Chinese New Year  is a time for fun, frivolities and some very unusual superstitions.

But the changing social, migration and economic realities of modern China mean that bizarre and fascinating things happen when a huge portion of the world’s most populous country goes on the move.

Train tickets (even the dreaded standing room cars!) are nigh on impossible to get for certain days. Long-distance buses are packed to the gills. Even cheap flights are tough to find.

So what, in short, is going on here?

First, a quick primer: "Chinese New Year" is just one of a handful of terms for the celebration of the turning over of the lunisolar calendar, which occurs in late January or early February every year.

, which is technically a verb meaning to celebrate the holiday but often gets used in conversation to represent the event itself as well. 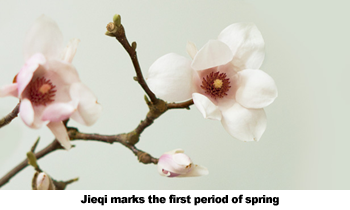 Doesn’t it seem weird that “Spring Festival” is celebrated during possibly the coldest part of the year? As a person who despises cold weather, the reasoning behind it is interesting.

The term “Spring Festival” only came into common use about 100 years ago, before which it referred to the first period, or 节气 (jiéqi)

, of spring on the lunisolar calendar.

There are 24 jiéqi per year, and the calendar planners thought it wise to begin the year with spring, hence why “Spring Festival” takes place is possibly the coldest part of the year! 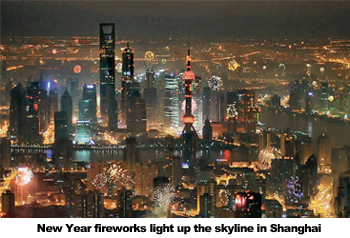 Anyway, there are such a huge number of ancillary festivals, important individual days within the holiday and other ways to celebrate Chinese New Year that it’d be folly to try to get into them all here.

It’s essentially a two-week holiday with distinct individual celebrations on each specific day, but aside from common ones like setting off fireworks (happens on a huge scale in the Mainland and HK) and big family gatherings, specific foods are always eaten, often ones with names that sound like some sort of positive word. 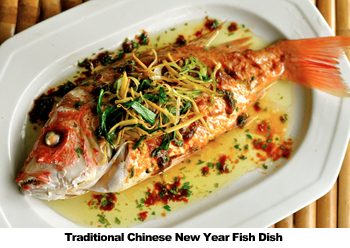 People always eat fish, for example, because the word for fish, 鱼 (yú)

sounds exactly like the auspicious word for extra excess or surplus, 余 (yú).

It’d essentially be like Don Draper (played by actor Jon Hamm) fans eating ham at the start of every Mad Men season or something – I don’t know, maybe people do that anyway, I don’t watch that show (or eat ham).

It’s a Chinese play on words, similar to the superstition surrounding 四 (sì)

- death, and the avoidance of many types of number four-related activities and buildings.

Moving on, Spring Festival is far and away the most important holiday on the calendar in China and countries with large Chinese populations like Singapore, Malaysia and Vietnam.

That’s in part because it’s been around for an extremely long time—some 4,600 years by most estimates—making it one of the world’s oldest continually-celebrated holidays.

This leads to the transportation chaos we mentioned earlier. 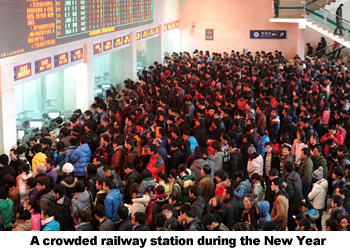 The result: People end up camping out in lines (in January, mind you) outside ticket offices like so many Cameron Crazies or Harry Potter fanatics (Potter Patrons?? Harry Heretics??) just for the chance to head home for a week or so.

It’s all part of the largest regular human migration in history, known as 春运 (chūn yùn).

Billions of passenger journeys are made during the multi-week travel period: a difficult number to wrap your head around.

Let’s look a bit deeper at why the heck this happens. 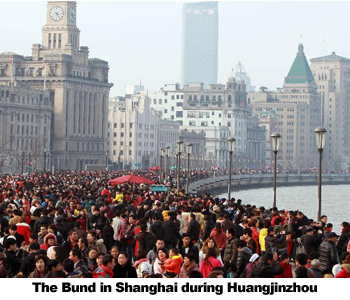 First, holidays in China are weird.

There are really only two breaks of consequence, known as “Golden Weeks” – 黄金周 (huángjīn zhōu)

, in which the central government mandates 7 consecutive days off for workers.

One is for the October National Day holiday (though this only became official policy in 1999) and the other is for Chinese New Year, by a wide margin the most important day on the calendar.

Not unlike Christmastime in the West, the tradition for Chinese New Year is to head home to relax with the family.

For an enormous, developing country like China, though, travelling long distances is much more difficult than a simple jaunt down I-95 – hence the madness every January and February.

The second part of the equation here is the enormous internal migration that has happened in China over the last several decades.

In short, industrialization and globalization came to China’s coastal, urban areas first, drawing hundreds of millions of people from that nation’s interior with the promise of city jobs, amenities, and much higher standards of living.

As a result, much as with my hometown of Washington, DC, a huge portion of the residents of most cities aren’t actually from there, and often travel far and wide to return to their hometowns for the New Year holiday break.

It’s like Thanksgiving and Christmas combined and then given 1990’s baseball players-levels of steroids – you gotta see it to believe it. 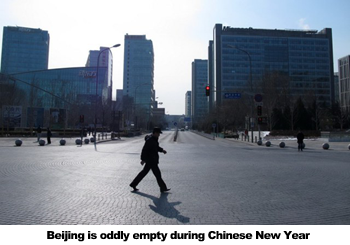 In my book, though, the most interesting part is how mammoth mega-cities like Shanghai, Beijing, Shenzhen and Guangzhou become relative ghost towns for a few weeks each winter – it is truly surreal to see places defined primarily by their energy and crowdedness suddenly become serene and quiet.

- literally “outside place people”, primarily work in industries like service and construction. When they all head home, you’ll see stores that are open 24/7 the rest of the year shut down entirely for Spring Festival. It’s the strangest thing.

Shanghai goes eerily silent and gets noticeably cleaner as construction on the city’s myriad office and apartment buildings ceases.

Tables at open restaurants in much of the city are easy to get, but here’s the kicker: tourist hotspots like the Bund, Yu Gardens, and People’s Square are jam-packed.

In this day and age, it seems, China has become a country where travel and tourism supercede even important traditions like Spring Festival.

<strong="">What have you observed during this crazy time of year? Anything particularly bizarre? Let us know in the comments below!</strong="">