American fast food brands have made a big impact here in China, and nearly every city features at least one KFC or McDonald's; bigger cities, in fact, are practically littered with American fast food outlets (my block has 2 Starbucks', and McDonald's delivery drivers are ubiquitous on the Shanghai streets).

While the menus are generally pared-down versions of their American counterparts, there are some crazy foods available that adapt American cuisine to a Chinese audience and tend to come out...a bit strange. Here are my 5 favorites!

(Disclaimer: They're not my favorite in the sense that I enjoy eating them, but rather in that I find them hilarious or interesting.) 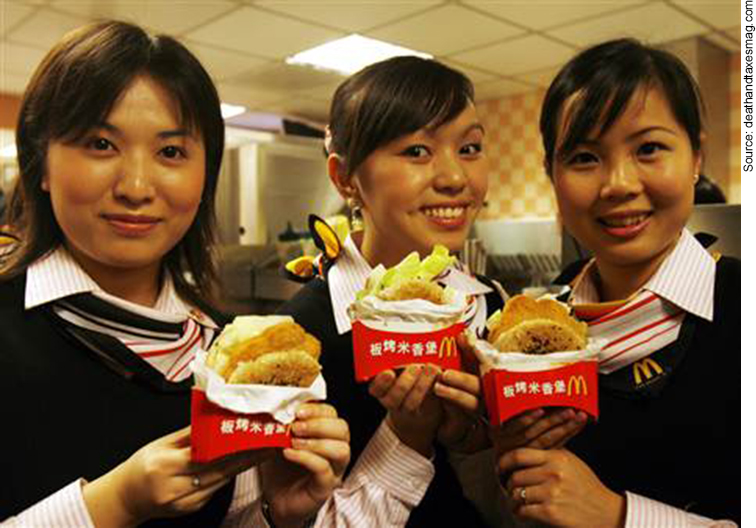 McDonald's in China features all the standard favorites like Big Macs and Chicken McNuggets (not to mention the fact that they deliver 24 hours a day...it's so glorious there's even a song about it), but also some seriously localized items.

Foremost among these is the Shrimp Patty Burger, which is mashed shrimp meat pressed into a patty and served on a burger bun.
I'm told it's actually not that bad, and has a unique zing to it...but it’s a bit tough to get over the concept of it!

They aren’t available in every McDonald’s, though I see it from time to time here in Shanghai and it was featured prominently on the menu of the McD’s I went to in Sanya, Hainan. 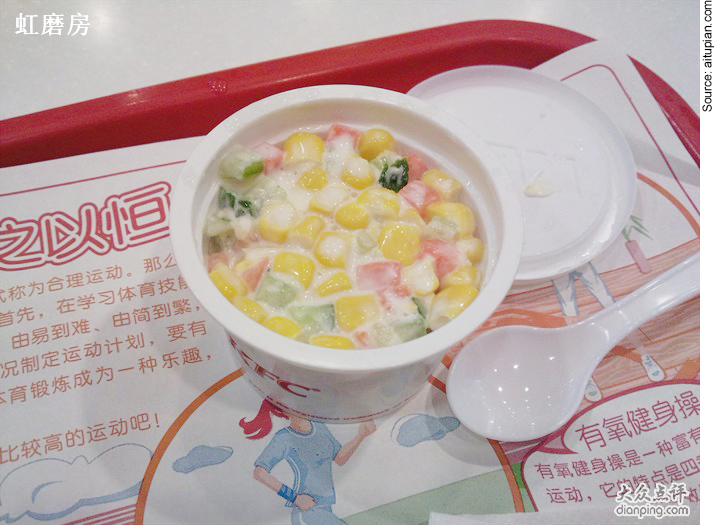 KFC is enormously popular in China, a country known for its chicken proclivity.

Almost every office party or gathering I’ve been to has featured various KFC products as the food offerings, and there’s one in every last shopping mall and train station in China, it seems.

Their menu is actually pretty similar to that of the US outlets, with a couple exceptions, most notably the cold corn cups.

This is a side dish that, while not particularly odd, is pointlessly bland and unappetizing.

I mean, for real guys, corn cups? Not even on the cob? And cold?

It comes in a lot of forms, including a milky soup-like side dish/dessert. 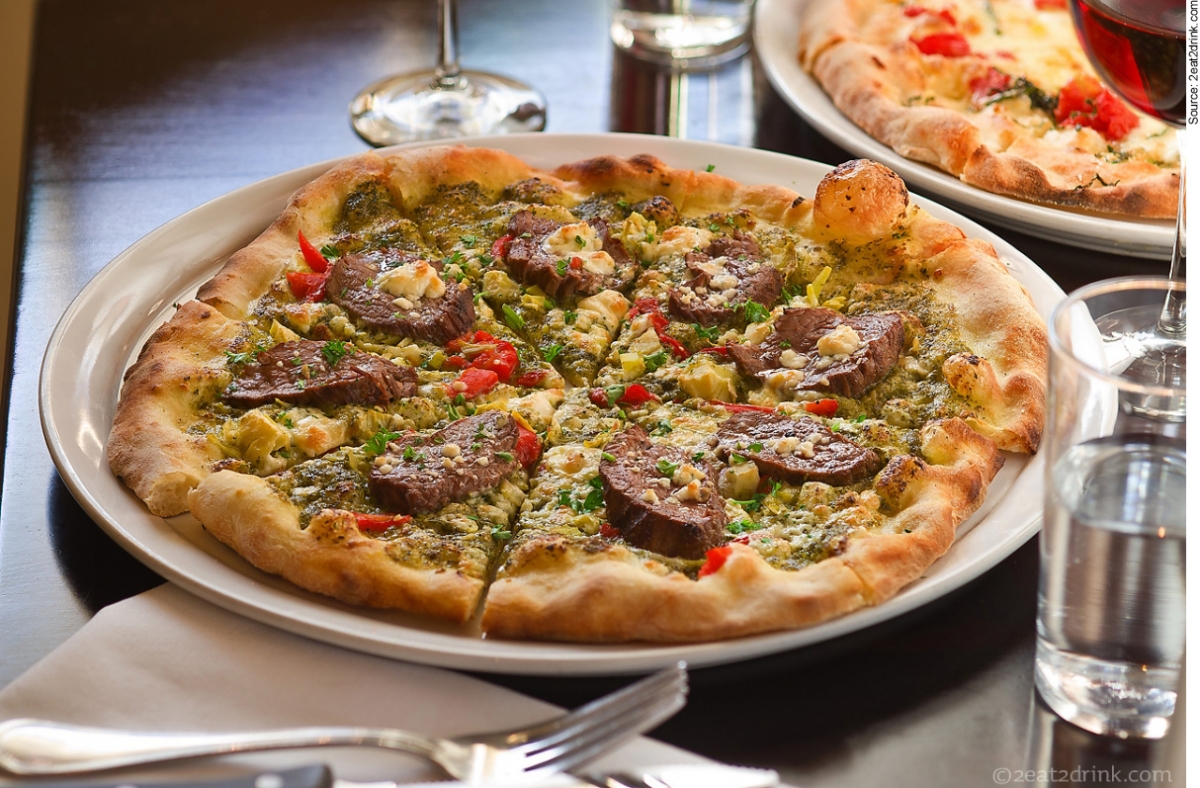 It’s worth noting that Pizza Hut in China has little in common with American Pizza Hut.

It’s much more upmarket, and is considered a good mid-price sit-down restaurant, though it’s still located mostly in malls and other retail plazas.

The menu item I found strangest was the Texas beefsteak pizza, a personal-sized pizza covered in very tough, oddly spiced bits of steak.

I’ve gotta be honest, it’s actually pretty good! Something about the flavor and texture of their “steak” works well with pizza, somehow.

[Note: comically, their “Chicago-style” pizza is deep dish, but it features deep, thick dough rather than thick sauce and cheese. As any proud Chicagoan would tell you, that’s not Chicago-style pizza!] 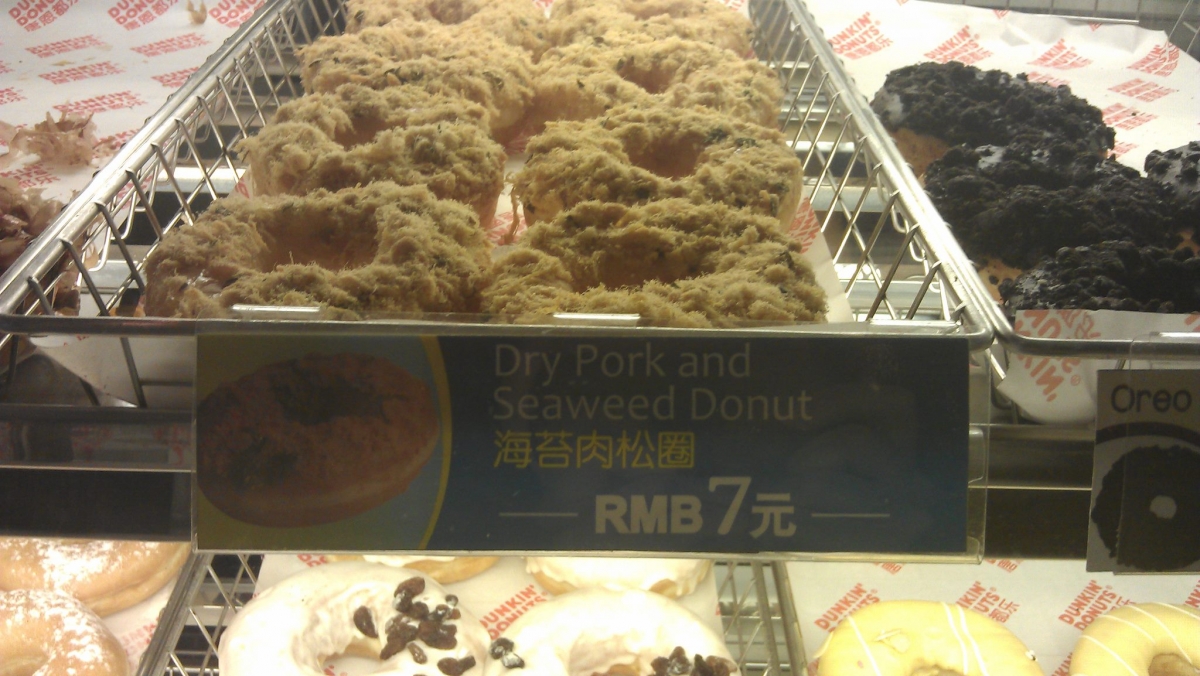 I randomly came upon this one day last year and did a bit of a double take, if only because everything else on offer seemed pretty normal.

• pork (I don’t eat pork personally but would it really go well on a sweet dessert?)

• DRY pork (“hey guys, let’s take this meat and dehydrate it until it’ll taste good on a donut...somehow”)

I dared my girlfriend to try it, but she opted for the adjacent but much lamer and less adventurous Oreo donuts. 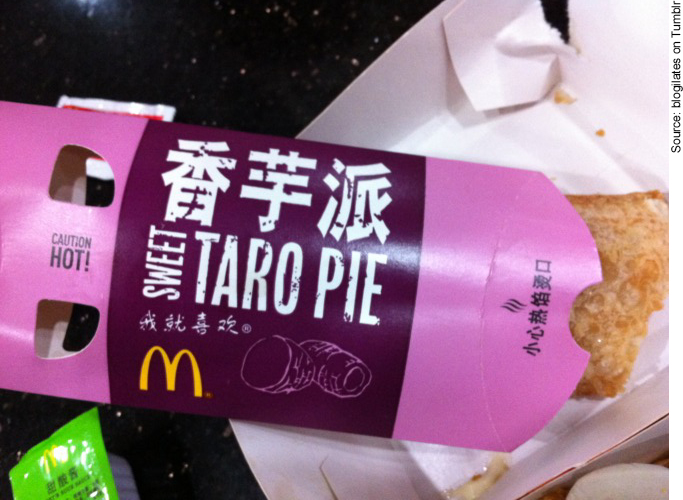 A staple of every desperate, tipsy man’s 4:00 AM McDonald’s delivery order, the taro pie is actually a pretty tasty dessert treat, though it’s something of an acquired taste.

It’s just like a McDonald’s apple pie you’d find in the States, but instead of sweet apple filling, it contains sweet taro, a potato-like vegetable that’s a staple food in much of East Asia.

It’s kind of purple and the McDonald’s version is sweetened a bit too much, but it’s a nice way to top off a meal you’re going to regret eating anyway!

Not sure if it’s available in the US but Chinese McDonald’s outlets also have pineapple pies, which are magnificent. 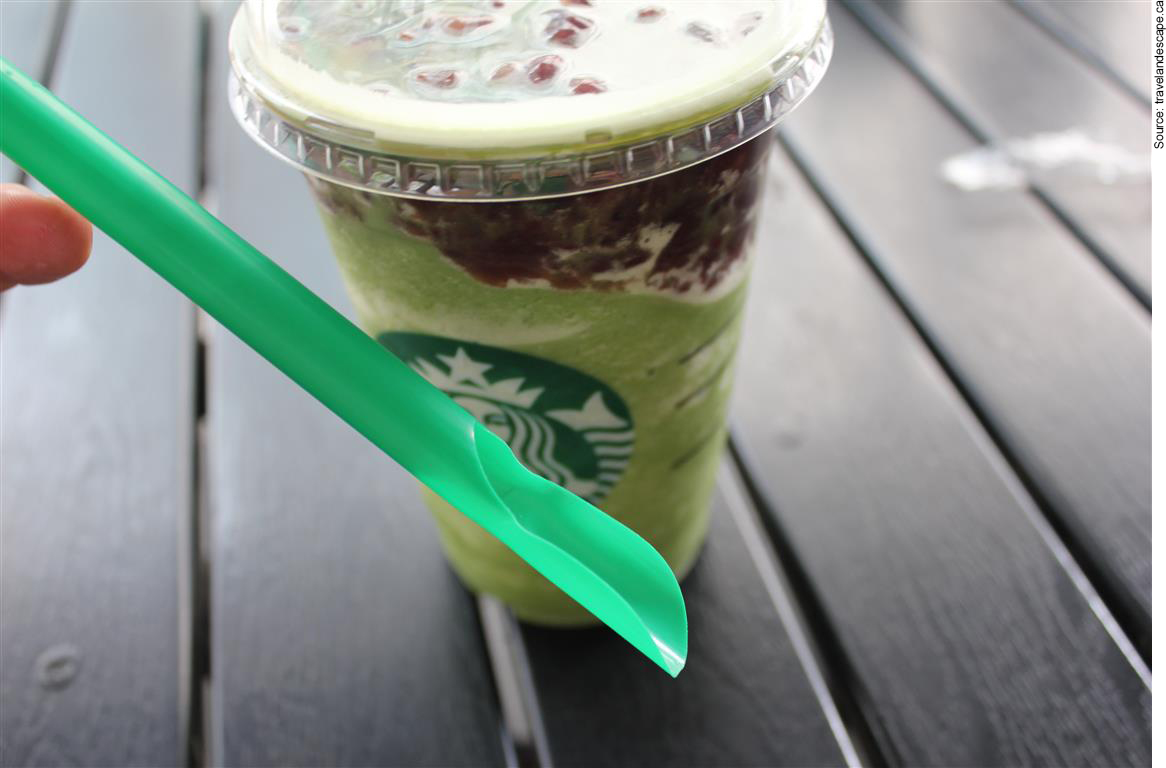 Red bean (hóngdòu, 红豆)  is a common ingredient in Chinese adaptations of Western food, especially inexpensive pastries – many a time I’ve reached for a chocolate roll in a convenience store only to find that’s it’s filled with a slightly sweet red bean taste instead.

Starbucks takes it to a whole other level, though, with a blended red bean and green tea frappucino.
Like most people, I love a good frappucino on a hot summer day, but this was pretty disappointing. I think the problem derives from how the red bean has a very paste-like consistency that you can taste remnants of even after blending, as well as the fact that red bean paste just isn’t very good to begin with, in my opinion.
We’ve covered some bizarre stuff today and I’d love to hear the craziest (or most delicious) versions of Western fast food you’ve heard of in China. There’s tons more wild stuff out there, so let me know about it in the comments!