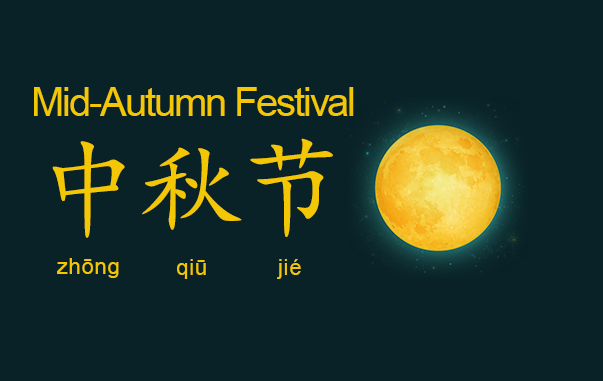 What is the Mid-Autumn Festival?

hot and muggy days of summer, the country has been gearing up for what’s known as the Mid-Autumn holiday for weeks now.

Festive lantern decorations are hanging in shop entrances and apartment building lobbies. Public transportation is filled with advertisements for various kinds of mooncakes. Travel agencies and websites are encouraging everyone to take advantage of the holiday to do some traveling.

中秋节 (zhōng qiū jié) is both a centuries-old Chinese holiday and an important one in modern Chinese culture. As someone who’s learning Chinese or is interested in China, you ought to know a thing or two about it, even if you’ve never been in China to experience it first-hand.

There are a lot of different traditions and stories behind the holiday, but as it is celebrated today in most of China, it can all be summed up by four main activities: admiring a full moon, giving and receiving mooncakes, getting together with loved ones, and taking a vacation.

Below are some basic explanations of those four things, along with some related Chinese language for you to add to your growing vocabulary, according to your level.

(Tip: If you want to make sure you pronounce the pinyin in here correctly, use Yoyo Chinese's free video-based pinyin chart. It has audio demonstrations of all Mandarin sounds and video explanations for some of the more difficult sounds: link).

The holiday falls on the fifteenth day of the eighth month of the traditional Chinese lunar calendar, when there’s a big, bright full moon.

In the past, people would gather together to celebrate the harvest or to make offerings to the moon, but these days, most people just gather together with friends and family to enjoy the view of the moon together.

The moon being full and round is not only something to be admired, but also a symbol of unity and completeness. 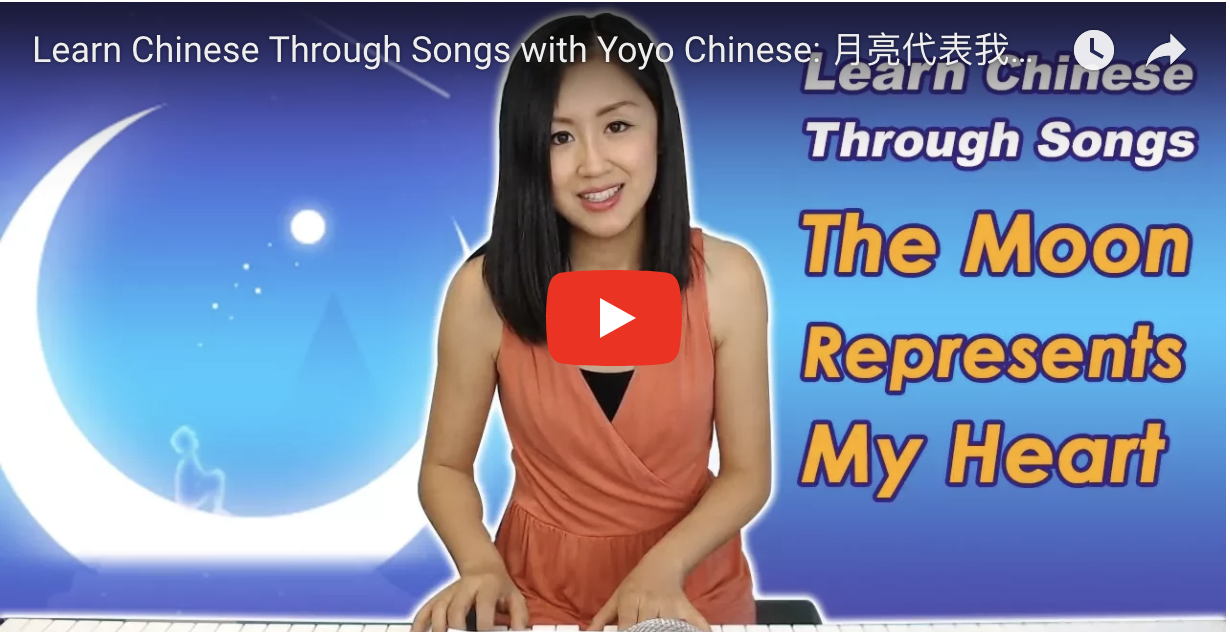 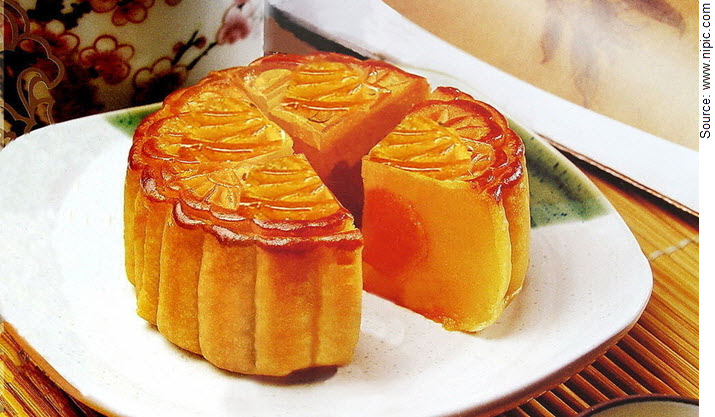 This time of year, the whole country goes mooncake crazy!

Most people will buy a range of mooncakes during the season to give to the various people in their lives.

Check out this awesome hangout where Yangyang and Jason - Yoyo Chinese Product Manager (and Mandarin enthusiast for 10+ years) - do a blind taste-test of mooncakes:

For that average acquaintance who doesn’t need to be impressed, you can buy a plain mooncake in basic packaging.

For someone who you need to impress, say, an important client, you can buy a box of super elaborate and pricey mooncakes in extravagant packaging.

Most people will receive so many mooncakes that they will still be eating them days after the holiday has ended, even if they are sick of them by then.

Many apartment and office buildings will also organize some kind of recycling initiative to help people feel a little less guilty about the amount of waste that’s associated with this tradition.

That's because even a mid-range mooncake is usually wrapped in a layer of plastic, put inside a plastic tray, and then covered in a cardboard box. Not to mention the amount of packaging that goes into making the high-end mooncakes look fancy is truly amazing!

Since they are round like the full moon, these traditional Chinese pastries are also a symbol of unity, and are eaten together with family and friends.

Not everyone especially likes traditional mooncakes, which are flaky crusts filled with lotus seed paste or red bean paste, but there are so many different varieties of fillings and crusts now that there is something to suit everyone’s palate.

• Watch this video about Hong Kong’s “ice skin mooncakes,” which is part of the awesome TV documentary series called “A Bite of China.”

Time with family/loved ones 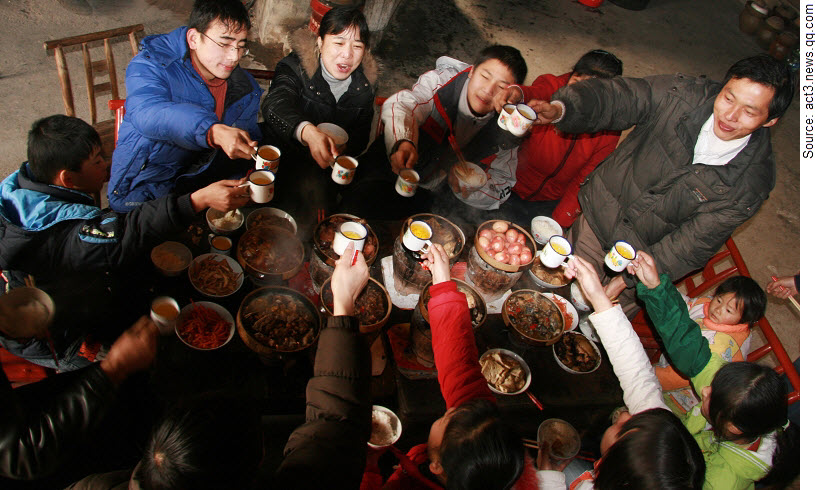 Similar to Thanksgiving in the U.S., Mid-Autumn Festival is one that’s best spent in the company of family.

“Reunion” is definitely a big theme of the holiday, and those who are living elsewhere will generally try to make it back home for a big reunion meal followed by gazing at the moon with their family.

A legend that’s told this time of year, the story of a champion archer named hòu yì (后羿)

, is centered on this idea of reunion.

There are several different versions of the story, but the gist of them all is that cháng é took an elixir that caused her to become an immortal living on the moon, forever separated from hòu yì.

He began offering her food and praying for her well-being during the Mid-Autumn full moon, and soon the tradition caught on.

Now cháng é, the goddess in the sky, while she’ll never be reunited with her husband, receives offerings each year from those below who are fortunate enough to be with their loved ones.

In our Intermediate Conversational Course, we have two Units -- Unit 54 and Unit 55 -- devoted to discussing the Mid-Autumn Festival, covering important Mandarin grammar and vocabulary along the way.

As in the rest of the course, we use a mix of real authentic interview footage from the streets of China, paired with Yangyang's clear explanations of the dialogue.  On these Lesson pages of our website, there are also audio reviews, flashcards and the Dialogue Replay study feature to help you break down the new vocabulary and language points.

Take a sneak peak at this lesson from the Yoyo Intermediate Conversational Chinese Course on Mid-Autumn Festival for free:

• If you only ever learn one classical Chinese poem, it should be this one by Lǐ Bái about gazing at the moon and reminiscing about this home.  It's one of the most famous Chinese poems of all time:

chuáng qián míng yuè guāng
Moonlight reflects off the front of my bed.

yí shì dì shàng shuāng
Could it be frost on the ground instead?

jǔ tóu wàng míng yuè
I look up to view the bright moon ahead.

dī tóu sī gù xiāng
Thoughts of my hometown bring down my head.

(Click this audio icon to hear the whole poem recited together:

A little while back, Yangyang was on the hit Chinese reality TV show "Awesome Educator" 《我是先生》 (wǒ shì xiān sheng) along with two of her students.

At the request of the show's hosts, Sinclair bravely recited 静夜思 (jìng yè sī) and did a terrific job.  Watch it here:

Everyone gets just one day off of work or school in China for this holiday, but it’s usually at the beginning or end of a weekend, to make a three-day weekend.

And on some lucky years, Mid-Autumn Festival falls close to China’s National Day (October 1), giving people a whole week off.

Late summer or early fall is a great time to travel in China, so a lot of people take advantage of the time off and the good weather to go on a trip, often together with family.

• Watch this news report and see how much you can catch about traveling for the holiday, airfare deals, and the possibility of seeing the moon from the plane on a late flight!

In Hong Kong where I live now, there are sure to be lots of vacationers visiting from around China for the holiday.

The day off here is actually on the day following the holiday, in order to give people a chance to stay up extra late to gaze at the moon and play with lanterns without worrying about getting up early for work or school the next morning.

So how will you be celebrating the holiday? Let us know in the comments section.  No matter where you are for the holiday, I hope you get a chance to enjoy the moon and wish your Chinese friends “zhōng qīu kuài lè!”