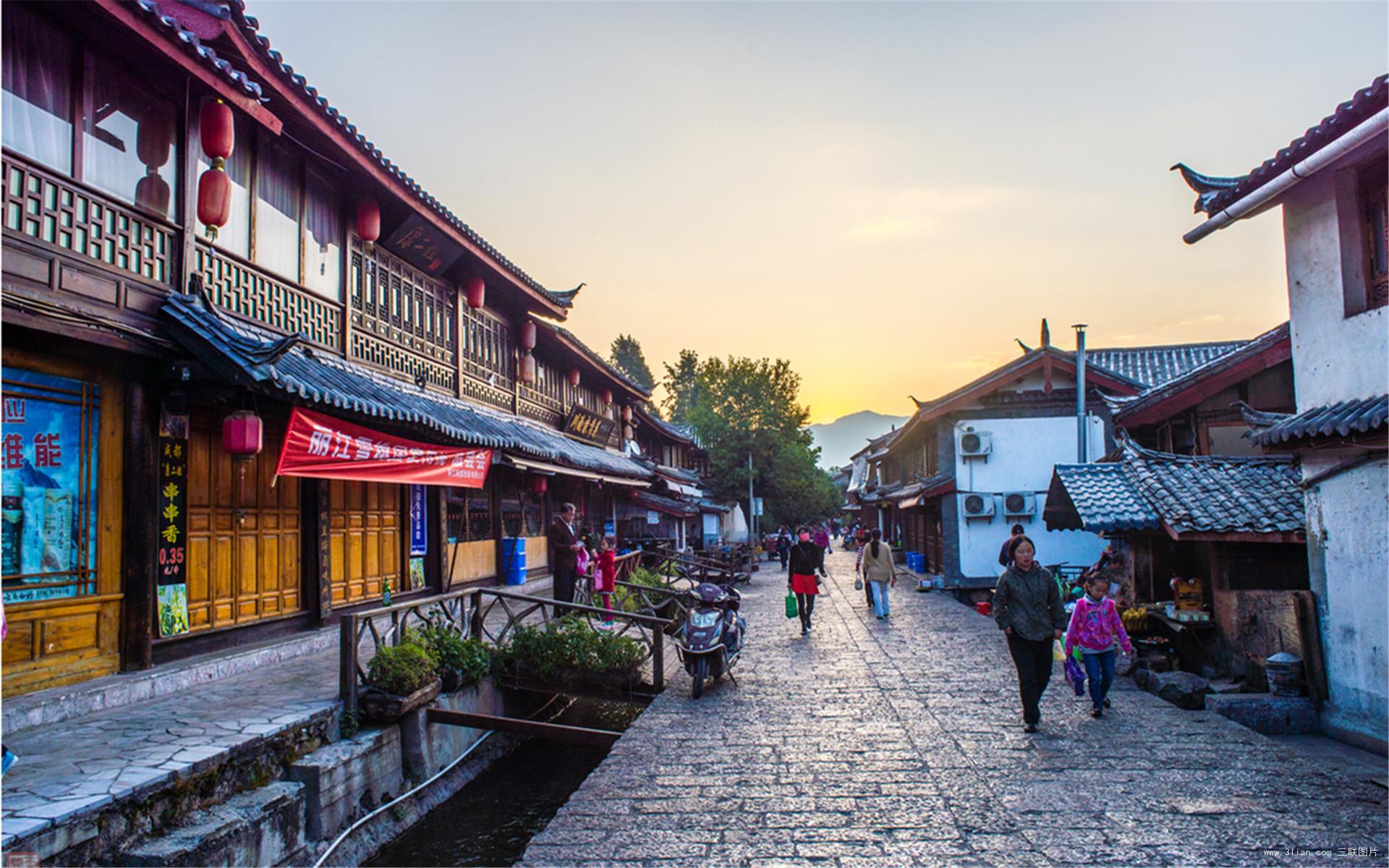 Along with all the crazy stuff we usually write about here, history and culture are probably some of the top reasons people visit or choose to live in China.

The country is chock full of must-see historical sites as well as overrated boring ones, but how do you sort the wheat from the chaff?

No worries, I’ve done it all for you!

Below is my personal list of the top 10 historical sites in China (in an order I’m going to claim is meritocratic but is actually totally based on my personal tastes and biases), enjoy! 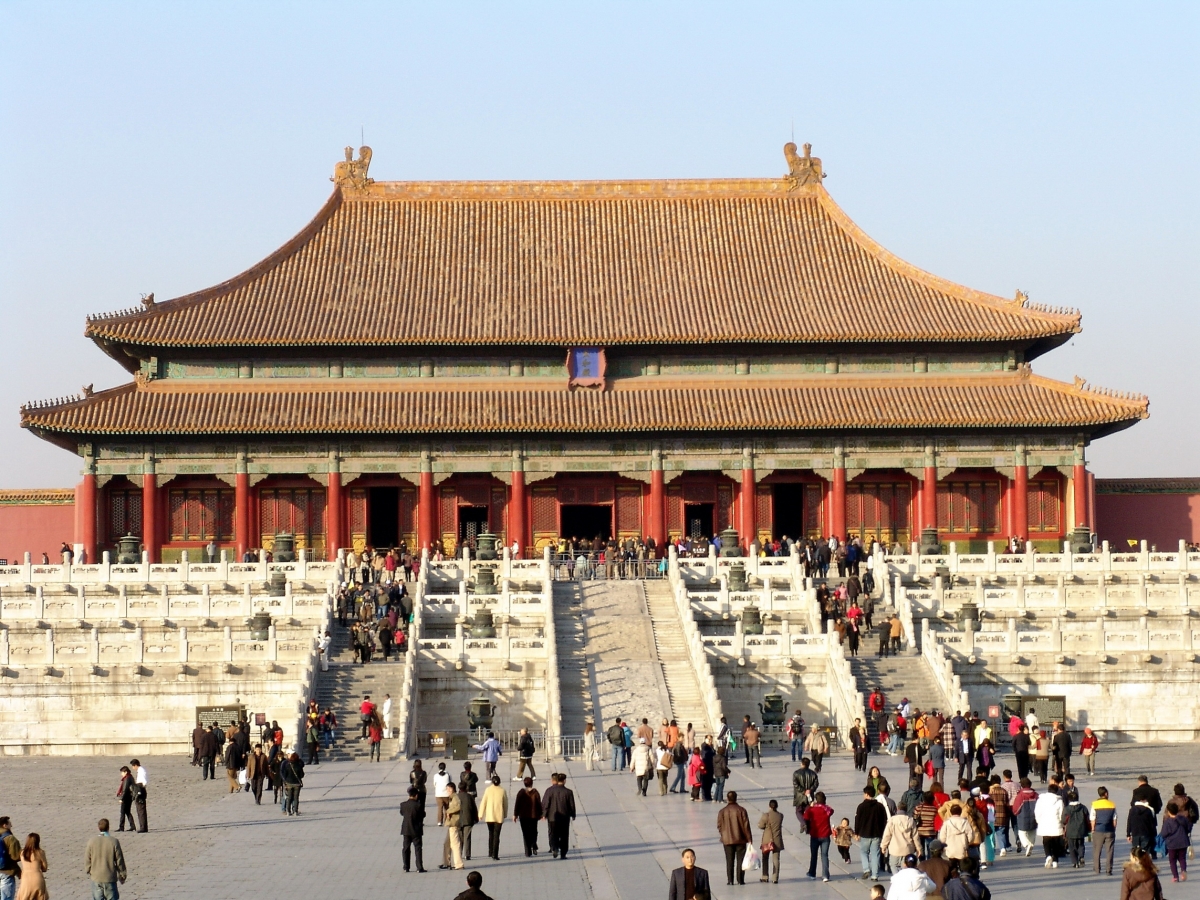 Though it’s one of the two or three most famous tourist attractions in China, I’m not a big fan of the Forbidden City.

For one, it’s always crammed full of tourists, but what turned me off the most is how none of the buildings are really real – they were all “restored” in the last few decades, and I’m told that they don’t even look like the original Forbidden City structures.

That said, it’s still a must-visit destination if you’re in Beijing.

Its importance to the city and the history of Chinese culture is absolutely enormous: it was the Imperial Palace until 1912 and was considered the foremost example of Chinese architecture and design. You can almost picture the hugely significant stuff that went down there for 600 years or so.

It also contains the pretty nifty Palace Museum, if you can fight your way through the crowds. 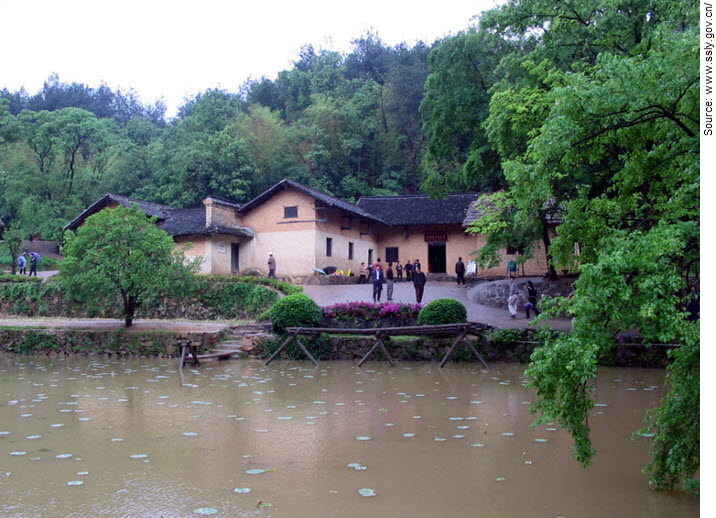 Shaoshan (韶山) is remarkable for its general unremarkableness – it’s a small town (by Chinese standards, which means it has around 100,000 people, a.k.a the population of Erie, PA).

Nestled in rural Hunan province, Shaoshan is mostly full of farms and other not-especially exciting stuff, save for one thing – it's the birthplace of Mao Zedong, one of the 20th century’s most important people.

It’s a fascinating place to visit for a couple reasons: it’s deeply profound to wander around and think about how such a humble place gave birth to a man who defined the “cult of personality” concept, and is as significant a figure in the 4,000 years of Chinese history as just about anyone.

In Shaoshan, you can go to his former residence and even see a not-very-flattering 30-foot bronze statue of the man himself.

Personally, though, I think it’s a choice destination for people-watching, as it’s engrossing to observe the sorts of people who make the pilgrimage there – older people, as you might expect, but also a surprising number of younger people trying to get a sense of a long-lost part of China’s not-too-distant past. 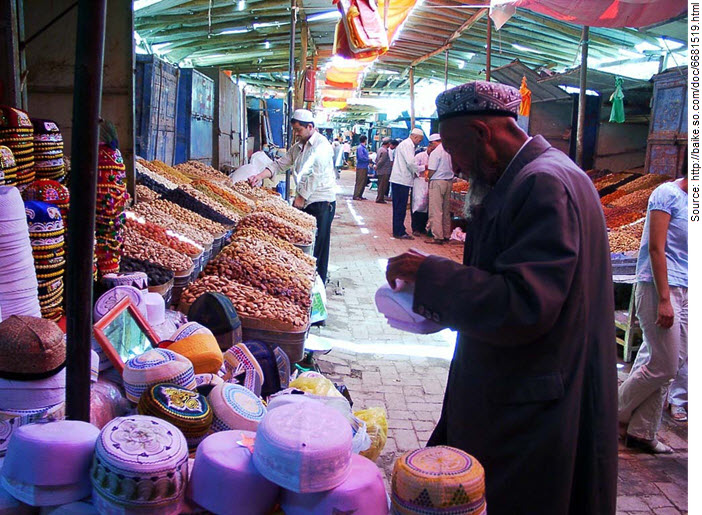 Xinjiang is probably the most interesting place in China: it’s where Central Asia and China meet.

The (occasionally hairy) collision of cultures is fascinating, if only because in urban Eastern China you rarely see Chinese culture genuinely interacting with other ones in concrete ways – in Xinjiang, and in Kashgar in particular, it’s a palpable mixture.

The Kashgar Bazaar is one of the world’s largest, and it really feels like a classic Middle Eastern market from a Lawrence Olivier movie, but with a ton of Chinese twists, including herds of animals sauntering around, refitted electronics and loud fake market-style bargaining sessions.

It was a massively important stop on the Silk Road for centuries, and is famously situated about halfway between Beijing and Rome. You can genuinely feel history and cultural blending at the Bazaar, to an extent that it’s a place you can sort of just stand around and absorb, which is really rare for a high-profile tourist site anywhere in the world. 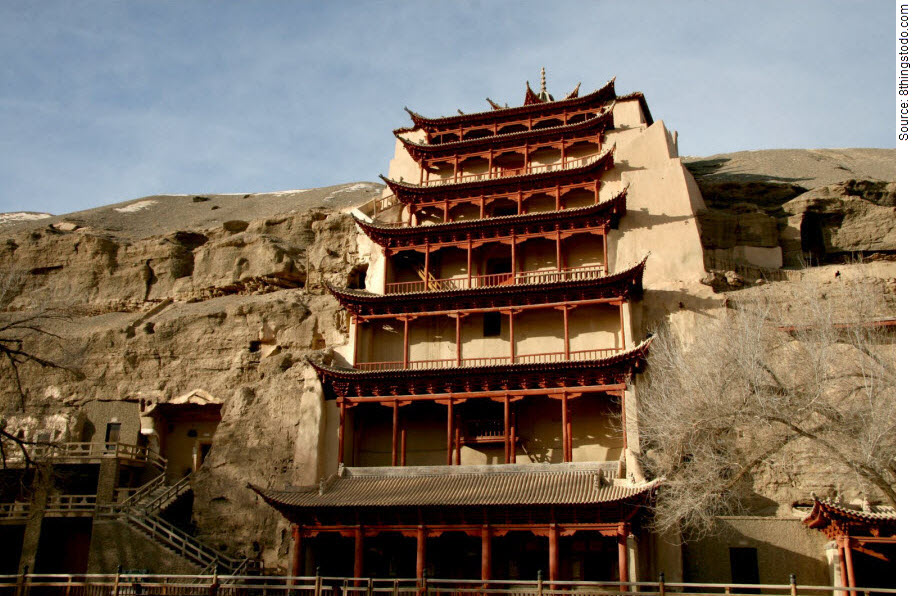 This series of hundreds of temples is built into the caves and rock faces of Western China’s Gansu province, adjacent to the ancient Silk Road route.

It’s hard to overstate the awe of seeing so many distinct temples and buildings built into natural features like that.

The Mogao site has been under the control of various groups, including the Tibetans, and was a key defense and commerce point on the Silk Road.

The Silk Road is, I think, super fascinating in its own right, connecting Europe and China so long ago that it took over a year to travel between them - a year!

I loathe my 14 hour flight between Shanghai and New York so much that I put off booking it until the last minute, but these dudes just set off for China even though getting there took 12 freaking months. Ballsy. 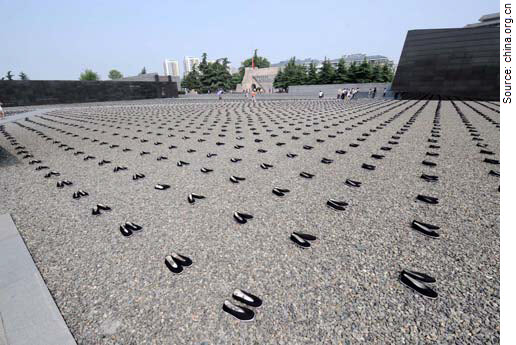 An incredibly sobering experience, to say the least.

The Nanjing Massacre, nán jīng dà tú shā (南京大屠杀) was the invasion and mass murder campaign carried out by Japanese soldiers in the late 1930’s, resulting in some 300,000 deaths.

A dark incident that continues to color relations between the countries, the Massacre is memorialized in this museum, which provides a detailed (if one sided) look at the horrors of the Massacre (also known as the “Rape of Nanking”).

It’s a modern, well-organized and very emotionally impactful museum. Visiting it reminded me of my first time at the Holocaust Museum in Washington, DC, which I went to as a kid when it opened in the early 90’s.

The Massacre Memorial does a great job immersing you in the time and place. As an outsider who didn’t know much about the Massacre, I came away much more informed and much more aware of the history behind the city and country I was visiting. 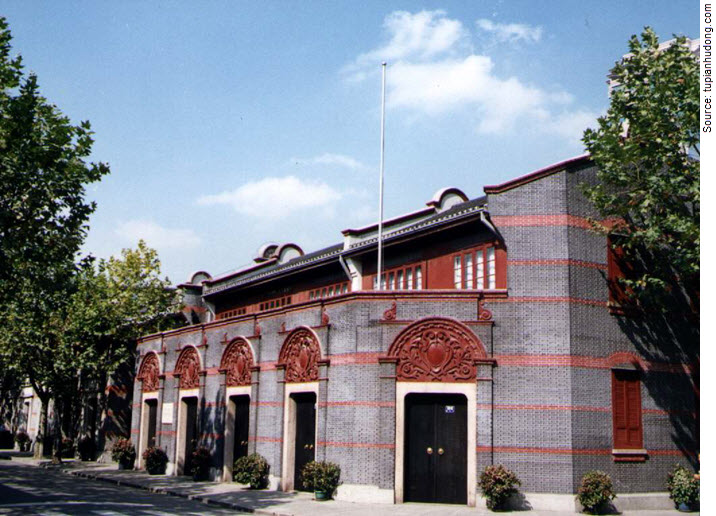 It may not look like much, but I’m a sucker for non-descript sites where important stuff happened.

Tucked away in a busy but otherwise not-notable Shanghai neighborhood, this building essentially gave birth to the Chinese Communist Party in 1921 and changed the course of history.

Inside they’ve restored the building to it’s 1920’s glory and included a small museum of Party history. Really interesting if you’re a modern Chinese history enthusiast.

The Congress site gets bonus points for convenience, as it hardly requires the pilgrimage that Mao’s Shaoshan birthplace does.

I also love the irony of the fact that it’s about half a block from Xintiandi, a swanky complex of high-end restaurants, nightclubs and apartments that is about as un-Communist as it gets. 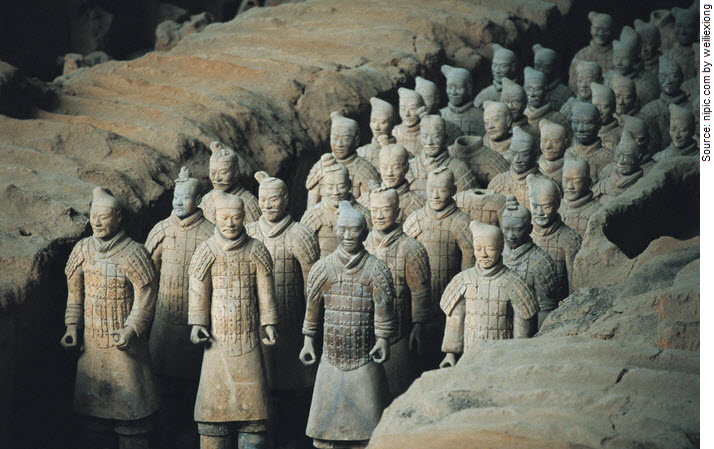 Not far from the large, modern city of Xi’an (very much worth visiting in its own right), the underground Terracotta Army (also often called “The Terracotta Warriors”) is actually the Mausoleum of the First Qin Emperor, who was buried with over 8,000 full-size terracota figurines some 2,200 years ago.

It’s an amazing site to see in part because of the pure scale of it all: the tomb is almost a mile and a half long and contains hundreds of chariots and horses to go along with thousands of the warriors themselves.

The more recent history is also interesting: the tomb lay undiscovered for millennia until the unimaginably futuristic year of 1974, when a group of farmers digging a well stumbled upon it.

I also love how, because Qin Shi Huang (秦始皇)

was the first real emperor of China, the Terracota Army set an exceptional precedent for leadership afterlife decadence (“just bury me with 8,000 intricately-made terracotta soldiers, IS THAT SO HARD?!”), and subsequent emperors and prime ministers have basically been playing catch-up ever since. 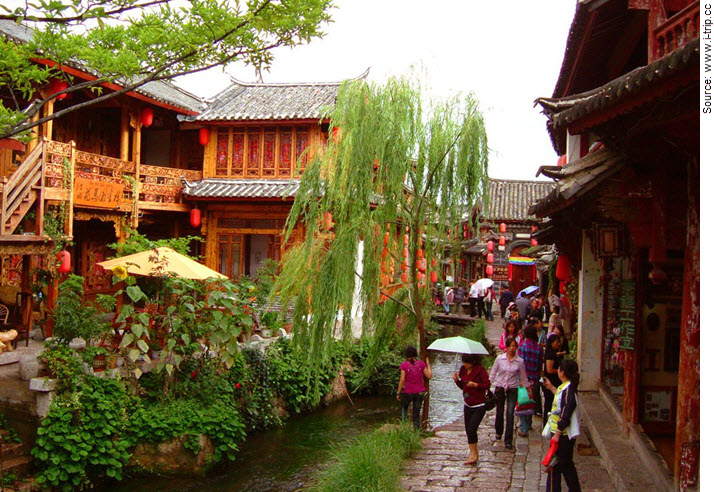 Not as visually impressive as other sites, the Old Town section of Lijiang is high on the list because it’s so well-preserved and has a really unique vibe about it.

It’s packed full of small waterways and bridges around them. Unlike a lot of historical sites in China that have been “restored”, it actually maintains its old, thousand-year old charm while still being a place you can walk around and enjoy.

As with most of Yunnan, Lijiang’s Old Town is home to a rare confluence of cultures, and feels equal parts Chinese and Southeast Asian.

The Old Town holds a special place in my heart because it was the first place I experienced true “foreign celebrity” status in China: though there are a small number of foreign travelers there, most of the people you’ll encounter are tourists from elsewhere in China.

As such, I ended up spending over two hours taking pictures with excited/confused/terrified kids and parents, and even signed a few autographs.

This era of foreigners being so noteworthy in China is coming to an end, but a few years ago it was still in full swing down in Lijiang. Head there yourself and see if foreignness still connotes celebrity! 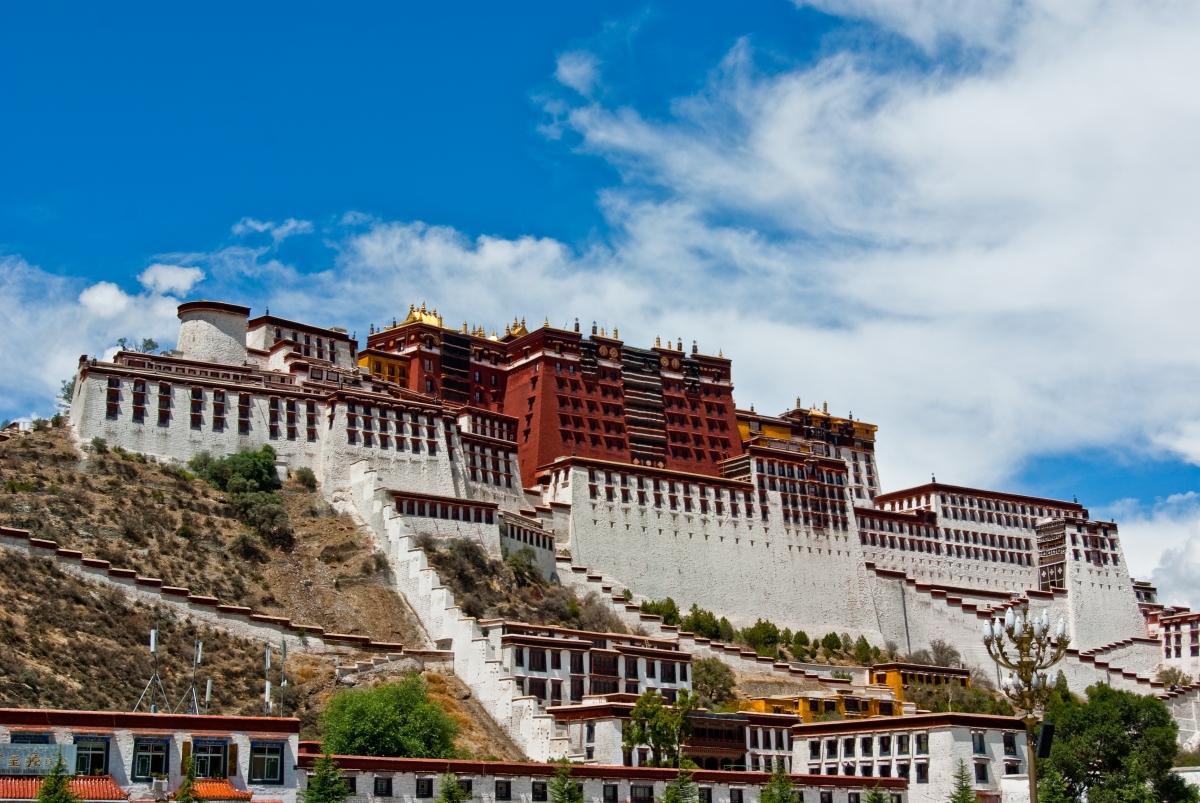 I’ll confess off the bat that I’ve never actually been to Potala – Tibet can be a tricky place to get into, and access is pretty much dependent on how often the area is in the headlines.

Potala is such a sought-after tourist destination, however, because of the amazing spirituality and history behind the place.

Construction dates to the 1640’s, but the site’s importance goes back much further: it’s named after the mythical Mount Potalaka, home of the central Buddhist figure Avalokiteśvara (say that ten times fast...or at all), and holds an important place in Buddhist history and culture.

The Potala Palace has also been restored in a much more subtle, respectful and accurate way than most other historical landmarks in China.

Though it began in 2002, Tibetan authorities were careful to use only traditional building methods and materials to preserve the Palace’s look but still allow access and ensure it survives the harsh, high-altitude conditions.

Some of the appeal is also the exclusivity: there is a daily quota of visitors (depends on the season, I believe), and it often gets reached by lunchtime, which means if you want in, you have to get there bright and early. 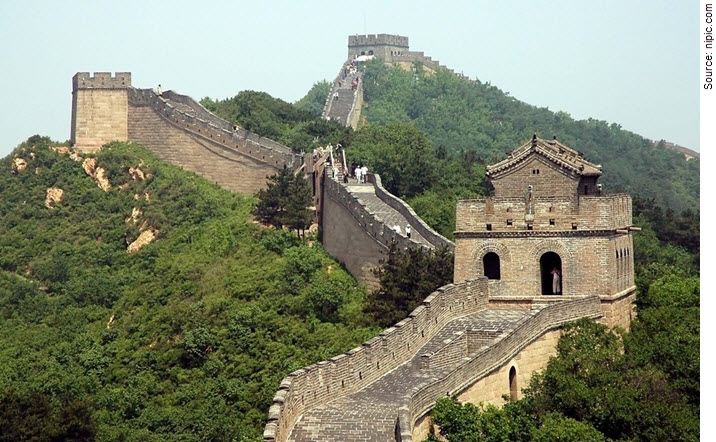 It may be China’s best-known tourist attraction, but it’s for a good reason - the Wall is truly a spectacular site.

Situated an hour or so outside of Beijing, the Wall isn’t really just one site - there are about a half dozen well-known sites with good tourist infrastructure in place, but obviously the Wall itself runs for thousands of miles.

The best way to experience it is to wander away from the tourist-heavy, restored areas and find the quiet, run-down parts of the Wall - these are the original sections that have seen little restoration, and will give you the best idea of what the Wall was really like back in the days when stopping Mongol invaders was a top priority.

My favorite section of the Wall is probably Mutianyu (慕田峪)

. It receives its fair share of tourist traffic in the summer, but in the winter it is all but abandoned, and features a harrowing-but-gorgeous cable car ride through the area’s gorges.

Honestly though, just about anywhere on the Wall will do; the pure architectural scale is always on full display, and it’s so impressive that they were able to build something this big so long ago.

Anywhere you go, there are plenty of chances to climb to the top of the guard towers and look out over the surrounding hills and mountains and think about what it must have been like hundreds and hundreds of years ago to keep watch.

Now that you know about my favorite places in China, are there any on that list that you've visited? Or maybe there are some unmentioned places that you think deserve a spot in the top 10. I've love to hear about it in the comments section below!