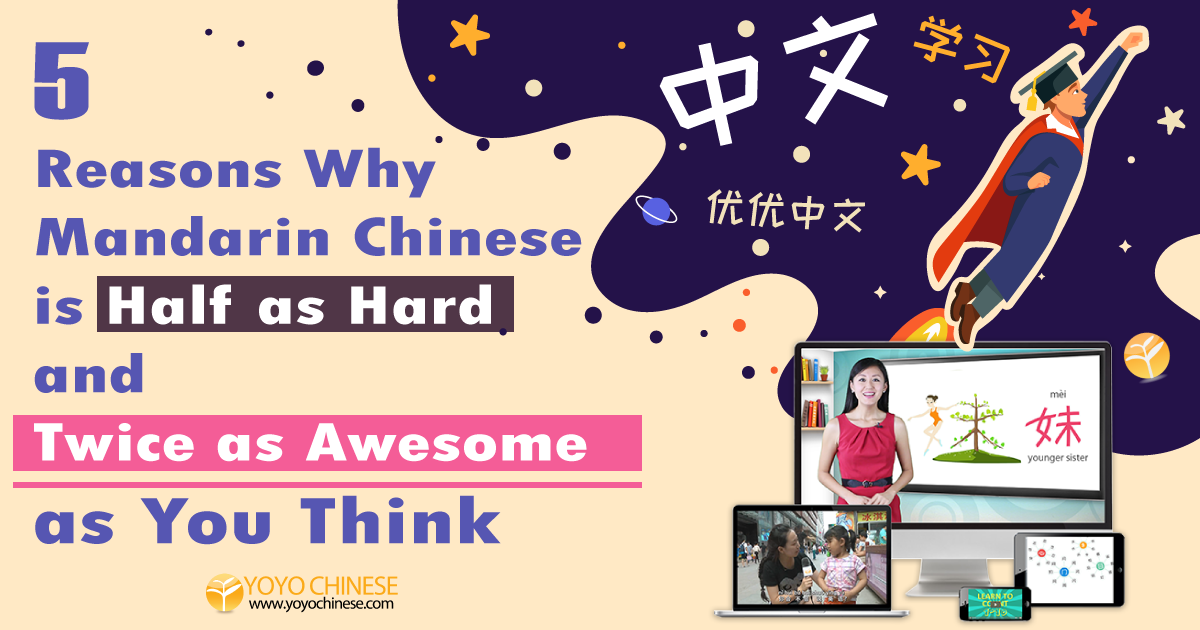 Ask any native English speaker what the hardest second language is to learn, and they tend to drift towards Asia or the Middle East. One look at Sanskrit leaves most second language learners waving a white flag, and Japanese’s three writing systems could intimidate anyone.

However, mention Mandarin, the language with the dreaded “tones” and complex character writing system, and no one will contest its difficulty.

No one, except me.

(And probably all the other writers on this site, come to think of it.)

In fact, there are many reasons I find it easier than several other second languages typically deemed simple for English speakers, such as Spanish or German.

Don’t believe me? Read on. These five key points may leave you saying “adios” to your romance language and “你好 (nǐ hǎo)

- hello” to an incredible learning adventure.

Yup, that’s right. No memorizing “o, as, a, amos, ais (just in Europe), an”. No more different versions of verbs depending on the past, present, and future. No more "today I’ll go", "yesterday I went", "tomorrow I will be going". Nada.

Not  “will be going to”, not “went to”, just “go”. We talk more about this in this lesson from our Beginner course.

All those boxes of six kinds of one dang verb your Spanish, Italian or other second language teacher taught you, all those hours of progressive, past progressive, perfect, pluperfect (what is that, anyway?) and progressive future tenses, all those endless irregular verbs that haunted you into the wee hours after your late night study sessions... GONE.

Let that sink in for a minute.

Now finish the article, I worked hard on this.

2. The Grammar Structure is Similar to English (or dealer’s choice)

When constructing a sentence in English, there is a certain order that users tend to automatically place parts of speech as they formulate ideas. For example:

"Today I went to the store."

There are some other versions of this sentence that would work (I went today to the store), but I would say that, for all intents and purposes, this would be the most effective in conveying a complete, independent thought in Standard American English.

In Chinese, the lineup (or “word order”) of ideas is very similar:

- Today I went to the store.

No, tones are not as hard as you think.

Yes, they are masterable by foreigners, and they actually help the learning process.

In fact, I like tones more than English words, as it makes it possible for most Mandarin words to be only two to three syllables long. Give that some thought.

Check out our unique approach to mastering Mandarin tones by practicing with their English equivalents with this free lesson.

There is one other great big bit of awesome in this sentence - the fact that there are no articles! The sentence is literally "Today I went store." (了 (le) is a particle for indicating an action has been completed).

Mandarin often does this - using context instead of annoying tiny little words like "to" and "the" - to keep its sentences as simple and to the point as possible.

To top it all off, the word order is exactly the same as the English version of the sentence.

The time and subject are interchangeable in a sentence, so if you blank out and accidentally say “I today went to the store,” No. One. Cares.

Compare that to the chorus of people who would brusquely correct the English-as-a-second language student who dared utter the sentence above. The death stares I am imagining would send me back to my home language in a millisecond.

Good thing Chinese people are so encouraging to second-language learners (seriously, if - I mean when - you visit China, you’ll see what I mean)!

The similarities between English and Mandarin don't end with sentence structure though. It keeps on going as we explore modifiers (adjectives and adverbs for you soon-to-be language people).

3. Modifier placement is the same in English and Chinese

Have you ever taken Spanish, or maybe Japanese? Then you know they both place their adjective and adverbs, or modifiers, a little bit differently than we do in English.

For example, if I’m talking about a cute little black kitty sitting in the sun, I’ll say “el gatita negra” in Spanish. Notice the color describing the cute little feline is after “kitty”.

However, when I say that in English, I’ll the say “the black kitty”, with the modifier (black) before the noun. It would be really weird if I said “The Kitty Black” (sounds like a bar).

It’s exactly the same in Chinese!

When you are placing modifiers in Chinese, ninety percent of the time, you place them before the noun or verb, just like you do in English. There are always exceptions to the rule, but that’s the case in pretty much any language. I mean, come on, the English language lives exceptions. Don’t even get me started.

Have you ever imagined what it would be like to learn the days of the week if you never had growing up? What about the names of months?

Sure, some of these names have some interesting stories behind them. “Wednesday” originates from “Woden’s day”, named after an all-powerful Germanic god (you may know him by his Norse name “Odin”). Similarly, December was named after the latin “Decem” for 10, since it was the tenth and final month in the calendar of Romulus.

But for someone just learning these names, none of that is very helpful, especially since the first story does nothing to tell you where exactly in the week Wednesday is.

What if the days of the week where named just sequentially? That is, "weekday one", "weekday two", "weekday three", and so on? What if it was the same for the months; "month one", "month two", "month three", etc.?

Well guess what, my friend.

In Mandarin Chinese (and Cantonese, for that matter), it is. See what I mean with this free lesson here.

When you want to say Monday, you literally say "weekday one". Blanking on how to say April? "Month four".

If the tears of happiness aren’t coming to your face yet, don’t worry; it keeps getting better. There’s one last reason choosing Chinese over another second language is best. Bar. None.

5. Using Mandarin Chinese is WAY More Impressive Than Other Languages

Think about all the times you've heard someone speak a second language, say, French or Italian. In particular, think of times when it was clearly not their own, though they still spoke it well - a friend ordering at an Italian restaurant, your buddy showing off some Spanish on a trip to Latin America, that kind of thing. You were probably impressed, but felt that, given time, you could do the same (or at least pretty close to it).

Now, imagine seeing someone you wouldn’t expect, say someone of African or Caucasian descent, open their mouth to fluently order for the table at a Chinese restaurant.

(Notice I said “imagine”, since you’ve probably never seen that happen before.)

If your imagination is anything like mine, the table is probably silent, the waitress is shocked, and all of you can’t believe what just happened. Next thing you know, a whole conversation has broken out trying to understand how exactly this person managed to grasp such an unusual (but now we know not necessarily harder) second language.

When you take the time to learn Mandarin Chinese as a second language, you impress the heck out of people. Although I’m giving you the good side of everything here, let’s face it, it is still learning a new language, and every language has it’s challenges. However, thanks to the other reasons listed above, it really isn’t as hard as you (or everyone else) thinks.

What are you waiting for? Let’s get started (for free)!

There is so much to be said for diving into learning Mandarin.

As a second language, its distance from English dissuades many potential learners from ever getting started, while the hidden similarities actually make it easier to get going. Plus, the absence of verb conjugations, as well as the simplicity in conveying many ideas, such as days of the week and names of months, give it a lot of advantages over learning other languages.

Everyone at Yoyo Chinese understands the hard times we are all going through in the wake of the worldwide COVID19 quarantines. To help you focus on something positive and study Mandarin during this worldwide challenge, Level 1 (45 lessons) of our Beginner Conversational Course is FREE, so you can start learning now.

I’ve been studying Chinese for over ten years, and I can tell you that these resources are amazing! 1,000+ video lessons organized into 6 structured courses, with 10,000+ flashcards and quiz questions, audio reviews, lecture notes, and clear explanations for everything you are learning.