When you first started learning Chinese, you were probably taught that "Chinese" in Chinese is 中文 (zhōng wén). Then eventually you heard someone use 普通话 (pǔ tōng huà) - or maybe 国语 (guó yǔ) - and thought, "Wait wait wait...what happened to 中文 (zhōng wén)?! What's the difference between it and these other ones?" 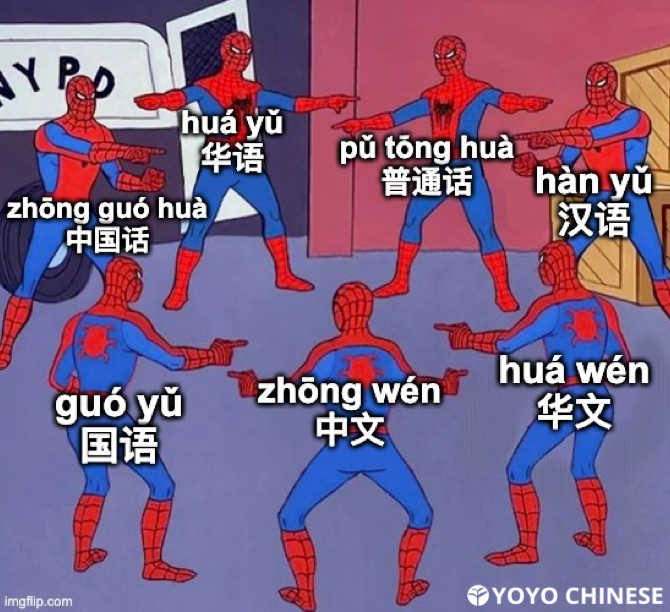 There are actually SEVEN common words for "Chinese" in Chinese! So let's break them down character-by-character to learn what they really mean, how they are different, and how to use them as a native Chinese speaker would.

is definitely the most commonly used word for "Chinese," and has the least specific connotation. Despite how the character 文 (wén)

is typically used to refer to the language as a whole - written and spoken. Also note that while it is most often used to refer to Mandarin Chinese, it technically applies to ALL of the Chinese languages and dialects, and is used to differentiate Chinese from languages like English or Japanese. So if you want to play it safe, you can just use 中文 (zhōng wén)

and you'll be just fine.

in that it also refers to Mandarin Chinese. But while people in Mainland China typically use the term 普通话 (pǔ tōng huà),

refers specifically to the language of the Han ethnic group. But don't worry, it's not as abstract as you might think. The Han people account for over 90% of the population of China, and their language is...you guessed it...Mandarin Chinese! As such, you can use 汉语 (hàn yǔ)

does sound a bit more cultured or formal. So say 汉语 (hàn yǔ)

if you ever want to sound like you know more about the Chinese language than you probably do!

in that it refers to ALL Chinese languages and is most often used to mean Mandarin Chinese. The only slight difference is that 中国话 (zhōng guó huà)

refers exclusively to the spoken language, and cannot be used to refer to the written language. Since it's a bit longer than 中文 (zhōng wén)

so you might never hear it or find the need to use it.

also refers to Mandarin Chinese, but only the spoken language; and it's a term that's only really used by people in Southeast Asia, particularly Singapore and Malaysia. So you'll probably seldom hear it used or encounter situations where you'd use it yourself.

has the same story as 华语 (huá yǔ),

but instead it exclusively refers to the written language of Mandarin Chinese.

Now you're an expert on seven different ways to say "Chinese" in Chinese! Hope you enjoy the sweet satisfaction one can only get from knowing when to use the right word at the right time! ^_^