Blog / Pinyin Pitfalls You Need to Watch Out For (Part 2)

If you haven’t noticed yet, pinyin can be pretty tricky! It’s not intuitive for foreigners because it wasn’t designed for foreigners.

Hopefully, the two pinyin pitfalls that I shared last week have answered a few of your burning questions and helped you clear a few hurdles.

This week, I’m going to introduce one of the trickiest pinyin quirks you’ll come across: rules for omission.

Now, last week the “pinyin pitfalls” I talked about all served some kind of purpose. Separation letters, for example, are there so we don’t get lost in all those vowels!

Pinyin spelling rules for omitting certain letters in finals serve a much less obvious purpose, other than to simplify spellings.

It’s my personal opinion that, rather than simplifying things, these rules actually complicate pinyin and pronunciation.  But hey, it is what it is.

Ever wondered why “you” actually rhymes with “xiu” and “niu?”  That’s because of this rule, combined with the rule about changing “i” to “y.”

Once I made that connection, it was like the heavens opened and my world became a bit clearer.

Also, because of this rule and the rule about changing “u” to “w”, the syllable “wen” is actually the same sound as the final

Is it just me, or do these rules actually make it MORE difficult to know how to pronounce some syllables properly?

Here’s another thing that baffled me for years:

Because of this rule and the previously mentioned rule in Pinyin Pitfalls Part 1 about changing “u” to “w”, the syllable “wei” actually rhymes with such syllables as “hui”, “tui”, and “rui”, even though they are spelled so differently.

Also, this rule and the first rule for omission listed above mean that there are two very similar finals: “ui” and “iu”, which are WAY too easy to confuse! 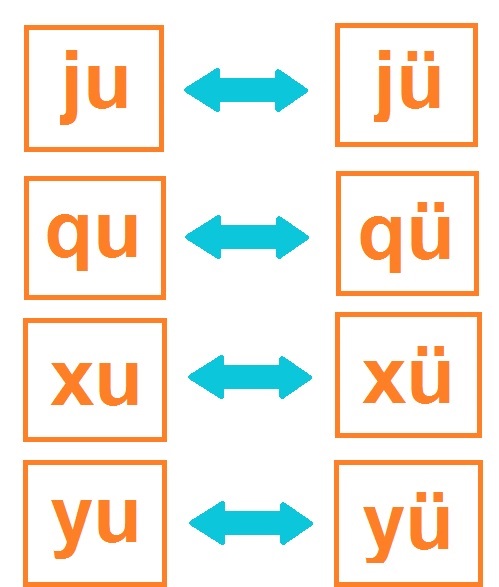 Of all the rules for omission, this one irks me the most.  Why drop the umlaut at all?  I wish I’d had the chance to ask the people who made up these rules.

By dropping those two little dots as well as the “e”, so many of us end up botching the pronunciation of words like “yuan” and “xuan,”  because the distinction between “lu” and “lü” or between “nu” and “nü” is made obvious by the umlaut.

Also, so many of us struggle with pronouncing “xue” as “shui”, and leaving the umlaut above the “u” in “xue” would encourage a stronger distinction between these syllables in our minds.

This spelling rule also states that the umlaut is dropped on the syllable “üen,” and so, combined with the rule for adding a “y” mentioned above, “üen” becomes “yun”.  Totally different from the original spelling! 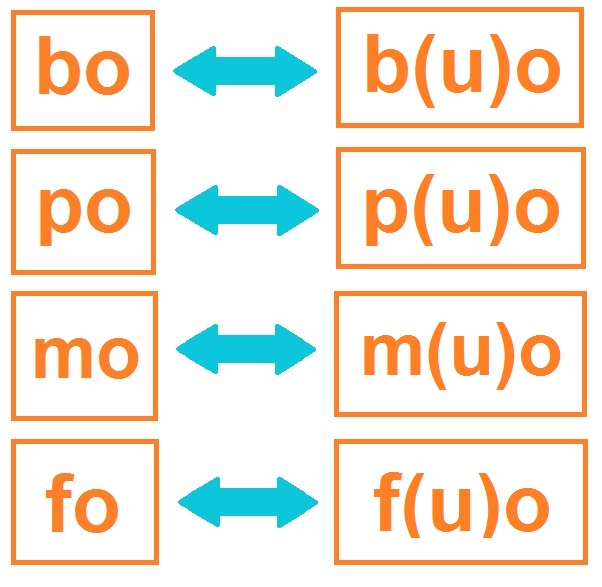 Again, why?  It seems so unnecessarily confusing.

This means that the two syllables in the word “bōluó” (菠萝, which means “pineapple”) rhyme, even though they appear to have different final sounds based on spelling.

What’s a Chinese Language Learner to do?

Okay, I promise to stop ranting and whining.

After all, pinyin wasn’t really created with Chinese language learners like you and me in mind.  Let’s just accept the fact that pinyin has its quirks, and even if it seems unnecessarily complicated at times, it just takes some time to get used to them.

The best thing to do is practice often.  In fact, let’s do a little practice now.  Can you pick out the two syllables below that rhyme ?

Now, can you say these two syllables quickly without thinking about it?

How did you do?

Like I said before, while there are some quirks that we might find annoying, as a whole, I think pinyin is a pretty reasonable and fairly “user-friendly” system.

Once you’re aware of the tricky points, just take the time to master those particular areas, and with some practice, you’ll be confident that you can perfectly pronounce any syllable written in pinyin.

If you're still having trouble understanding how this all works, or if you want some great tips on pronouncing things correctly, Yangyang did a Google Hangout lesson about challenging pinyin pronunciations.

It's extremely helpful, even for someone like me who's been speaking Chinese for years now! So, you should definitely check it out here:

Just in case you didn't see the link to this chart in part one, here it is again: link. The Yoyo Chinese free video-based pinyin chart includes both audio demonstrations for all 400+ Mandarin syllables AND 90+ video explanations of misleading, hard to pronounce pinyin sounds like the ones mentioned above.

If there are any other areas of pinyin that confuse you, I’d love to know what they are. Let me know in the comments section below!
Top 6 Jobs in China for Foreigners Pinyin Pitfalls You Need To Watch Out For (Part 1)