If you’re learning Chinese, you’ve probably come across at least one of the ‘de’s in Chinese - 的 (de)

. “De” can be quite confusing for Chinese language learners, since they sound EXACTLY the same and all have different grammatical functions.


With that in mind, we wanted to set the record straight once and for all! In this three-part blog series, we’ll go over the function of each of these three “de”s, as well as what you can call them specifically, to differentiate each one!

We’ve also created this handy infographic that lays out all three “de”s and their different functions - make sure you save it to your device for easy reference! You can also download it as a pdf here. 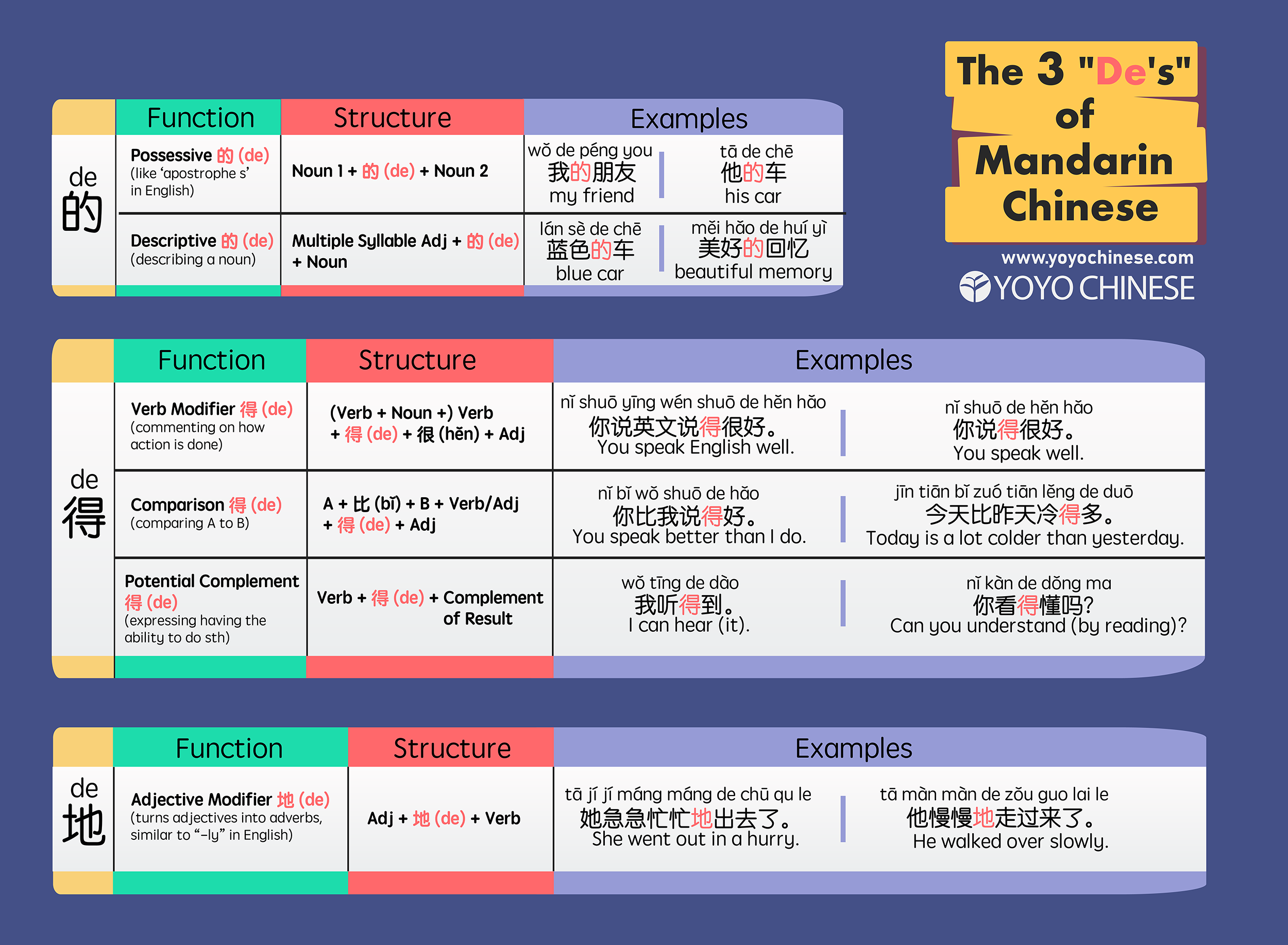 This particular blog post is dedicated to the first “de” - 的 (de) - specifically, so be sure to check out Parts 2 and 3 which will cover 得 (de) and 地 (de) respectively!
* Just starting out learning Chinese? Try out the first 20 lessons of our Beginner Conversational Course for free here.
“De” Number 1: 的 (de)

When learning Mandarin, the first “de” you’re bound to learn is 的 (de)

, which is used ALL the time in Chinese.

, which depicts the “de” by naming the radicals in the character. Do you see it? 的 (de)

This 的 (de) basically indicates possession, similar to “apostrophe s” in English, and is also used to link adjectives to nouns that describe it.

This is the “的” that functions in a similar way to “apostrophe s” or the possessive “of” in English.

Here is the structure:

Let’s check out some examples to see this in action:


If you want to learn more about this 的 (de)

and see examples, check out this lesson from our Beginner Conversational Course.

can be dropped in certain occasions, most commonly when the person has a close relationship to the person.


To learn more about this omission of 的 (de)

, and see it in action, check out this lesson video.

And also, check out this free lesson from our Upper Intermediate Conversational Course to see even more examples of the omission of 的 (de)

, and see some examples of when we can’t drop 的 (de)

is a little more difficult to use, as it’s less straightforward, and not really present in English. Basically, when we want to use an adjective to describe a noun, we will use this 的 (de)

in between, when the ADJECTIVE is more than one syllable.

The structure is as follows:

This is not very intuitive for most English speakers, so let’s check out some examples.


As you can see, what matters is the number of syllables/characters within the ADJECTIVE.

To learn more about this structure, check out our lesson on it here.
Conclusion

! Don’t worry about memorizing all the above rules right away - just keep this blog post as a resource, and the more you see 的 in action, the more intuitive using it will be!


In our second post in this three-post series, we’ll check out the next most-common “de”, and how to use it! Stay tuned!
How to Talk About the Coronavirus in Chinese Chinese Phrase of the Day Challenge: Week 2