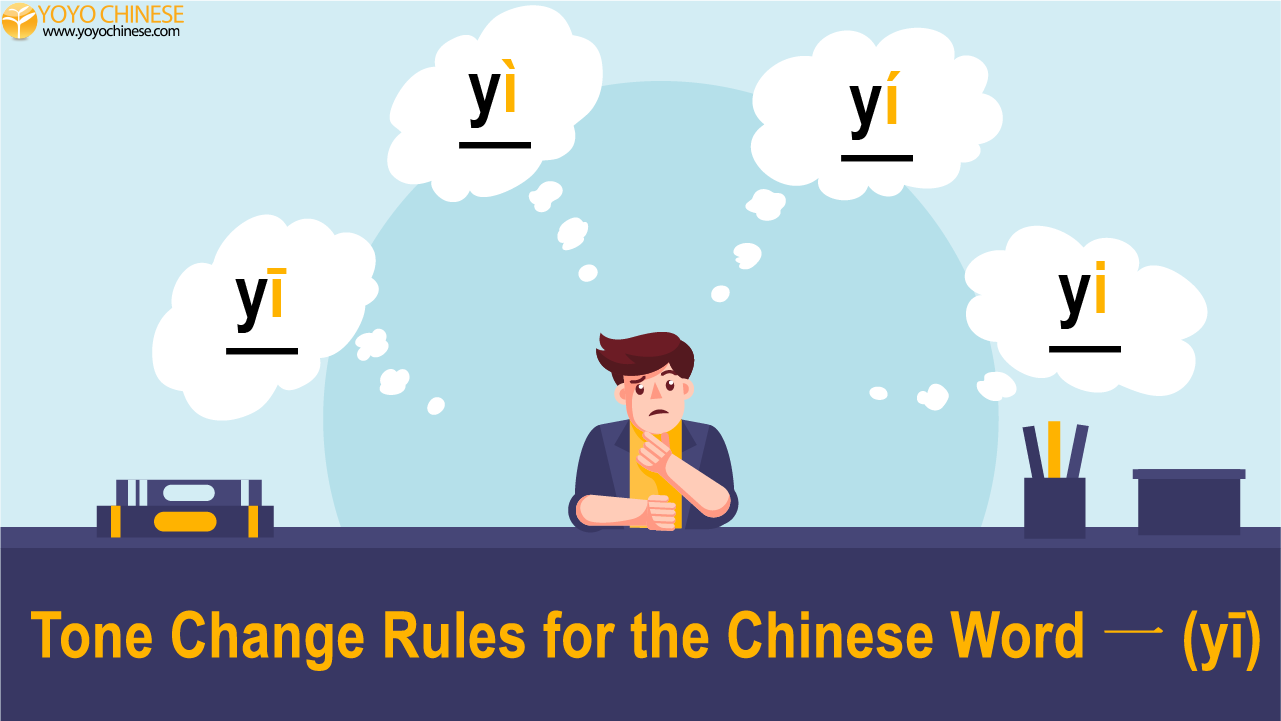 ASHLEY LABRIE | SEPTEMBER 25, 2019
*PLEASE NOTE*: This is the second post in our series on Tone Change Rules. If you haven't already, first check out our post detailing the tone change rules for the character 不 (bù)


When starting to learn Chinese, you should start out by mastering pinyin and the tones so you have a solid foundation for pronunciation.

Trust me, you'll want to focus on this right at the start - it's REALLY hard to go back and try to learn the correct tones after you've acquired a ton of vocabulary!

After learning pinyin and tones, you'll start learning words. One of the first few words you’ll learn in Chinese is 一 (yī)

, the one-stroke Chinese character, meaning... well, “one”. Another one you’ll soon learn is 不 (bù)


Well, as you’ll learn in our Beginner Conversational Course, 一 (yī)

are tone-changing characters that you should pay special attention to.

There are four tones in Chinese, and technically a fifth tone: the first tone (high/flat), the second tone (rising), third tone (low/flat) and fourth tone (falling), and the fifth “neutral” tone (toneless tone).

*** If you're just getting started learning tones, or have struggled with tones in the past, stop right here and watch this live hangout where Yangyang teaches you how to master these tones:

can be pronounced as the first, fourth, second, or neutral tone, depending on its role and what context it’s in.

, so we decided to share these rules in a blog post to set the record straight!
#1: First Tone (yī)

should be pronounced as the first tone:

If it’s the last character in a word, it should also be the first tone:

isn’t the last character of the word/phrase, it’s the fourth tone:

If it’s used with a measure word or a digit of a number ABOVE 99, it’s the fourth tone:

occurs as a digit BELOW 99, that digit is pronounced as the first tone. See how the tones differ between each occurrence of 一  (yī)

in the below examples:

should be the fourth tone, but it’s followed by another fourth tone character, 一 (yī)

changes to the second tone:

isn’t the last character of the word/phrase:

is used with a measure word or a digit of a number ABOVE 99:

can also be pronounced as the neutral tone. The rule is a bit similar to the rule for 不 (bù)

is in the middle of a certain structure or phrase.

is used in between verbs in the structure "Verb + 一 (yi) + Verb", it’ll be pronounced as the neutral tone:

- to take a walk, to walk around

is used in the middle of a verb phrase with a measure word, it can be pronounced as the neutral tone:

in colloquial Chinese. Please note that these tone changes aren’t always noted in written pinyin, so keep this as a guide that you can refer back to as needed!

These changes can be pesky, but don’t stress about sitting down and memorizing them all! Focus on the most common changes, like the 2nd and 4th tone changes for both characters. As a general rule, you can also associate the original first tone for 一 (yī)

is used for mostly number-related language, with the exception of numbers above 99.

Remember, the more you see (and hear) these tone changes in set phrases, the more comfortable you’ll be with using these tones changes when you’re speaking. With more practice listening to and speaking them in action, you’ll even find yourself saying the correct tones with the tone changes just from repetition, without even realizing it or thinking about the rules!

If you're not already studying Mandarin with us, we hope you'll check out our Beginner Conversational Course! You can check out the first 20 lessons for free to see how our program works and decide if you want to take the full course.

You've got nothing to lose, so start now with Lesson 1!

If you're not a beginner, you can also try the first units of our Intermediate and Upper Intermediate conversational courses , or our Chinese character courses for free. See how we can help you take your Chinese to the next level!

Let us know if you have any questions in the comments below!