When you travel abroad, you're ready to experience entirely new cultures and try all of the exotic cuisine and activities.

But some of the most exciting discoveries are the ones that strike close to home. Finding the familiar in the foreign is a great reminder that no matter where you go, people are, at their core, just people.

Language is often the most alienating and isolating cultural barrier, preventing us from communicating and connecting with the world around us. But even in language, there are some cool coincidences.

Many Chinese and English idioms intersect in meaning or even match in phrasing. This all goes to show that even for languages as different as English and Chinese, there are common ideas we all feel the need to express.

Here’s a list of some of our favorite Chinese idioms that have English equivalents. They reveal a lot about the similarities between the two cultures, as well as a few small differences:

1. When hell freezes over / When pigs fly 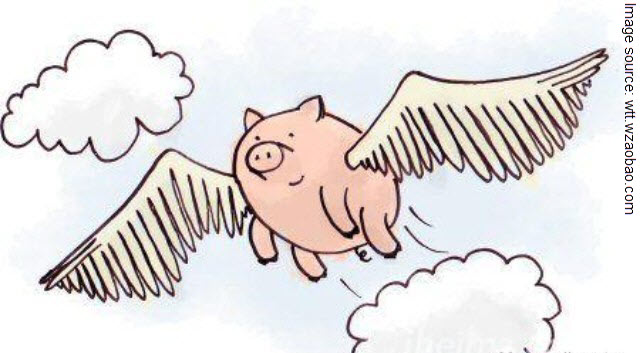 When talking about an event that is impossible, Westerners turn to flights of fancy, and the Chinese to astronomical upheaval.

An additional note: This expression can also be used as a question to express your surprise at an uncommon incident.

Say, for example, your child is awake before noon and has cleaned up the house and made you breakfast. First, you say thank you, and then you ask, “Did the sun rise from the west today?” 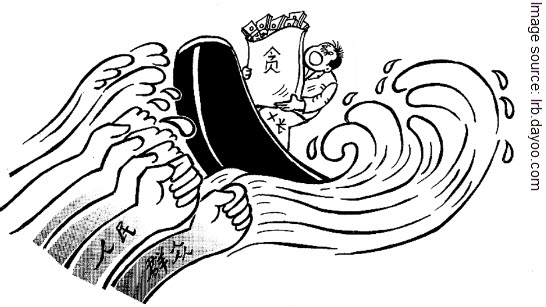 This proverb originated from a Q and A with Confucius.

Originally, it was a reminder that leaders were kept afloat by the populous that supported them. If they were dissatisfied, the same people could easily overthrow the leader.

In the same way, a double-edged sword reminds us that what brings us power can also bring us harm.

These days, both expressions are used more generally to point out how our tools can either help or harm, depending on how we use them.

For example, if your team at work is feeling great because your project is getting a lot of press, just keep in mind that media attention can go both ways.

(Of course, you can also remind the team that “all press is good press.”)

3. An apple a day keeps the doctor away 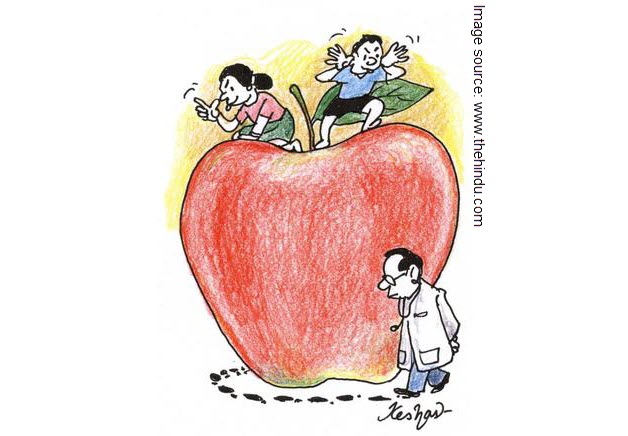 Both cultures focus on nutrition as a way to avoid seeing or bothering the doctor, but the Chinese idiom includes a seasonal caveat as well as a focus on prescriptions and medications—which can be both costly and foul tasting.

This is a good way to remind people to eat more nutritiously and mind their health.

4. Think before you act

Both cultures were smart enough to include this proverb, what with double-edged swords and boats being so tricky.

The term sān sī (三思) means to mull it over or to think again in Chinese, but the plea includes a specific number as the literal definition is “think three times.”

This is a good phrase to use for any friend about to make a big, spontaneous decision, like an elopement in Vegas.

5. Kill two birds with one stone 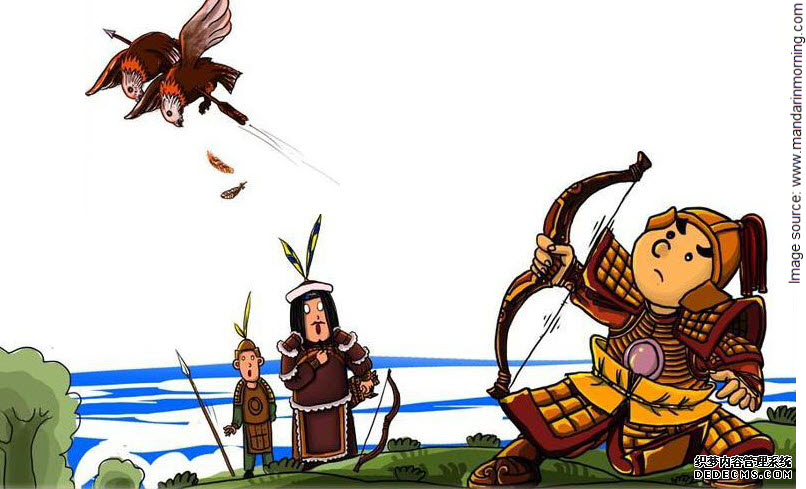 By giving a problem three thoughts, you can often come up with a solution crafty enough to take care of two birds at once.

In this Chinese chéng yŭ (成语), the language is cut down to the barest images. In the alternative saying, the birds are somewhat bigger and the act of shooting an arrow somewhat harder.

Perhaps we can assume that bigger problems must be expressed through bigger fowl?

Then again, some problems aren’t problems at all. As it turns out, they’re really no big deal.

To highlight the insignificance of an action or an event, Westerners might use the term "small potatoes."

In the Chinese version, kitchen scraps like chicken feathers and garlic peels are used. So when someone shows up to your potluck dinner party with a small plate of nothing, you’ll know what to say about this.

Additionally, chicken feathers and garlic peels can be used to discuss any trifling matter or superficial conversation. If you meet an old friend at the dinner party but only have time for small talk, you can say that you only spoke of 鸡毛蒜皮 (jī máo suàn pí) things.

7. Stands head & shoulders above the rest 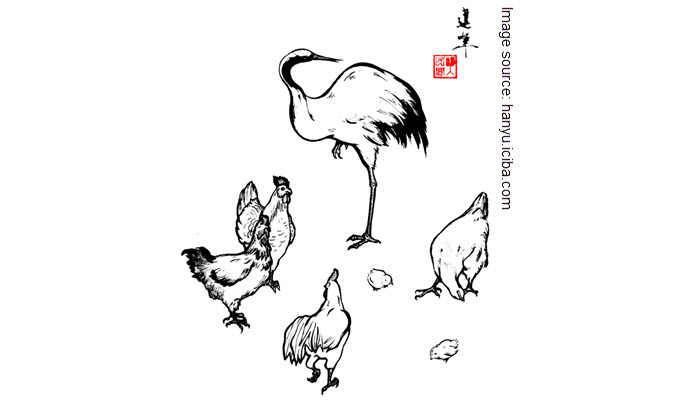 Speaking of those insignificant chickens… they really just can’t compare with a crane.

This expression is used to describe someone who stands out from the rest, such as an excellent job candidate, an impressive artist, or a potential love interest.

Regardless of all the chickens in the world, you’re bound to meet your crane one day. Just be careful not to get swept away, as both English and Chinese speakers recognize the dangers of infatuation when you fall in love at first sight.

9. Do unto others as you would have done to yourself 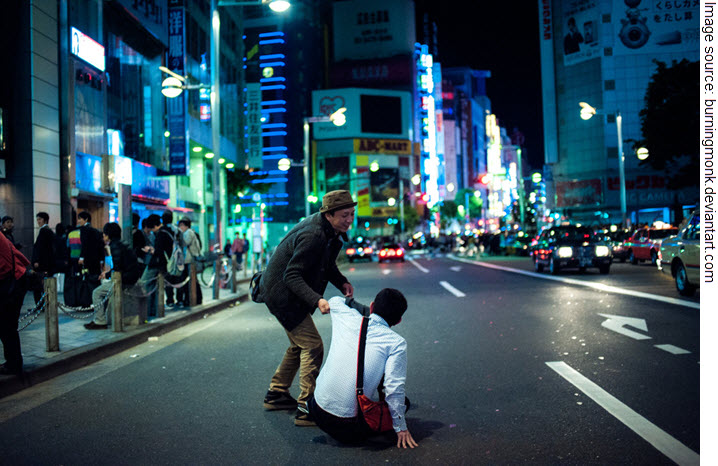 Here’s a much deeper kind of love to focus on. It may not be romantic love, but both cultures celebrate the importance of the Golden Rule.

Interestingly enough, the origin for this phrase in Chinese also comes from a translation of the Bible.

Its usage today, however, does not necessarily have religious ties. You can feel at ease using it to tell off any bully. 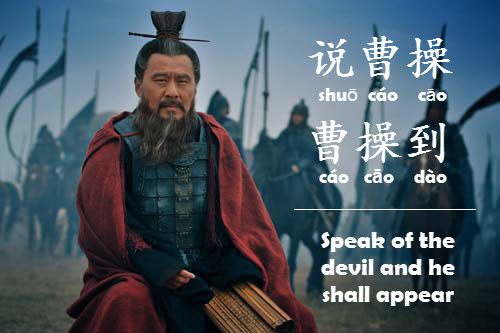 While ghosts and demons abound in Buddhist tradition and Chinese superstition, cáo cāo (曹操) was the historical figure chosen to represent the devil in this idiom.

A warlord during the Three Kingdoms period, cáo cāo (曹操) has been praised as a brilliant strategist and fair ruler, but Chinese opera also represented him as cunning and deceitful. This portrayal carried on into the literary epic, Romance of the Three Kingdoms.

This idiom arose out of the belief that cáo cāo (曹操) had many eyes and ears everywhere, and moved with unbelievable speed. You had to be careful when speaking ill about him.

Anytime you are enjoying some gossip and suddenly the subject of your conversation texts, calls, or announces her presence, you can verbalize this coincidence by saying, "shuō cáo cāo, cáo cāo dào (说曹操，曹操到)!"

It's also interesting to note that the second half of the idiom is often omitted in English. Usually, you'll often hear people say, "Speak of the devil."

In Chinese, no one will ever say "shuō cáo cāo (说曹操)" and leave it at that. Don't omit the second half of it like you would in English.

Have you had reason to use one of these idioms lately? Which one best applies to your situation? Do you know of any other idioms we should add to this list? Please share in the comments below! 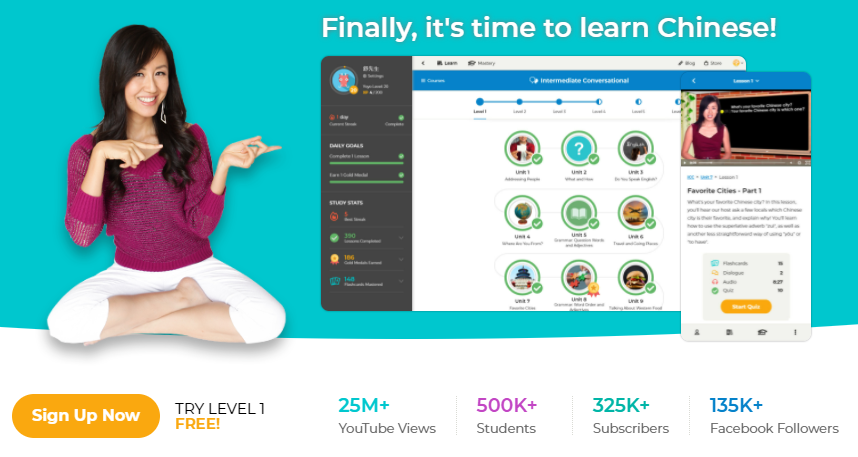