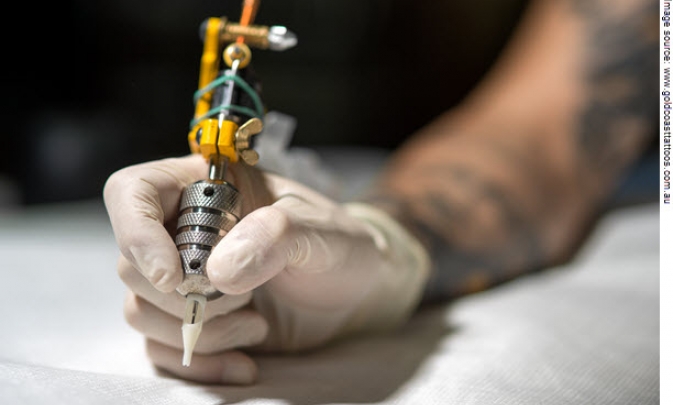 We all know they’re cliché, but people keep getting them: Chinese (or Japanese) character tattoos.

I get it though, I really do. You have an idea or concept that you really love and you want it memorialized forever. But you can’t depict it graphically, so you go for the halfway choice: using a logographic language like Chinese.

The trouble is that you can never quite be sure what you're getting when you choose a tattoo with Chinese characters. Unless you’re really familiar with the language.

Using Google Translate or asking your friend who took Chinese in college 8 years ago usually isn’t enough due diligence.

Sadly (hilariously?) I’ve seen my share of atrocious, poorly-researched Chinese tattoos. So I’m going to share some of my favorites.

Oh, and to answer your question ahead of time, no, Chinese people don’t generally walk around with nonsensical English tattoos.

They save that for their t-shirts: 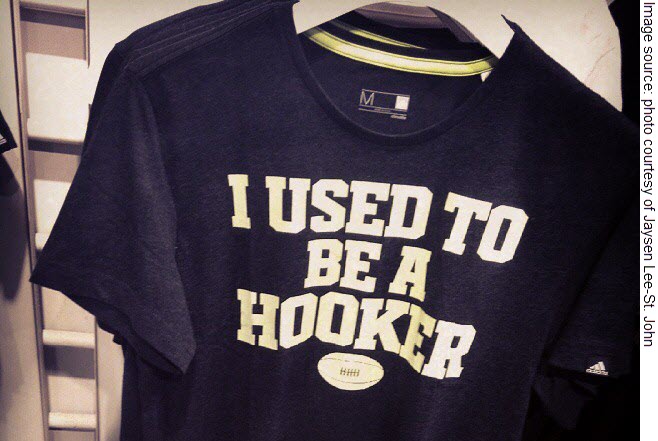 Intended meaning of the tattoo: free (of mind and spirit)

REAL meaning of the tattoo: free (of charge) 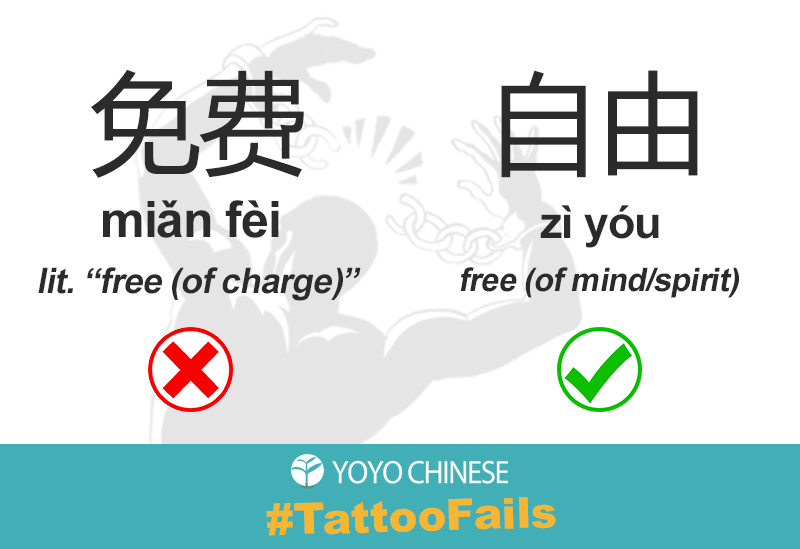 I encountered this one on a trip back to the US soon after I started seriously studying Chinese, so it was pretty fun to be able to point out the error.

I was in The Mall in downtown Washington DC and saw a girl with a tattoo on her leg reading miǎn fèi (免费).

I asked her what it meant and she said, “Free, like freedom,” and I painfully had to point out that while miǎn fèi (免费) does mean “free”, it refers to goods or services offered without charge, as in “free WiFi.”

fèi (费), in this context, means fee or expense, while miǎn (免) is a negation term basically meaning “no” or “non-”, as in bǎ (so-and-so) miǎn guān le (把 (so-and-so) 免官了) , meaning to be removed from an official position.

Intended meaning of the tattoo: “power”

REAL meaning of the tattoo: “electricity” 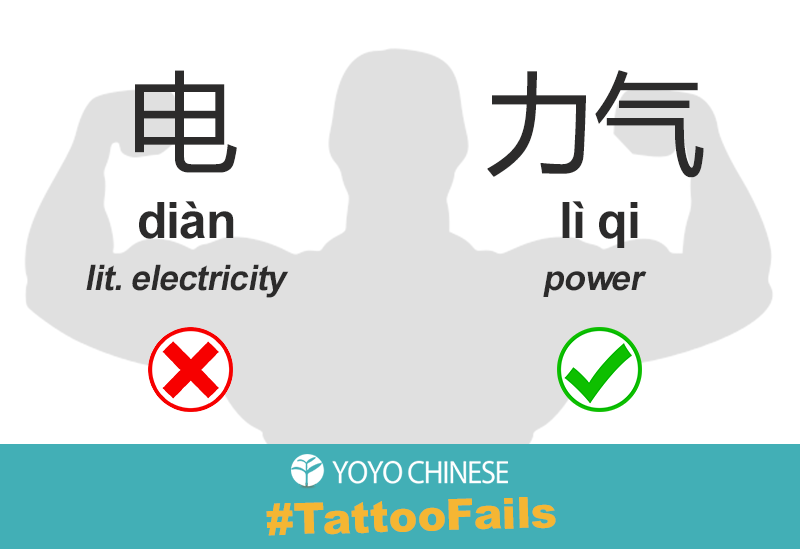 No excuse for this one, as it’s actually a pretty simple pictographic character - it looks pretty much like an electronic device with a power cable coming out of it, look: 电!

A guy at the gym in my mom’s apartment building had this one on his arm, and I dared not say anything about it because he was about twice my size.

But I did ask him what it meant and he told me it was Korean (seriously, man?) for “power.”

diàn (电) is occasionally used in the way we might use “power” in English, though. For instance when a phone is out of battery power, you might say: shǒu jī méi diàn le (手机没电了)

Definitely not what this dude was going for.

The guy was pretty enormous, to be fair.

REAL meaning of the tattoo: no meaning. Literally “husband + hand”

No one really knows what’s going on with this tatt, famously inked on former FC Barcelona star Francesco Coco.

(aka kung fu), and shǒu (手) was being used to refer a person practiced at a certain skill, for instance a gǔ shǒu (鼓手)

Anyway, it came out complete gibberish, as fū (夫) on its own just means "male" or "husband".

I’ll revel in pointing out the irony, by the way, of a soccer player celebrating his hands, mannish as they may be.

for kungfu master or something?

I don’t know. Italians are a hard people to read.

Intended meaning of the tattoo: “family”

REAL meaning of the tattoo: “household” 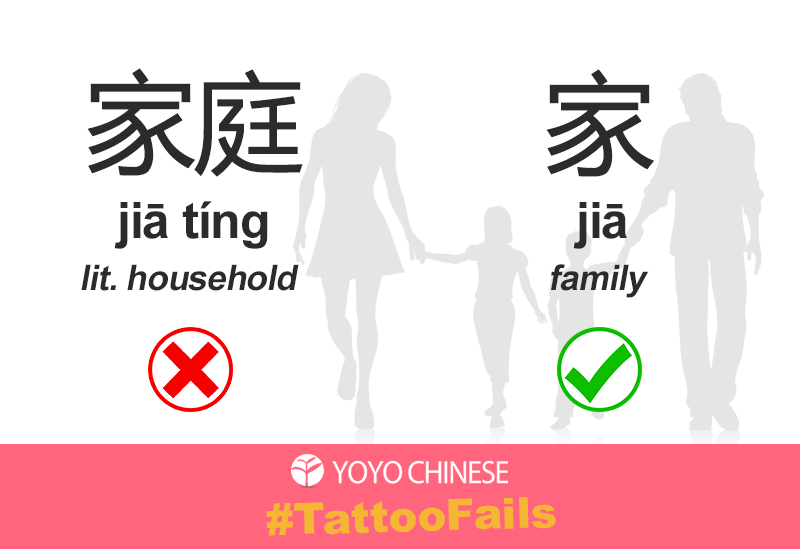 This one isn’t especially awful, but I was in the Philippines last month and I saw a guy with a jiā tíng (家庭) tattoo.

Clearly he'd meant to get something representing family and home, which is technically what jiā tíng (家庭) means.

But it’s the usage that counts here: jiā tíng (家庭) is more of a formal term for household or family, often used in statistical data, news reports, and the like.

It certainly can be used to represent family as a concept, but simply jiā (家) would do a better job communicating the idea he was going for.

Should’ve gone with: a simple jiā (家) would have sufficed.

Intended meaning of the tattoo: “spirit”

REAL meaning of the tattoo: “ghost” or “demon”

A friend told me about this one. A coworker of hers in the US had recently lost her grandmother and wanted to commemorate her with a tattoo.

For reasons unknown, she chose to get one of the Chinese character guǐ (鬼), having been told it means “spirit,” in the religious and, well, spiritual sense.

While that’s not all that far off, guǐ (鬼) actually refers to the more negative aspects of the afterlife. It's a component in lots of words that refer to ghosts, demons, devils, and the like.

Perhaps the most famous is the archaic yáng guǐ zi (洋鬼子)

, or “foreign devil,” which I got called once by a very old Shanghainese man after I cut him off while riding my bike.

(I told my American boss about it afterwards and he remarked, “Was the guy yelling at you from the year 1933?”)

In any event, guǐ (鬼) is definitely not tattoo material.

- a much gentler and more appropriate way to refer to afterlife entities.

As your Chinese improves you’ll notice more and more of these poorly-thought-out tattoos.

My advice: if you want some Chinese character ink, Google it thoroughly and, most importantly, ask a bunch of actual Chinese people.

I got this tattoo a few months ago (pictured below) to commemorate my time in China (my zodiac animal is the ox, if you were wondering), using the Chinese idiom “bǎi zhé bù náo (百折不挠),”

- “to be undaunted by repeated setbacks.” 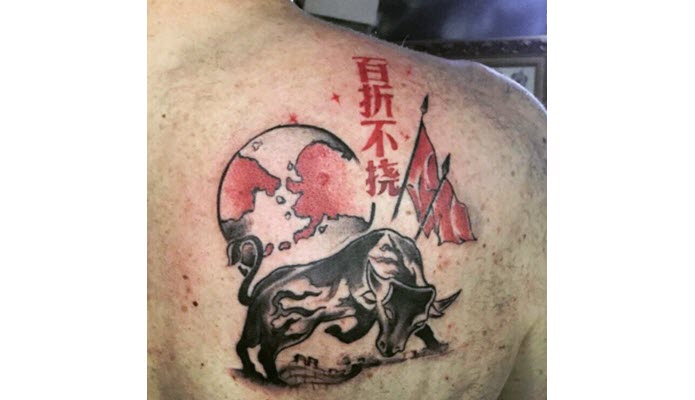 expert by any means, and while I knew what the phrase meant, I made the mistake of not checking with educated native speakers to get an idea of the cultural context and connotation of the phrase.

We’d love to hear about some of the crazy/dumb/funny Chinese tattoos you’ve seen! Let us know in the comments below.