Do you ever feel like you over-complicate things when you’re speaking Chinese?

This idea first dawned on me one day when I was watching Chinese TV and a celebrity was being interviewed about his recent concert.

One thing he told the interviewer about his concert stood out to me. He said, simply: 人很多 (rén hěn duō).

The simplicity of that statement struck me, especially when I translated it into English in my head.

I realized that if I wanted to say, “There were a lot of people,” in Chinese, I probably would’ve said something much more clunky sounding. It wouldn’t have occurred to me to simply say "人很多 (rén hěn duō)"

because I’d never say, “People were many” in English.

But this simple and right-to-the-point way of structuring a sentence is really common in Chinese. It’s an example of what’s called a Topic-Comment sentence.

What is the Topic-Comment structure?

The topic-comment structure (which I’ll call T-C structure) is another useful way to arrange a sentence in Chinese.

In the sentence 人很多 (rén hěn duō), 人 (rén) – “people” is the topic, because that’s what the sentence is about. 很多 (hěn duō) - "many" is the comment because it describes something about the topic. 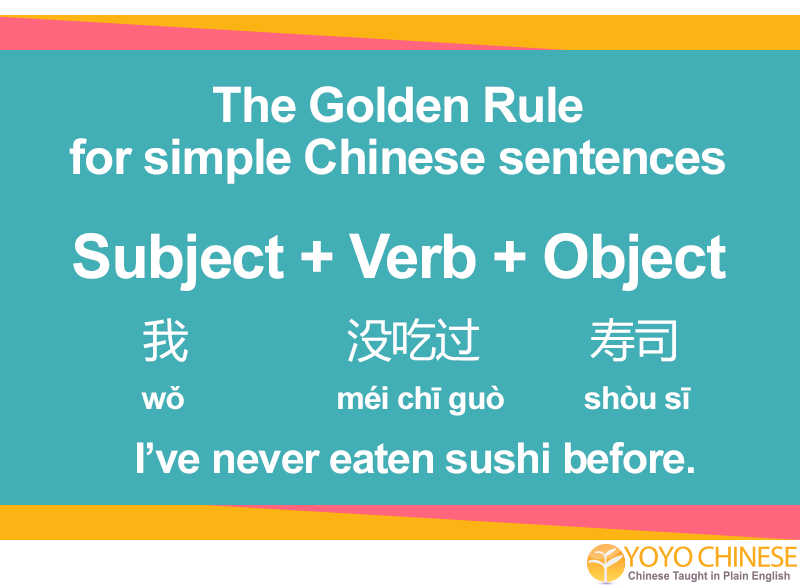 The Topic-Comment structure differs from the Golden Rule sentence order that we often talk about in our lessons.

For example, following the Golden Rule, the object of a sentence goes after the verb. But in a T-C sentence, often the object is the topic of the sentence, so it goes first.

In this sentence, 寿司  (shòu sī)

- sushi is the object and the topic:

Note: 我 (wǒ) is in parenthesis here because the subject of a sentence like this is often omitted. 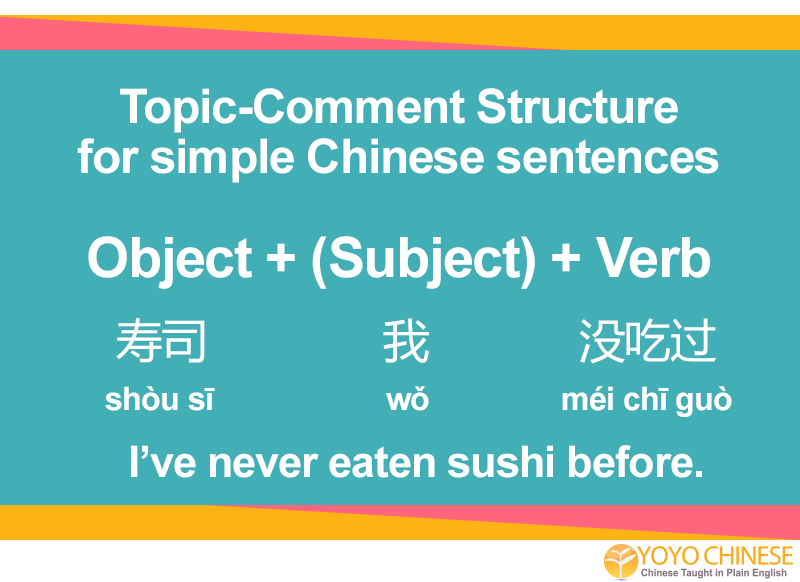 The T-C structure is often used in sentences like this to express emphasis, especially when comparing or contrasting.

The speaker in this instance might be trying to say, for example, “Sushi, I’ve never had, but sashimi I’ve eaten many times.” (See how we sometimes use this type of sentence structure to express emphasis in English too?)

But the T-C structure doesn’t necessarily have to be used for emphasis or contrast, like the following example:

Sentence: He’s really picky when looking for a wife/girlfriend.

If we want to try to retain more of the topic-comment feel of the sentence in English, we might also translate it as, “When it comes to finding a wife, he’s really picky.”

In sentences like this, the T-C structure is just another way to organize information in a sentence.


Review the Golden Rule of Chinese for simple and complex sentences:


Should I use the T-C structure when I speak Chinese?

I think English speakers tend to under-utilize the T-C structure, and there are two reasons why:

First, we often aren’t taught this sentence structure until relatively late in our Chinese learning. We usually learn the Golden Rule first. (That’s okay. You have to start somewhere, right?)

The second reason is that the Golden Rule word order is similar to normal English word order, so we feel more comfortable using it.

T-C structure doesn’t feel natural. But in Chinese, the T-C structure is sometimes the most natural sounding way to express an idea in casual conversation, so you should definitely get used to using it.

How can I get started?

Like anything else when it comes to learning a new language, it’s just a matter of practice. The more you use it, the more comfortable you’ll feel. I suggest that you start with the following three types of sentences:

Try to get used to saying “(something) very many” or “(something) not many,” like in these examples. The topic is in red, and everything that follows the topic is the comment.

There are/were a lot of people.

She talks a lot.  or  She can say a lot. (This is often used to describe young kids.)

There’s not much time left.  or  We don’t have a lot of time.

If you directly translate sentences like these from English into Chinese, often there is nothing grammatically wrong with them.

to mean, “There’s still a lot of rice left.”

Using the T-C structure is not mandatory in order to form correct sentences. But in many cases, like the examples above, it does sound more natural to use the more simple, direct T-C structure. 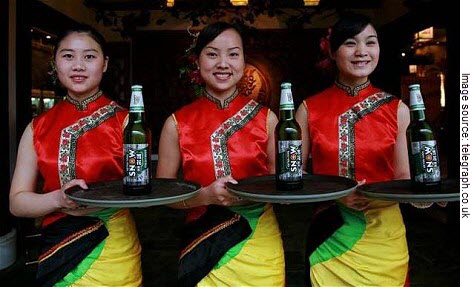 You often hear the T-C structure used in questions too. Instead of always relying on the "你有没有 (nǐ yǒu méi yǒu)"

structure, try this instead:

Do you have a bag?

You hear and use this question a lot when shopping in China since there is an additional fee for most plastic bags.

And speaking of shopping, here’s another question that you often hear from cashiers and shopkeepers as they make change for you:

Do you have two yuan?

You can also use the T-C structure when you order in a restaurant. For example, remember that beverages aren’t always served cold in China, so it’s good to clarify if they have any chilled drinks as you’re ordering. You can say it like this:

3.   When you want to ask, “Is something ready/finished/completed?” 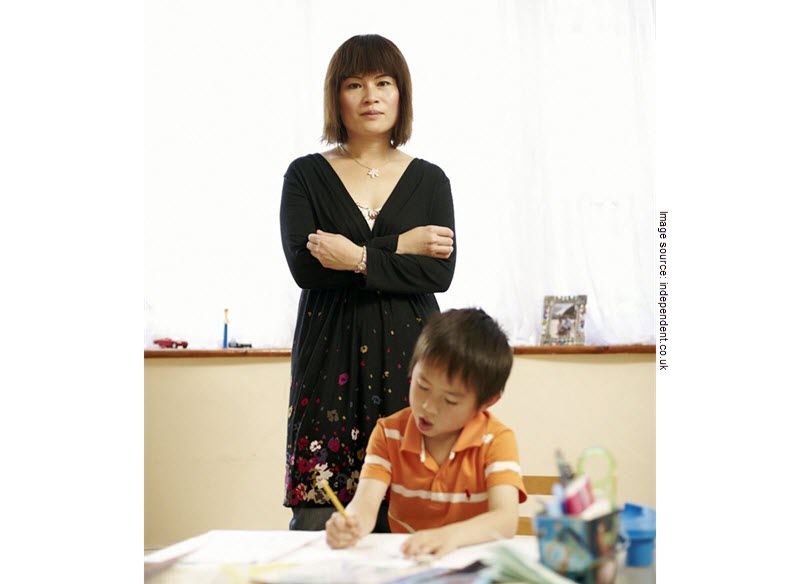 I think you’ll like the simplicity of how these types of questions can be asked in Chinese. Check out the below examples:

Is the food ready?

Have the plane tickets been bought?  or  Did you buy the tickets?

By the way, if this is the first time you’re seeing 完 (wán)

used in this manner, we give you the details of these complements of result in the Unit 11, Lesson 2 of our Intermediate Conversational Course: 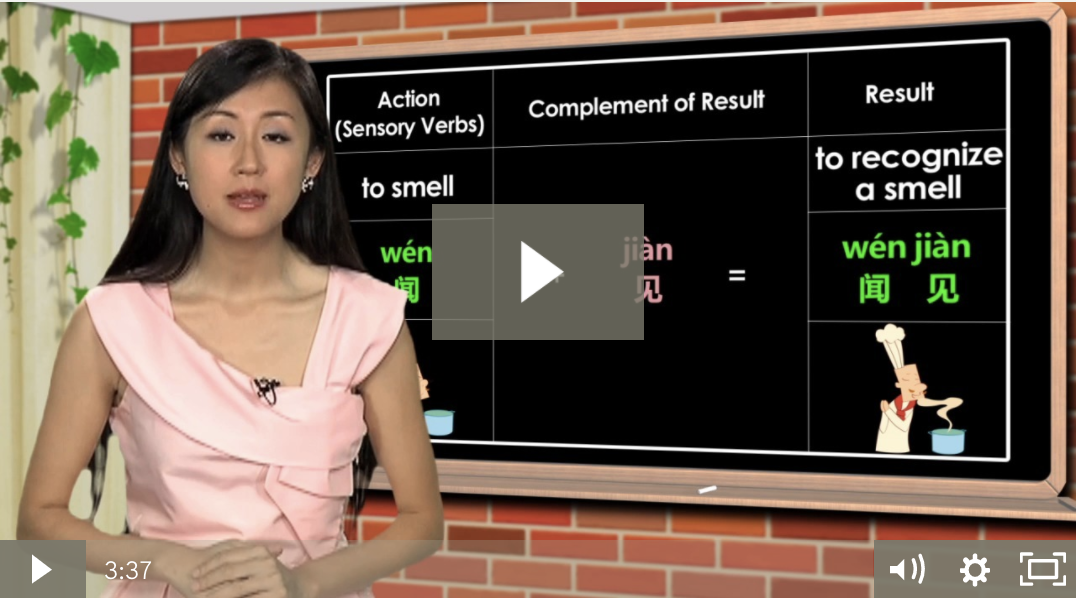 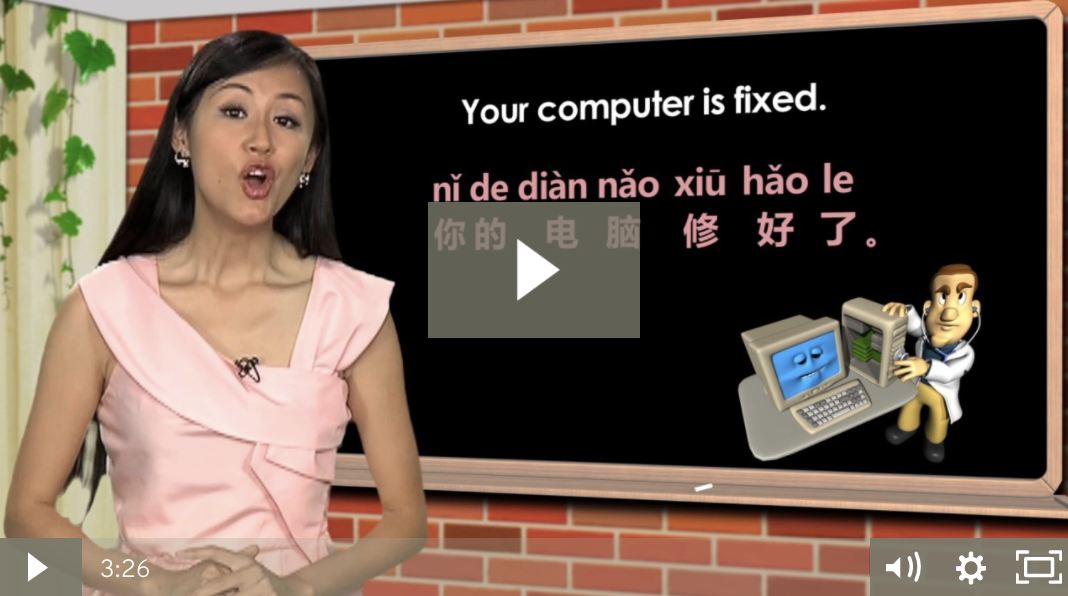 Two challenges for you 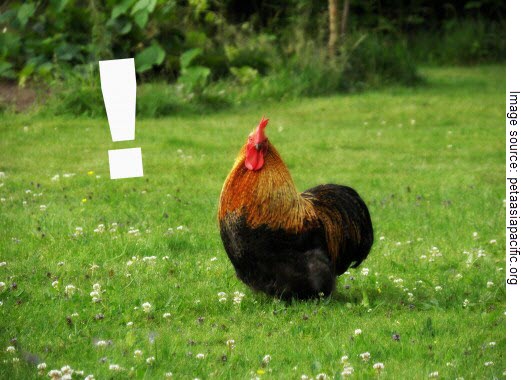 The main thing that prevents us from using sentences like this—and instead using something that sounds a bit clunky—is our tendency to translate from English into Chinese.

I challenge you to keep in mind sentence structures like the examples provided so you can speak more natural-sounding Chinese.

Your second challenge is a favorite of Chinese linguists. They love the following sentence because it has two potential meanings depending on whether it is interpreted as a Golden Rule sentence or a T-C structure sentence:

Do you know the two possible meanings of the sentence? Think about it and leave your answer in the comments section!