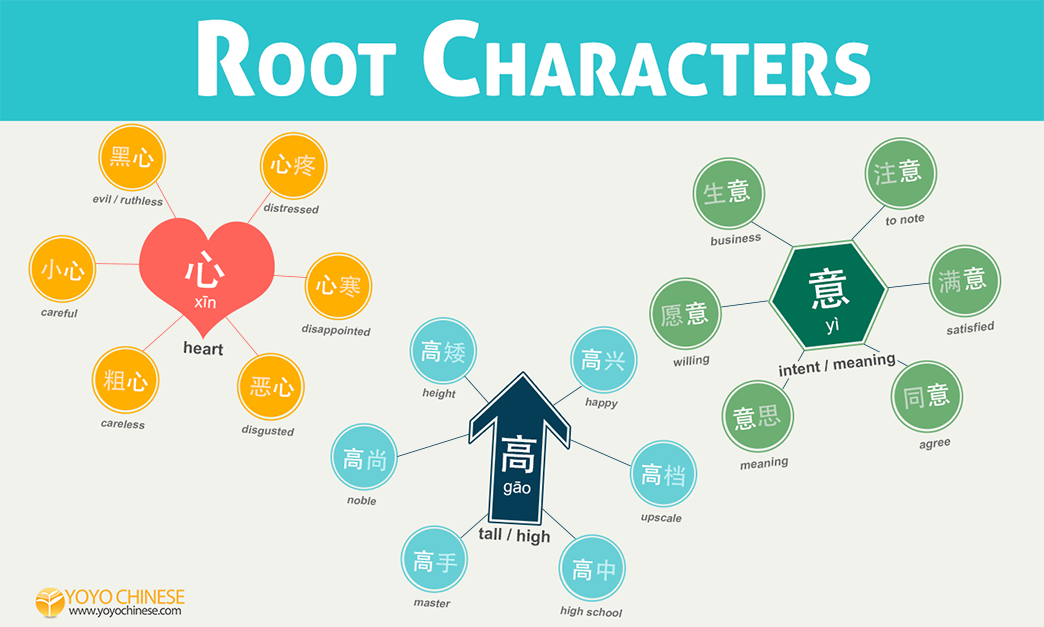 How to Read Chinese Compound Words by Understanding Root Characters

Learning to read Chinese seems really hard. Opening up a book and trying to read, it it might seem like you need to memorize thousands of strange looking characters, and that's enough to suck the confidence and motivation from most Chinese-learners.

Allow me to introduce you to the magic of root characters!

The Magic of Root Characters

What this tells us is two things:

1. Once you learn one of these root characters, you will start to notice them everywhere, in the large web of compound words that they are part of.

There are good reasons why learning Chinese characters is actually a lot easier than most people think.  For one, the majority of spoken Chinese uses only a small fraction of characters.  Only 100 characters make up 42% of conversational language, and and by 300 characters you can up to 64% of the Chinese you'd find used in spoken and written Chinese: 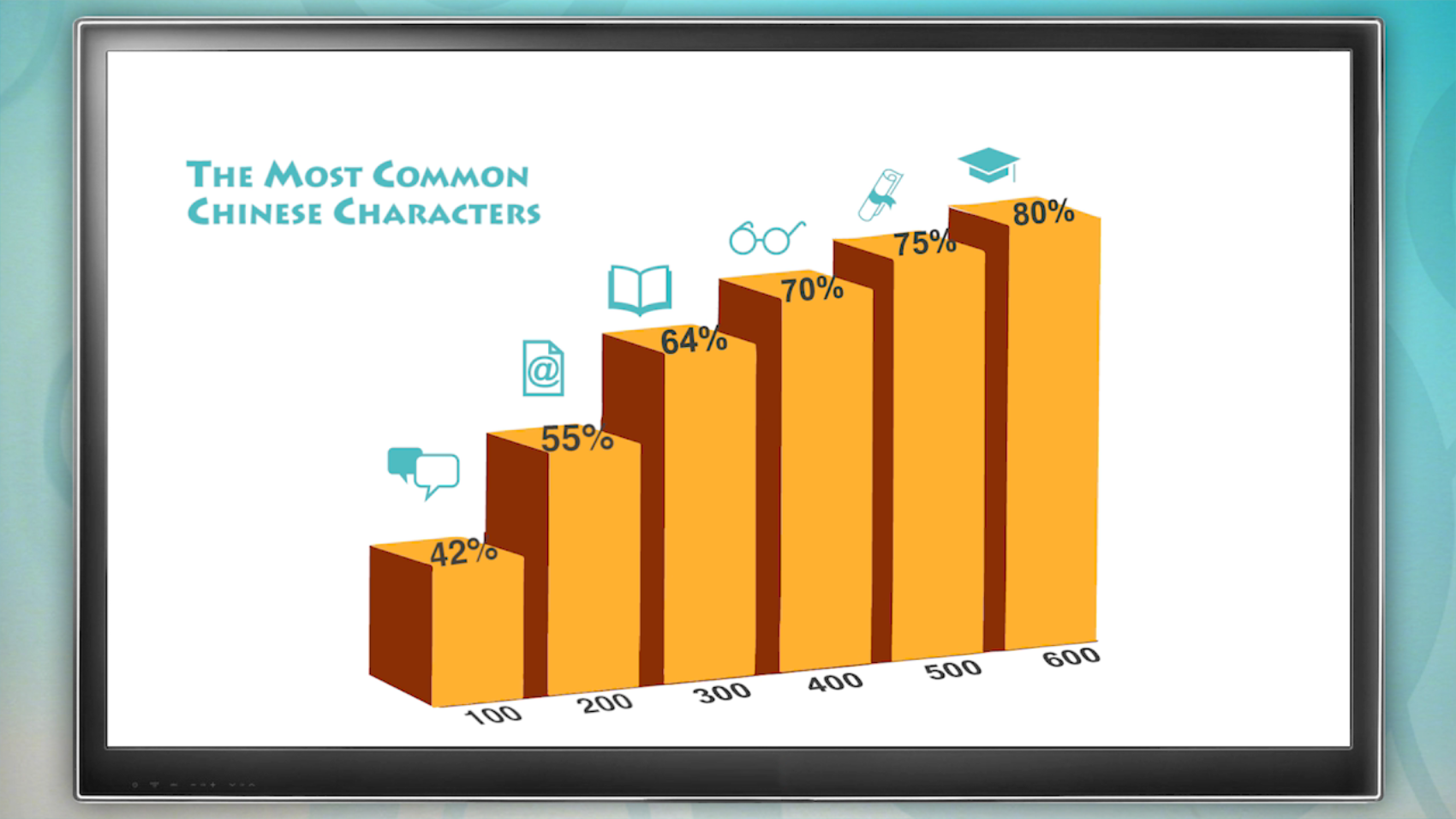 In the Yoyo 300 Chinese Character Course (which, as the name implies, teaches you the most common 300 characters), Yangyang goes into more detail about just how many characters you should learn, and shows you how root characters are building blocks for putting together thousands of words.  Check it out:

Now that you see how individuals characters are made up of components that are used in different configurations, the idea of"root characters" might be starting to make more sense.  By mastering the most common 300 characters, you're actually unlocking 1313 HSK words with the combinations that form compound words.

Once you get the hang of identifying root characters and their use in compound words, you will begin to see the logic. You might even begin to see the poetic side of the Chinese language. For example, did you know that “caution” - 小心 (xiǎo xīn)

, literally “coarse heart,” is a more tactile and colorful way of thinking about the concept of being careless.

Let's look at three popular root characters and demonstrate the wide array of words they help form, and how they lend their meaning to webs of compound words. 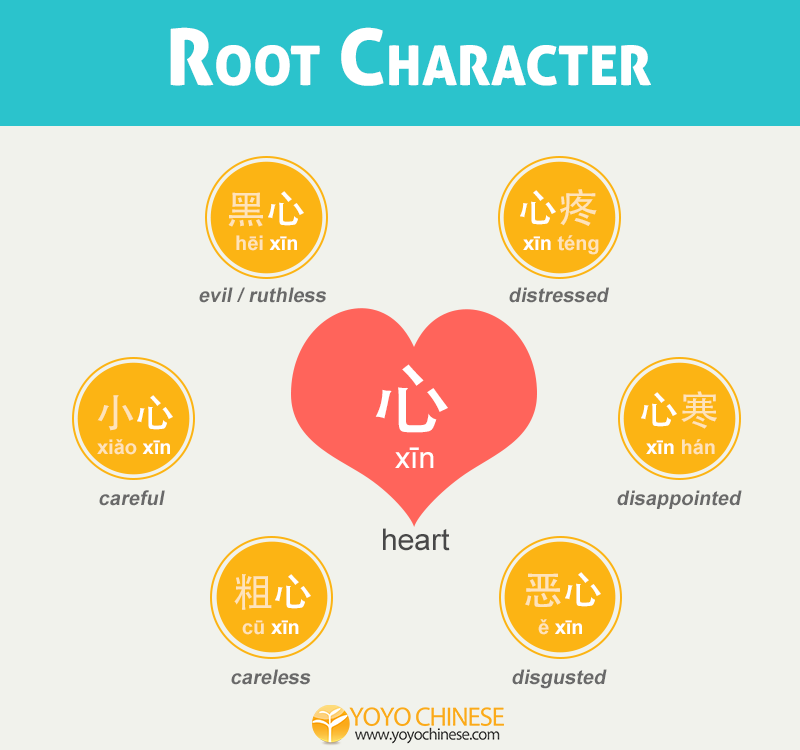 In ancient China, the heart was thought of not only as the organ that controls the circulatory system, but also as the source of consciousness and where feelings and thoughts are harbored. Therefore, “心 (xīn)”

became a crucial root character for compound words that have to do with describing one’s nature, thoughts, and feelings.

When you are feeling sorry about someone or something you love, you might involuntarily clutch your chest even though your heart might not literally hurt.

literally means “freezing.” This describes when someone feels extremely disappointed, and it feels like a chill has washed through the whole body.

Literally, this word breaks down to “bad heart,” and refers to the feeling when you loathe something to the max. This compound word has been adapted to refer to the physical sensation of nausea as well.

This literally breaks down to “coarse/rough heart.” A rough person is most likely not a stickler for details.

This literally breaks down to “black heart,” which is similar to the English equivalent of “black-hearted.” In recent years, the term “黑心食品 (hēi xīn shí pǐn)”

has been used to describe the adulterated, polluted, and fake foods that have become a big problem in China. 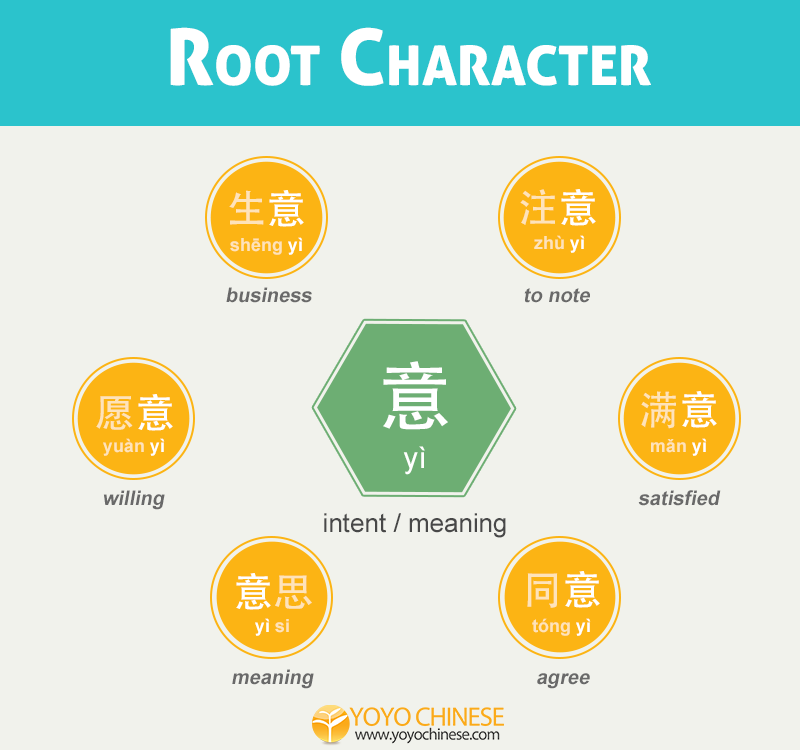 is a word with many different meanings. In addition to “intent” and “meaning,” 意

- to note, to pay attention

Literally, this compound word breaks down to 注(zhù)

– intention. To focus your intention on something is to notice or pay attention to it.

To have your wishes fulfilled leads to satisfaction.

means “same.” To have the same intent is to agree.

In addition to the definition “meaning,” 意思 (yì si)

could also mean “fun,” and “interest.”

implies that you are willing, and this is what you want. The other translation of “willing” is 肯 (kěn)

carries with it an underlying connotation of reluctance.

means “to live.” This compound word roughly translates to “to make a living.” 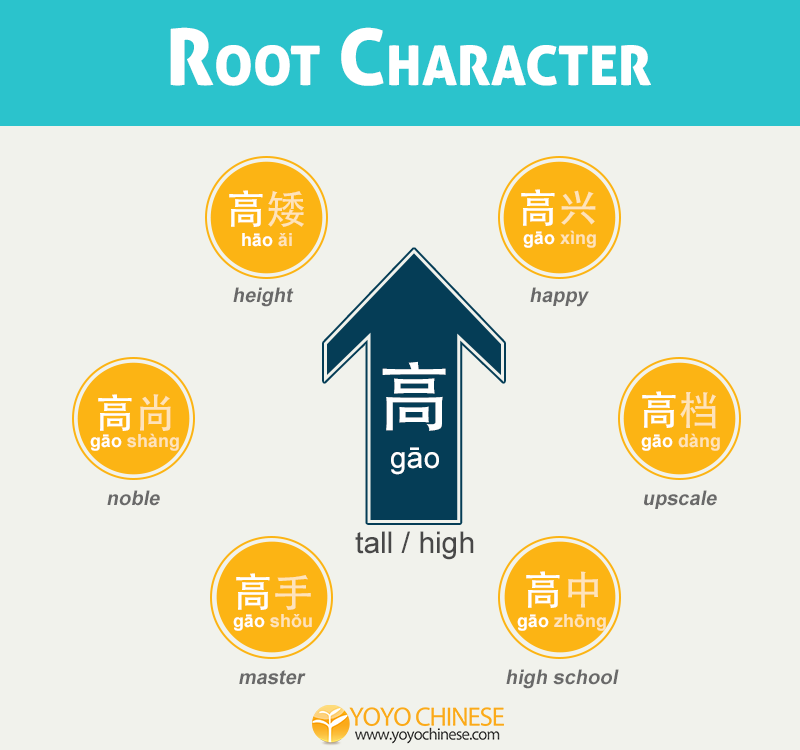 could mean physically "tall" or "high," many of its uses connote an abstract higher level, or higher status.

translates to “mood” here. To have a “high” mood means to feel like you are on top of the world, and happy. In modern Chinese slang, the English word “high” is often use to mean “have a good time,” which is unrelated to the connotation that “high” has in English slang of drug use.  Note that in this use of Chinese slang, they actually leave in the English word “high.”

means “Let’s have a good time together!"

literally means “file,” but can be taken here to mean “level.” To be in a higher level is to be of superior quality, and therefore more upscale.

, both are quite literal: 小 (xiǎo)

– middle. But for some reason, high school is called 高中 (gāo zhōng)

means “high hand,” implying someone who has mastered a craft at a high level.

describes someone with a high moral quality.

– “short.” The tall and short of something is its height.

There you have it, a breakdown of how three popular root characters contribute to the formation of useful, everyday compound words. Do these look familiar to you? Feel free to ask us any questions in the comments section below!