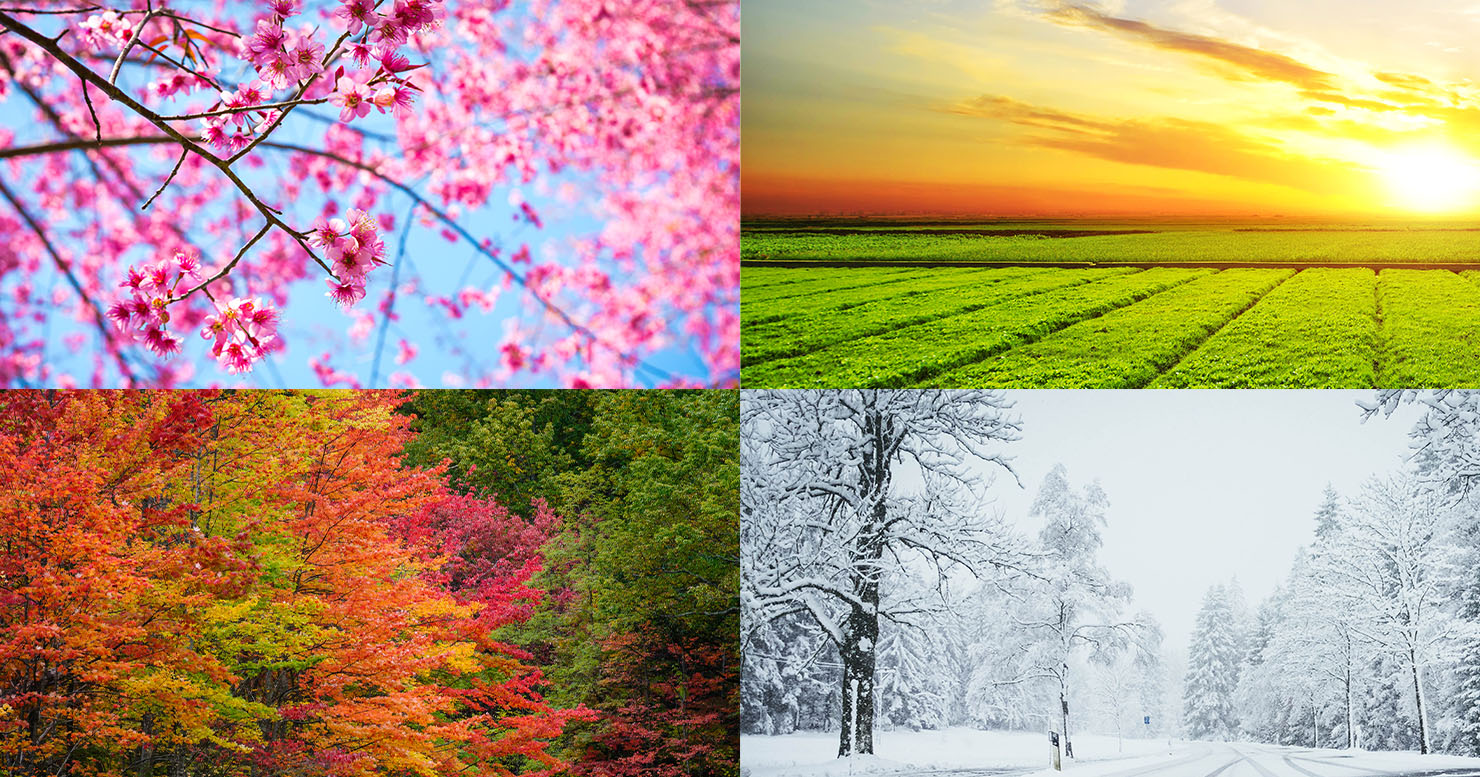 The fourteen years since the 2008 Olympics were held in Beijing have passed in the twinkling of an eye, but I bet many of you still have a deep impression left from that opening ceremony; and the Winter Olympics held by China in 2022 is an excellent opportunity for Chinese language learners to better understand Chinese culture as well.

In the opening ceremony of these Winter Olympics, the director used the modern technology of light & shadow to provide a world class presentation of China's intangible heritage: 24节气 (èr shí sì jié qì)

- the 24 solar terms. The 24 solar terms play a very important role in Chinese culture, as they show how the Chinese people used the calendar to manage the relationship between people and nature. They also make a strong association between the change of seasons and agricultural production, diet, philosophy on health, and folk culture.

Learning and understanding the 24 solar terms can be said to be fundamental to really knowing the Chinese culture, lifestyle, and way of thinking.

You may have noticed that the English name "24 Solar Terms" doesn't quite match up to the Chinese name for them. 24节气 (èr shí sì jié qì)

could be more literally translated as "the 24 periods of weather," and were first established by the Chinese people to keep track of the changes of seasonal weather and manage the relationship between people and nature. They originally didn't base them off of the sun, but instead according to the clockwise rotation of the Big Dipper's handle in the night sky, since each full rotation of the handle marked the passing of a year.

Each year has four seasons, and each season has three months and thereby six different solar terms. These solar terms were closely bound with the lives and farming of the Chinese people. The spring season consists of the following six solar terms:

From these six solar terms, we'll introduce a few of them that hold the most cultural meaning.

- Beginning of Spring. In our article Western New Year vs. Chinese New Year we talked a bit about the history of Chinese New Year. Chinese people celebrate the coming of the new year on the first day of 立春 (lì chūn),

which is where it gets it's other name: 春节 (chūn jié)

- Spring Festival. There's a saying in Chinese that goes:

It's used to express the sentiment that one should start planning for the new year in spring. This shows how important the idea of spring is to the people of China. Even though at this time of year the regions of Northern China are still experiencing temperatures that are quite low, regions in Southern China have already started to warm up. 立春 (lì chūn)

is the start of a new year, and on this day Chinese people have the custom of eating 春饼 (chūn bǐng)

- Spring Equinox, is the fourth solar term of the year. On this day, the day and night are of equal length throughout the world; and China lies above the equator so this means that Spring has truly arrived. The most popular activity on this day is 立蛋 (lì dàn)

- standing eggs upright. This is a custom that's not just followed in China, but has also become a challenge that's enjoyed by many people around the world. Besides 立蛋 (lì dàn),

also opens the curtains for activities like 踏青 (tà qīng)

- traveling. In Chinese culture, if it rains on the Spring Equinox, it indicates that the crops will bring forth a good harvest that year. 春雨贵如油 (chūn yǔ guì rú yóu)

is a line that almost every Chinese person is familiar with, and it means "spring rain is as precious as oil."

the weather begins to clear up. Since 清明 (qīng míng)

- Qingming Festival / Tomb Sweeping Day - is set for April 5. On this day, the most important activity is to pay respects to the graves of one's ancestors.

also marks the beginning of summer. After this day, the rain gradually increases, and the weather is ideal for the growth of crops. In ancient times, Chinese people gave great importance to 立夏 (lì xià)

and even had a special ceremony called 迎夏 (yíng xià)

- welcoming of the summer.

Among the summer solar terms, another important one is 夏至 (xià zhì)

- Summer Solstice. It marks when the day is the longest and the night is the shortest in the Northern Hemisphere. Chinese people have the sayings:

After you've eaten the Summer Solstice noodles, the day is shorter by one line.

Eat dumplings in winter and noodles at Summer Solstice.

Have you noticed that each of these solar terms that we've introduced so far seem to have a significant relationship with food? It's sometimes said that Eastern culture is a food culture, and these solar term customs only further confirm this idea!

It's used to describe when someone is training very hard and without ceasing for a new skill, even through the coldest time of winter and the hottest time of summer. Here 伏 (fú)

refers to when the darkness feels the pressure of the light until it must hide beneath the ground. So it has the meaning of 埋伏 (mái fu)

- to lie low, because this period brings the hottest temperatures of the year. 三伏 (sān fú)

means to separate this hottest period into three parts.

Northern China also has another saying:

Eat dumplings in the first period, then eat noodles in the second, then eat pancakes and omelets in the third.

It just goes to show that understanding the Chinese diet will definitely help you better understand Chinese culture!

is the 13th of the 24 solar terms, and symbolizes the beginning of autumn. This day has a custom called 贴秋膘 (tiē qiū biāo).

It reflects the standard held by Chinese people of the past towards judging health conditions. In the past, on the day of 立秋 (lì qiū),

it was common for people to greet others using their weight, comparing their current weight to their weight on 立夏 (lì xià).

If they had lost weight, they were called 苦夏 (kǔ xià)

- bitter summer, but if they'd gotten skinny, then it was noted they needed to eat more meat to make up for it. The means by which they would regain the weight is 贴秋膘 (tiē qiū biāo).

refers to meats that are higher in fat.

a festival in which sacrifices were offered to the moon. However, because the moon is not necessarily full on the day of 秋分(qiū fēn),

is now fixed on the 15th day of the 8th month of the lunar calendar.

- Frost's Descent. From these two terms, we can see clearly that the temperature is quickly getting colder at this time of year. During this period, the primary Chinese folk practice is 赏秋叶 (shǎng qiū yè)

- admiring the autumn leaves. There is a famous poem that almost all Chinese people know that is worth learning: 霜叶红于二月花 (shuāng yè hóng yú èr yuè huā)

- the frost-covered leaves are more red than the flowers of spring. Beyond admiring the autumn leaves, the other folk practices associated with this time of year have to do with eating; such as eating crab, sesame, and flower cakes, as well as drinking chrysanthemum tea. Additionally, because 重阳节 (chóng yáng jié)

- Double Ninth Festival (the 9th day of the 9th month of the lunar calendar) - also falls during this time, people will also take time to view the blossoming chrysanthemums.

- Beginning of Winter - is the first of the winter solar terms. The modern meaning of the word 冬 (dōng)

is "winter", but what many people don't realize is that the original meaning of 冬 (dōng)

was "end, conclusion". It was only later that the silk radical 纟was added to the character 冬 to give the word 终 (zhōng)

not only expresses the beginning of winter, but also expresses a season during which all normal activities begin to slow down and one needs to store their accumulated energies and resources from the year. Chinese people believe that the human body is like the cycle of the four seasons, and so people must respect the natural life rhythms therein. This is the origin of the Chinese practice of constantly striving to maintain one's health. Additionally, on the day of 立冬 (lì dōng),

occupy an important role in the food culture of northern China, and now 饺子 (jiǎo zi)

are also one of the most popular Chinese foods throughout the world!

- Winter Solstice - is one of the more important ones. There is a folk saying that goes 冬至大如年 (dōng zhì dà rú nián),

meaning "the winter solstice is as big/important as a year", because the arrival of this day signals the beginning of a new cycle of the sun's trajectory through the sky, which in turn symbolizes new life. During 冬至 (dōng zhì),

- sweet soup dumplings, while people in the north will eat, you guessed it, 饺子 (jiǎo zi)

Another important solar term in winter is 小寒 (xiǎo hán)

- Laba Festival, which falls on the 8th day of the 12th lunar month and is a comparably more important festival in northern China. On this day, people will eat 腊八粥 (là bā zhōu)

- Laba garlic, which is garlic preserved in Laba vinegar.

With the arrival of the 大寒 (dà hán)

- Great Cold - comes an important time of preparation for the new year, during which welcoming in the new year is the most important folk practice. The 23rd day of the twelfth lunar month is the "small year" for Chinese people, and from this day on people officially begin preparing the various activities for the new year.

The solar term culture not only reflects the Chinese people's respect for the rhythms of nature, but is also an important basis for engaging in agricultural production. At the same time, the cultural practices encoded in these solar terms are integrated into all aspects of Chinese life, thus forming a specific survival philosophy and wisdom. People associate solar terms with activities related to maintaining good health practices; which over time, gave rise to the Chinese people's culture of survival. At the same time, almost every solar term historically has sacrificial activities associated with it, which closely links the fate of humans with respect for nature, since weather patterns are relevant to agricultural successes, thus affecting how people live their lives. Therefore, by understanding the 24 solar terms and their cultural content, you can better grasp the Chinese people's way of thinking and behavior, as well as achieve a more in-depth understanding of the Chinese language.