Every country and culture has its whiners and complainers, to be sure, but in China there’s a unique breed of pouty called 撒娇 (sā jiāo).

Usually translated as “to act like a spoiled child” or “to throw a tantrum” (or “to act like Congress” for our American readers), 撒娇 (sājiāo)

refers to adults who throw child-like tantrums in public, usually directed at their significant other.

The phenomenon is something that Western audiences generally aren’t familiar with. And it’s an interesting issue as it relates to the evolution of gender roles in modern Chinese society.

Does it make sense for society to accept such excessively childish behavior when women are working so hard to overcome millennia of gender inequality in a patriarchal society?

Is Chinese feminism being harmed by sā jiāo-type behavior? Or, is sā jiāo, in fact, an important part of female identity in modern China – like a secret weapon to overcome institutionalized male bias?

- Chinese women whose success in life has, ironically, priced them out of the dating and marriage market? 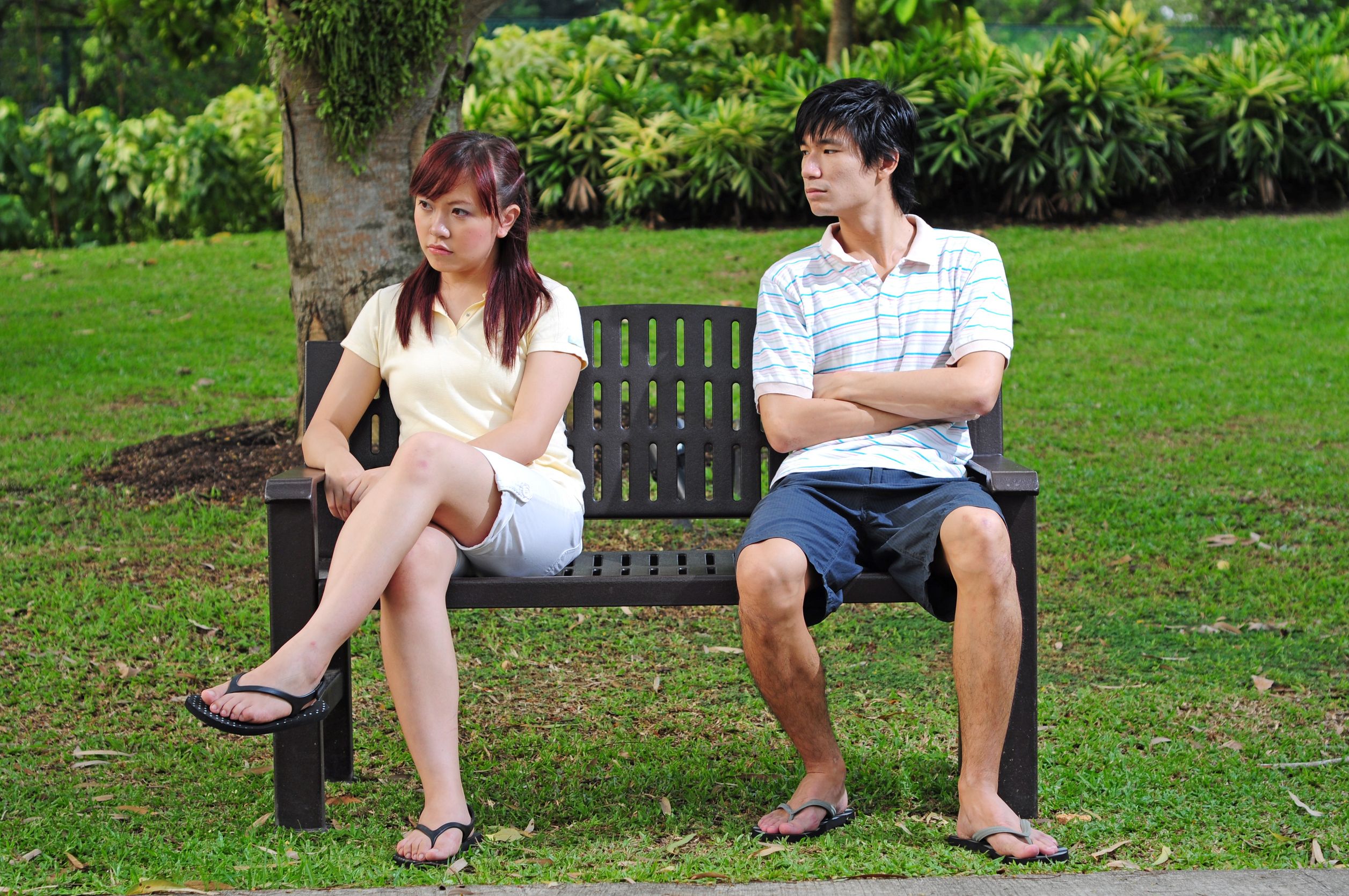 First, let’s take a look at precisely what sā jiāo is – if you’ve never seen a full-on sājiāo in public, it’s a sight to behold.

Grown women (and occasionally men) will stop in the street or sidewalk and cross their arms, stomp their feet and refuse to utilize their senses of reason until the demand at hand is met.

It’s bizarre—and even alarming—to observe as a Westerner. But in Chinese culture, it’s widely practiced and accepted as a part of feminine character.

If a woman doesn’t sā jiāo from time to time, her peers might not regard her as feminine enough.

See how dating is done in China here.

Indeed, a proper sā jiāo is meant to make the aggressor look cute, endearing or deserving of the protection usually granted to children, rather than to intentionally humiliate the recipient.

Let’s break it down linguistically:

sā (撒) literally means “to give expression to” or “to cast out and let loose,”

When you look at the characters individually, the connotation doesn’t seem so negative. And that makes sense because at its core, sā jiāo isn’t about demeaning, criticizing or embarrassing the relevant male. It’s about playing one’s part and asserting feminine identity within Chinese society.

A couple is shopping on a weekend afternoon, on the type of crowded street crammed with clothing stores that you’ll find in almost any Chinese city. She sees a flashy dress/blouse/shirt (I don’t know; I’m a guy), and implores her boyfriend or husband to buy it for her. He declines, and she throws a tantrum fit for a toddler: pouting loudly, adopting a child-like tone of voice, perhaps even playfully striking her man.

From a Westerner’s perspective, it’s tough to watch. We might wonder how she could patronize herself, act in such an obviously immature way and embarrass her partner so clearly. We may even ponder what her actions suggest about the societal standing of women in China – do women really see themselves as children that need to be taken care of and have their smallest whims (and purchases) catered to?

The short answer is: yes, kinda.

is a textbook example of the differences between Western and Chinese concepts of feminism and gender norms.

It helps to consider the magnitude of Chinese culture and society: the Chinese are a people that have arguably existed in their present form for five millennia. That means there are a tremendous number of very deeply rooted cultural norms and practices that are very difficult to ignore or supersede.

Built into Chinese cultural identity is the idea that men are obliged to care for their partners in a way that many Westerners might consider excessive.

, which literally means “to attend to” or “take care of” but also refers to the deeper responsibility bestowed upon males in Chinese society.

For better or for worse, it’s their job to take care of their partners much as they would a child. Seeing to small needs and doting on a daily basis.

This extends to the expectation that men are meant to, in a sense, spoil their partners.

This could mean anything from buying gifts to doing the dishes to the oft-derided practice of carrying her purse (I’ve seen it myself in Shanghai – at first I thought the custom was for men to have their own purses!).

The idea is to demonstrate and solidify the gender norms at play.

Learn what to expect when dating a Chinese guy!

Sā jiāo, then, can be seen as a tool to express displeasure at insufficient spoiling, suggesting that it’s the cultural differences (at least as they relate to feminism and gender roles) that are to blame for our typical Western reaction to sā jiāo behavior, which, again, is fundamentally based on acting childish and immature. It’s simply the traditional Chinese relationship dynamic at play.

Some Chinese other halves strongly believe in "spoiling" – 惯 (guàn)

. It's not uncommon to hear Chinese girlfriends asking their western boyfriends to spoil them. While the request sounds unreasonably absurd in English, in the Chinese language and to the Chinese frame of mind, it's as natural as asking your partner for ‘support.’

I love the linguistic component here – the word 惯 (guàn)

literally means “to spoil” much as we would use it in English, but it’s part of the more common term 习惯 (xí guàn)

, which means “to become used or accustomed to” or “traditional custom or practice.”

Spoiling your partner in Chinese culture, then, refers to the fact that doing so is cultural tradition! Awesome.

Anyway, I was surprised to learn early on in my tenure in China, that not only are many men tolerant of sā jiāo-style behavior – a lot of them enjoy it!

As part of the same relationship dynamic, it can make men feel more masculine or empowered, like they’re playing their part in the traditional gender play.

More to the point, a good sā jiāo session demonstrates the seriousness of the relationship and the commitment his partner has to it. After all, who would act out in such a brash way if they weren’t so committed and involved with their partner?

It’s all about reinforcing a power dynamic that many Westerners would view as bizarre, or at least a bit old-fashioned. This dynamic explains a lot about what’s really going on behind the scenes here.

So is feminism just not as overt in China or something?

It’s a complicated question, but it helps to look at a specific example: the case of the 剩女 (shèng nǚ)

are Chinese women who are considered either too old or too successful to get married. Men are often intimidated by them, and it’s becoming increasingly difficult for these women to find quality partners.

- leftover food, that she could take home for her family.

It may sound bizarre, but it’s part of the same social dynamic that produces sā jiāo shenanigans. Huang Yuanyuan, a self-described 剩女 (shèng nǚ) profiled by the BBC earlier this year, described the complexities of the situation:

In the globalization age, as women in China strike out more on their own and develop their own careers and earning power, the traditional Chinese relationship roles have begun to break down.

- care for his partner if she is far wealthier and more successful than he?

It’s a question that has really yet to be answered in Chinese society, and is one of those inevitable clashes that occurs when a culture (with its own deep-seated gender norms) five millennia in the making rushes headlong into the global scene.

, there’s a lot to tackle when it comes to changing gender roles and norms in Chinese society, and we’ve only touched on a small part of it today.

What are your thoughts, comments or experiences on the topic? Have any of you guys experienced sā jiāo firsthand? Let me know in the comments below!
Yangyang's LIVE Google+ Hangout Lessons Top 5 Chinese Food Related Slang