If you’ve ever visited China (or just spent a couple of hours surfing the internet), you’ll be familiar with Chinglish.

Menus, signs, and tickets are often filled with amusing mistranslations that leave non-Chinese speakers completely confused as to the original meaning.

After studying Chinese for a couple of years, I’ve noticed that a lot of these mistranslations actually make sense. And they give really useful insights into the differences between Chinese and English.

That’s why I wanted to share some of the most helpful Chinglish I’ve come across.

This week we’re looking at what happens when menus go wrong, with a collection of funny food and drink related translation errors.

This is not what you want to see on a menu.

Fortunately for anyone who ordered this dish, the name doesn’t refer to what it’ll do to your own stomach—instead, it’s talking about the ingredients and cooking method.

literally means “explode” or “burst” (I love saying this character aloud – the powerful, violent sound perfectly captures the meaning). But it can also be used to refer to that super-fast, scary method of quick frying food in oil.

does indeed mean “stomach” – in this case likely that of a pig or cow – but a more common English translation when referring to food (as opposed to the human body part) is “tripe”.

As I wrote in a previous post, fried tripe is in fact delicious, and best eaten with ginger, peppers, and spring onions.

What they actually meant: quick-fried tripe

Tweet this: 爆肚 (bào dǔ) - "Explodes the stomach". Not what you want to see on a menu.

– “The peasant family stir-fries flesh for a short time” 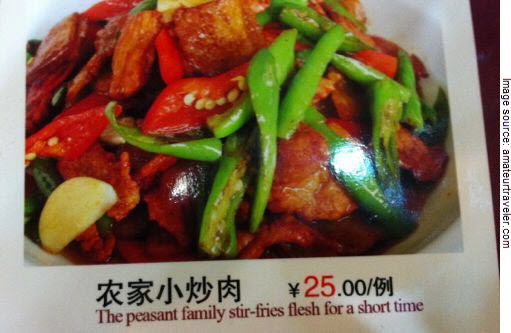 This frankly terrifying translation refers to another tasty Chinese dish.

Understanding the true meaning requires a bit of explanation.

– an expression every Chinese food lover should learn.

refers to all things agricultural, while 家 (jiā)

(When selecting dishes, I go by the rule that anything with 农家 (nóng jiā)

in the title is worth eating).

Compared to English, Chinese offers many more expressions to describe methods of frying food. Thankfully for language learners, almost all of them include the character 炒 (chǎo).

As indicated by the 小(xiǎo)

– small, this particular expression refers to lightly frying food for a short period of time.

literally means meat or flesh, but is often used simply to refer to pork—China’s most commonly eaten meat.

If a menu doesn’t indicate which animal the ingredients have come from, you can assume it’s pork. 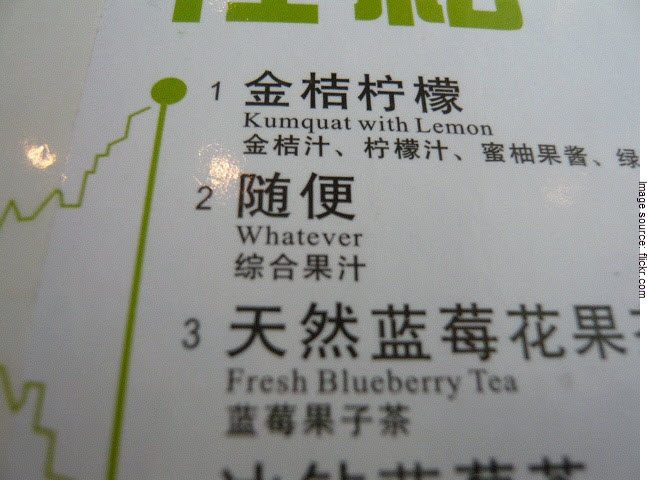 is very close to the English “whatever you want”, or just “whatever”.

In English, “whatever” sounds extremely informal (almost rude), and is something you’d generally only say to friends and family. But 随便 (suí biàn)

can also be used in more formal situations.

For example, if you go into a restaurant in China, the waiter may tell you:

– "Sit wherever you please."

Here, the menu is offering the chance to 综合 (zōng hé)

What they actually meant: create your own (fruit juice) 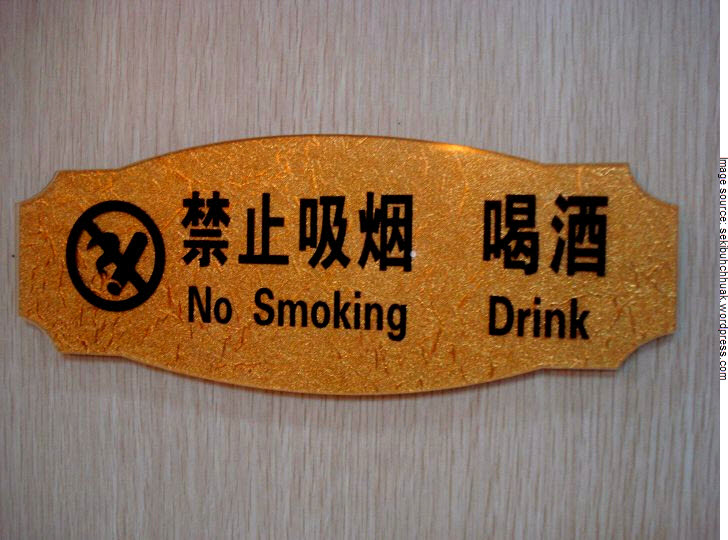 This example looks like they’re commanding you to drink while strictly forbidding smoking. Weird, right?

Well, what this sign actually means is “no smoking or drinking”, which makes a lot more sense.

The confusion arises because of a subtle difference in grammar between Chinese and English. When listing two or more items in Chinese, it’s common just to use a comma for separation, whereas in English we would use conjunctions such as “and”, or “or”.

For example, to translate, “He dislikes smoking and drinking” into Chinese you could simply say:

This is one of the many ways in which Chinese is simpler than English.

Unfortunately for the people who made this sign, it meant they ended up saying the opposite of what was originally intended.

What they actually meant: No smoking or drinking 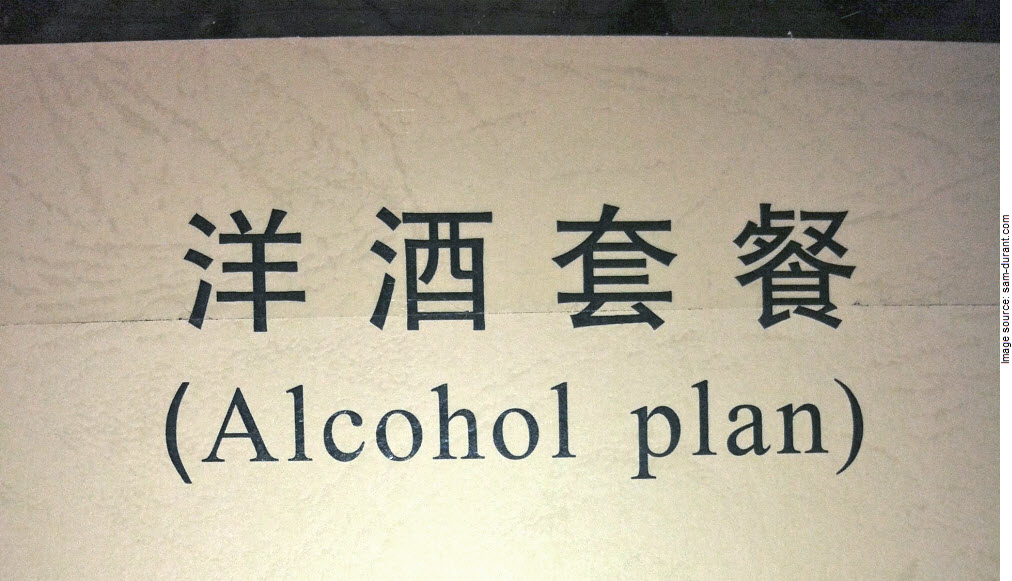 Glancing at the English translation, it’s unclear whether this is the title for a college party shopping list, or a program for giving up the booze.

Luckily, the Chinese can give us a clue as to what this sign actually means.

If you’re an intermediate learner, you may be familiar with the characters:

refers to non-Chinese liquors such as whisky, gin, and rum.

which can refer to a set meal or set menu (as found in McDonalds). But it can also be used to describe a product or service plan, such as a monthly internet package.

Check out our Yoyo 300 Chinese Character lesson on 酒 (jiǔ)!

If you’ve seen any other great Chinglish menu items please share them with us!

Likewise, if you’re struggling to figure out what a particular Chinglish expression actually means, let us know in the comments section and we’ll do our best to help you out.