, which can be used to indicate possession or a description of something, and therefore is used with nouns. If you haven’t checked the blog post out yet, you can check it out here.

This next “de” that we’ll go over in this post is a bit more complex in Chinese grammar, as it’s used with verbs and doesn’t really have a true equivalent in English. But DON’T worry - we’ll go over it in depth with lots of examples to help you grasp these concepts!

Make sure you check out this helpful infographic that lays out all three “de”s and their basic functions, and save it to your phone or computer for reference! You can download it as a pdf here. 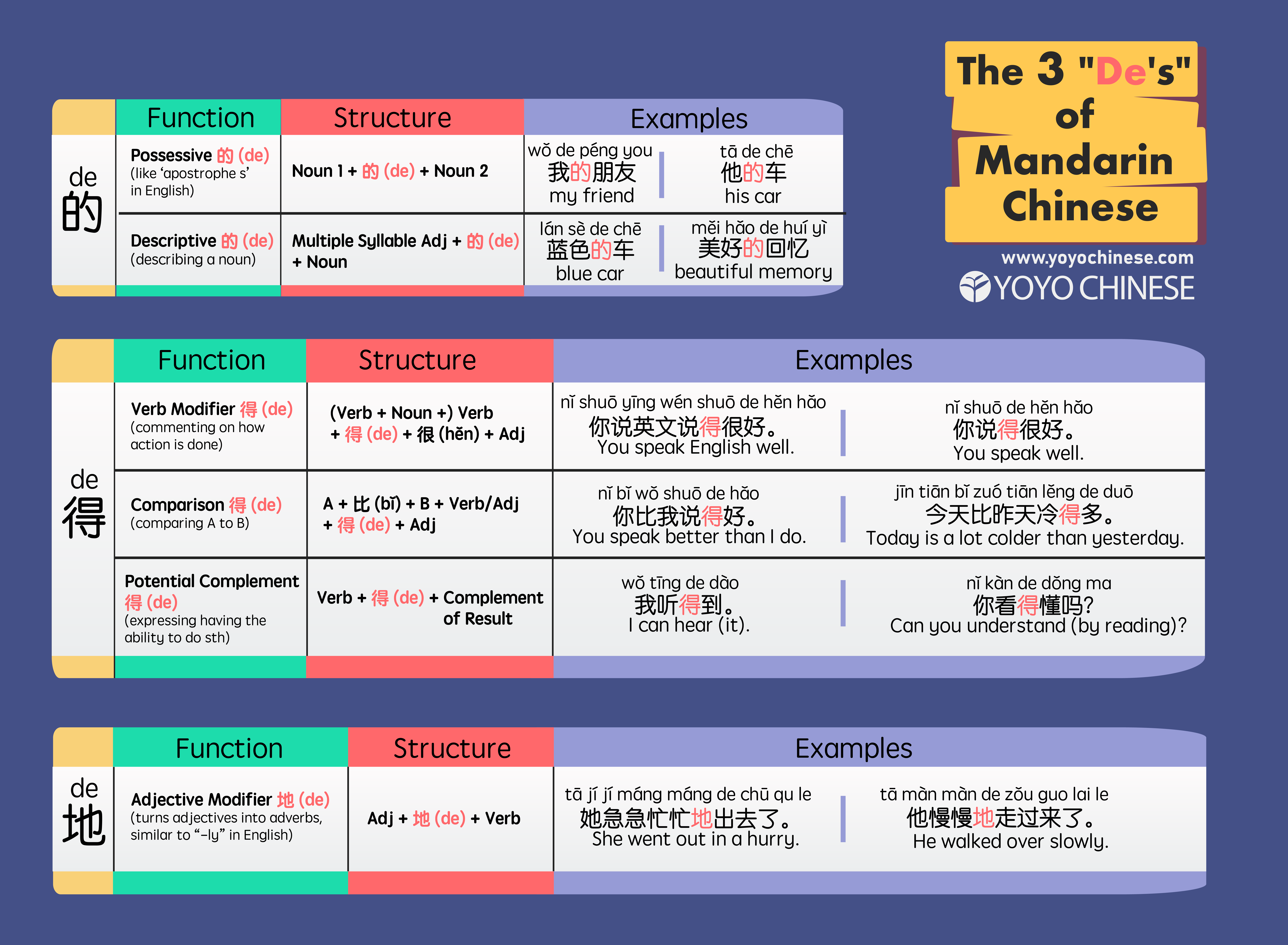 This “de” is used with verbs and adjectives, rather than nouns.

means “person”, so we call it 双人得 (shuāng rén dé)

since the character 得 (de)

If it’s easier for you, you can also just remember it as the same character as the verb “must” in Chinese, which is pronounced 得 (děi)

comments on how a verb is done. This in particular is difficult for English speakers, so pay close attention to it, especially since it’s used ALL the time in Chinese.

In English, we just say “You speak well.”, but in Chinese, we CANNOT translate this to 你 (nǐ)

. We NEED to use a special structure, to comment on the action - it’s called a “Complement of Degree”.

The basic structure is:

after the verb to basically ‘comment’ on the action. Without 得 (de)

, it doesn’t make sense. We also should have 很 (hěn)

in there for this sentence, for a good rhythmic balance.

OK, so now let’s say you want to complement your Chinese friend, so you want to say “You speak English well”.

This is where things get a little more complicated. We CANNOT add 英文 (yīng wén)

The GOLDEN rule that you should always remember, is “verb noun verb 得 (de)

The complex structure, with a noun, is:

. As you can see, we repeat the verb twice, and then the noun goes after the first verb, and 得 (de)

stays after the second one.

Sometimes learning through Chinglish, as above, can really help you commit it to memory - try to remember this sentence: You speak English speak de well.


OK, now there ARE other ways of saying this. You DON’T have to learn all of the different ways to express this. In fact, if anything these variations should show you how hard it actually is to get this wrong! Almost any way you say it is OK: \


You can learn more about the simple structure for complements of degree here, and for the variations, check this lesson out.

can also be used to express that one is able to do something - it's called a "Potential Complement".

With a potential complement, we have a verb, like 看 (kàn)

, it means “to see” something successfully - you’re trying to do an action, and achieving it since the result 见 (jiàn)

is used to indicate someone ‘can’ or ‘is able to’ do something.  So if we wanted to express ‘able to see’ something, we’d say 看得见 (kàn de jiàn) 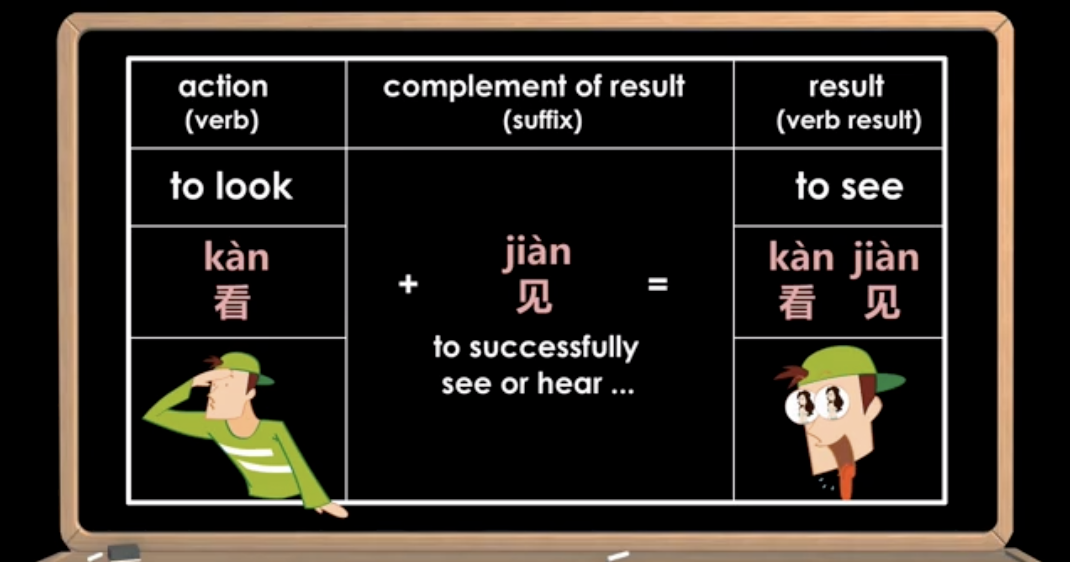 You’ll hear Chinese people use potential complements A LOT, particularly in questions, and this concept can be quite challenging for native English speakers to grasp, so let’s see some more useful examples! 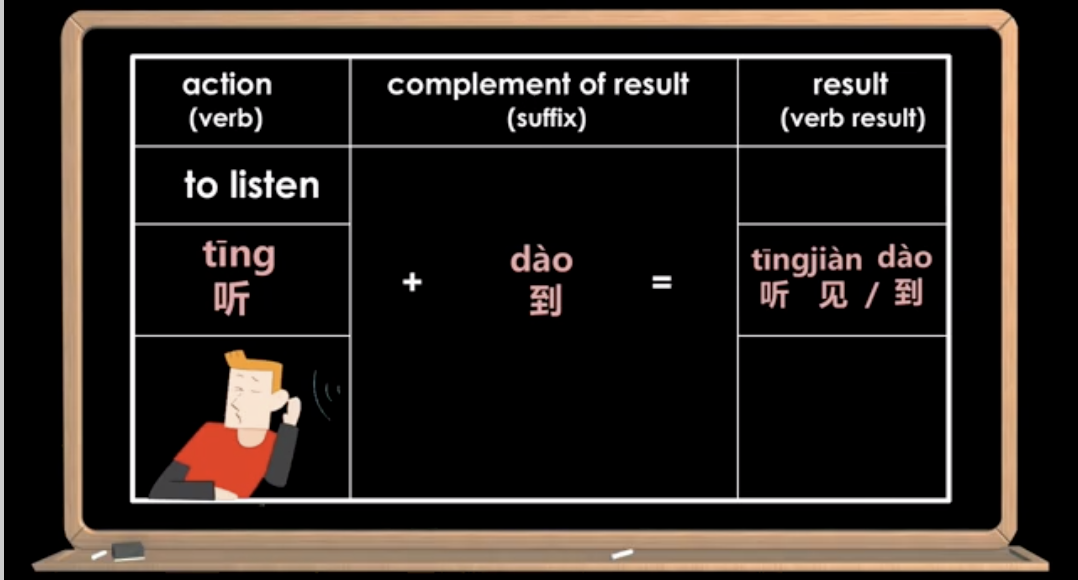 This is some pretty advanced stuff - don’t worry if you’re having trouble with it, the more you see it the more it’ll make sense!


We cover the potential complement in DEPTH in our “Chinese Grammar” Mini Series, so if you’re just starting out, check out the first lesson on it here.

in potential complements, check out this lesson.

Wondering how to express “cannot” rather than “can” using potential complements? Check out this lesson from our supplemental Grammar Series.

can be used in comparisons. This is a bit related to the first 得 (de) we discussed above, which is the Verb Modifier 得 (de)

With the Verb Modifier 得 (de)

, we’re commenting on how an action is done. For example, 你说得很好 (nǐ shuō de hěn hǎo)

With the Comparison 得 (de)

, there’s a similar logic here. We’re talking about HOW an action is done, when making the comparison.

, it means “You speak well”, so if we want to say “You speak better than me”, we just drop the 很 (hěn) and add the comparison word 比 (bǐ)

, which means “than” here, plus the second person or thing, which here is 我 (wǒ)

。You speak better than me.

Please note, when we’re using an adjective rather than a verb, the second adjective is usually 多 (duō)

to make these comparison sentences, check out this lesson from our Beginner Conversational Course.

! Now you have 2 “de”s under your belt. If you’re feeling a bit overwhelmed with the use of 得 (de)

, don’t worry - the more you see it in action, the more familiar you’ll get with it!