Blog / Why is Basketball So Popular in China?

This past summer I heard about a pair of NBA preseason games being played in China, one here in Shanghai and the other in Beijing.

Now, I’m about as big of an NBA fan as there is, but keep in mind, these were preseason games – games that mattered far less with star players frequently playing only a few minutes in most preseason matchups.

Nevertheless, the day tickets went on sale, I hopped online to see if I could pick up a few nosebleed seats, priced around US$40 each (about 2-3x what you’d pay for an actual NBA game in the US).

Within ten minutes though, ALL of the cheap seats had been sold, and there wasn’t a ticket to be found after a few hours – that’s how hefty the demand was.

It got me thinking, why is basketball, of all sports, so enormously popular here in China, and what does it mean for global sporting culture as a whole? 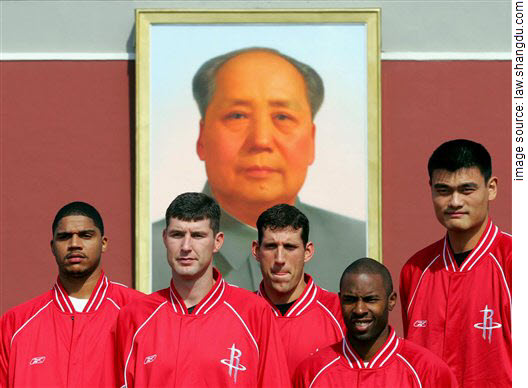 We often think about basketball as a quintessentially American sport, and it is in many ways (even though it was invented by a Canadian), but Chinese people don’t always think of it that way.

For one, the sport was introduced to China by YMCA missionaries in 1895, just four years after the first round orange ball was tossed into a peach basket in the United States. (Seriously, look it up, they used to use regular peach baskets as rims and someone had to climb up and get the ball every time. CUT THE BOTTOM OUT DUDE.)

in Chinese soon took on a life of its own in China, becoming a mainstay on university campuses and even at government offices.

In fact, basketball was the one “Western” thing the Communist party didn’t openly hate on after coming into power in 1949, in part because the game’s teamwork-based structure and emphasis on hard work and effort fit the party ethos quite well.

It didn’t hurt that a basket was relatively easy to set up (hello public works photo ops!) and offered exercise, recreation and team-building opportunities.

There are actually a lot of elements of this legacy visible today: the nation’s top basketball league, the CBA, still features an army team, the Bayi Rockets (so named because of the army’s founding on August 1st – "bā yī (八一)")

, and the army actively encourages basketball among its ranks, with regular tournaments held.

Basketball was played for decades in relative obscurity, and a uniquely Chinese style of play was developed that compensated for the relatively limited stature of most participants. Deft footwork, dead-eye shooting and intricate ball-handling skills all became hallmarks of the Chinese game until a guy named 姚明 (yáo míng) 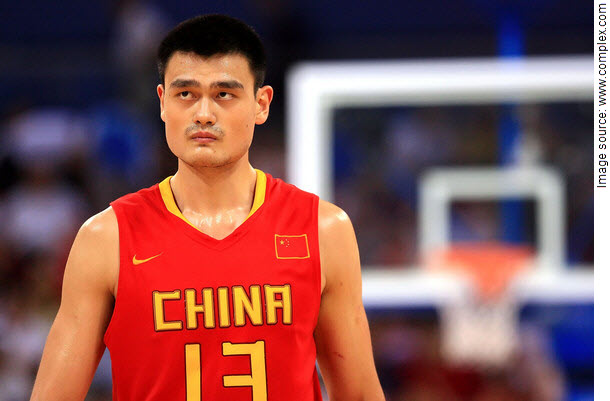 At 7’6, Yao wasn’t just tall for a Chinese guy – he was a human mountain by anyone’s standards. With a smooth game and even smoother sense of humor, he became an international sensation and helped vault the idea of China as a basketball nation into the mainstream.

It’s genuinely hard to overstate how much of a phenomenon Yao and his team, the Houston Rockets, were in China in the early and mid 2000’s. Chinese people love to take pride in their own, and here they had a homegrown star taking the world’s biggest stage by storm.

Yao jerseys sold by the millions (and millions more in knockoffs). He was a spokesman for a ridiculous number of brands and companies, and his face adorned billboards across the country.

Yao’s first game against NBA superstar Shaquille O’Neal in 2003 attracted more than 200 million viewers in China, almost twice the US audience for the most-watched Super Bowl in history.

Even his Rockets teammates, most of whom have faded into basketball obscurity in the US, remain well-known in China. Shane Battier still has endorsement deals here, and one of my old coworkers proudly showed me his computer desktop background, which was a picture of former Rocket Moochie Norris.

If you don’t know who Moochie Norris is, you’re not alone – my coworker got the wallpaper image from a blog called “Random Forgotten Player of the Day.” Nonetheless, Norris spent several seasons playing in the CBA here, coasting on his popularity among Chinese fans. 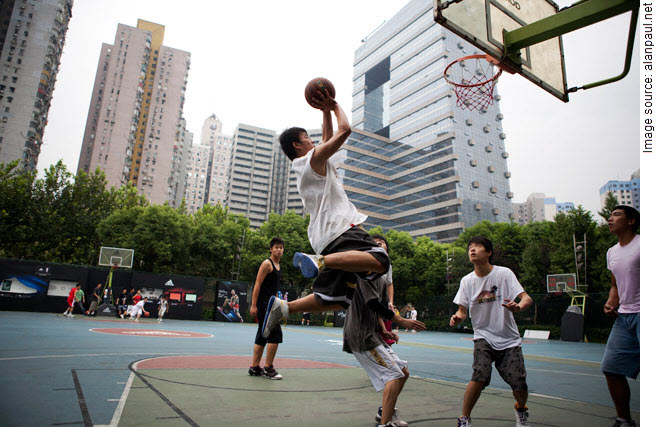 Yao (and later Jeremy Lin) helped draw in more casual Chinese fans and gave the country a unified star and team to root for, but there are a lot of other interesting elements that make basketball so popular in China.

For one, the NBA has put a lot of resources into helping grow the game here, as part of a campaign to cultivate Chinese fans. NBA-sponsored organizations have built nearly a million basketball courts in villages large and small, and for many years essentially gave broadcast rights to CCTV for free.

That’s not to mention that basketball is becoming more and more popular everywhere, not just in China. Though soccer / football is the top sport in most countries in terms of audiences and participation, basketball is often a close second and is the fastest-growing sport in most regions.

In a lot of ways basketball is turning into a “second sport” in much of the world, almost like English has become the world’s second language.

While most countries will have a dominant sport (soccer, cricket, rugby or even American football in the US), basketball is often the second most popular, particularly among youth. The Atlantic, in fact, estimates that by some measures, basketball is not only popular in China, it “may [be] even more popular than it is in the U.S.”

A Most Unique Game 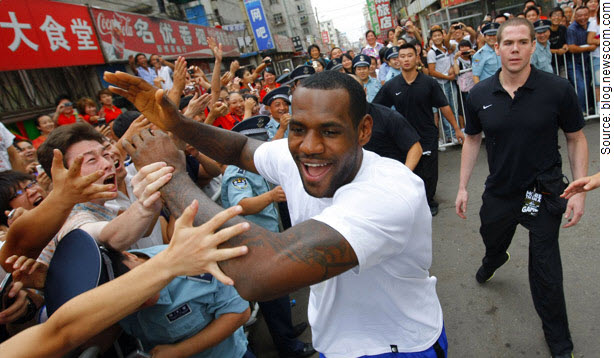 The nature of the game itself also plays a role. Because there are only five players participating from each team at any given time, it’s much easier for an individual player to impact the game and thus become noteworthy.

The ridiculous global fame of people like Kobe Bryant, Michael Jordan and LeBron James are testament to this, as their on-court exploits make them easier to market than players in most other sports – basketball simply lends itself to narratives well. As the New Yorker puts it:

“Cricket remains the definitive bat-and-ball sport of Europe and India, which makes it hard for baseball to gain traction there. American football must compete with sports like rugby and soccer. Basketball falls into its own category; there is no game quite like it.” 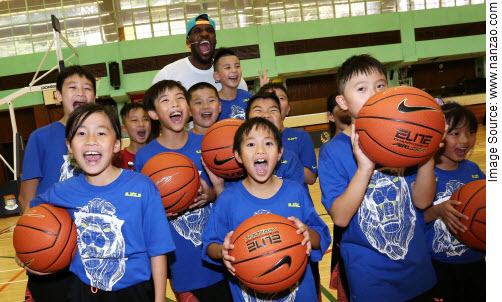 I think there’s a stronger cultural force at work here, though, that might help us understand why basketball is so huge here in China. Have you seen the movie Pacific Rim? Do you remember the (not terribly important) scene in which the Chinese triplets are cooling down from their battle by playing basketball?

That was no accident. That’s what Chinese people do all the time – after school and work, during lunch breaks, or even early in the morning – shoot some hoops to wind down, relax or get ready for the day.

Anyway, this scene is illustrative because, unique among team sports, basketball offers only children a teamwork bond and connection that they can’t get from a family with no siblings.

The small number of players on the court, combined with the way basketball requires equal parts individual brilliance and deference and sacrifice to the group seems to have struck a long-term nerve in Chinese culture.

The game has been here so long that it’s sort of branched off from the American version – basketball with Chinese characteristics, if you will – but still feeds the more modern Chinese affinity for Western starts and flash.

In this sense it appeals to Chinese pride in their own creations, the same way Chinese-dominated sports like ping pong, badminton, and random individual Olympic events have become popular.

China’s place in the global basketball order has also been improving of late. The CBA is now the league of choice for many American and European players who miss the cut in the NBA, something that was unimaginable a decade ago.

While the Chinese men’s national team still kind of stinks, NBA starts now make pilgrimages to China every summer for promotional events and exhibition games, and Stephon Marbury’s embrace of life in China has also helped push Chinese basketball onto the global stage. 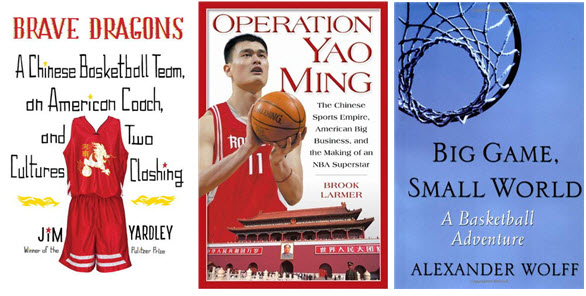 I’d love to hear your thoughts about basketball in China! In the meantime, I’ll recommend a few good reads on the topic, written by people who somehow care more about both China and basketball than I do.

Big Game Small World by Sport Illustrated’s Alexander Wolff – a book I read in high school that actually helped kindle (puns!) my interest in China in the first place.

Operation Yao Ming is also fascinating; a behind-the-scenes look at the forces that helped bring the big man to the NBA, it has some amazing insights about business and sports culture in both countries.

My personal favorite, though, is Brave Dragons by New York Times scribe Jim Yardley. Yardley followed a CBA team through an entire season, and if you’re at all interested in either basketball or China, I highly recommend you give it a look.

Let me know what you think about the basketball phenomenon happening in China right now. Have you noticed it happening? Do you think it'll die out or is it something that's there to stay? Leave a comment below.
Chinese Dining Etiquette Survival Guide Uh, Chinese... Um... Filler Words