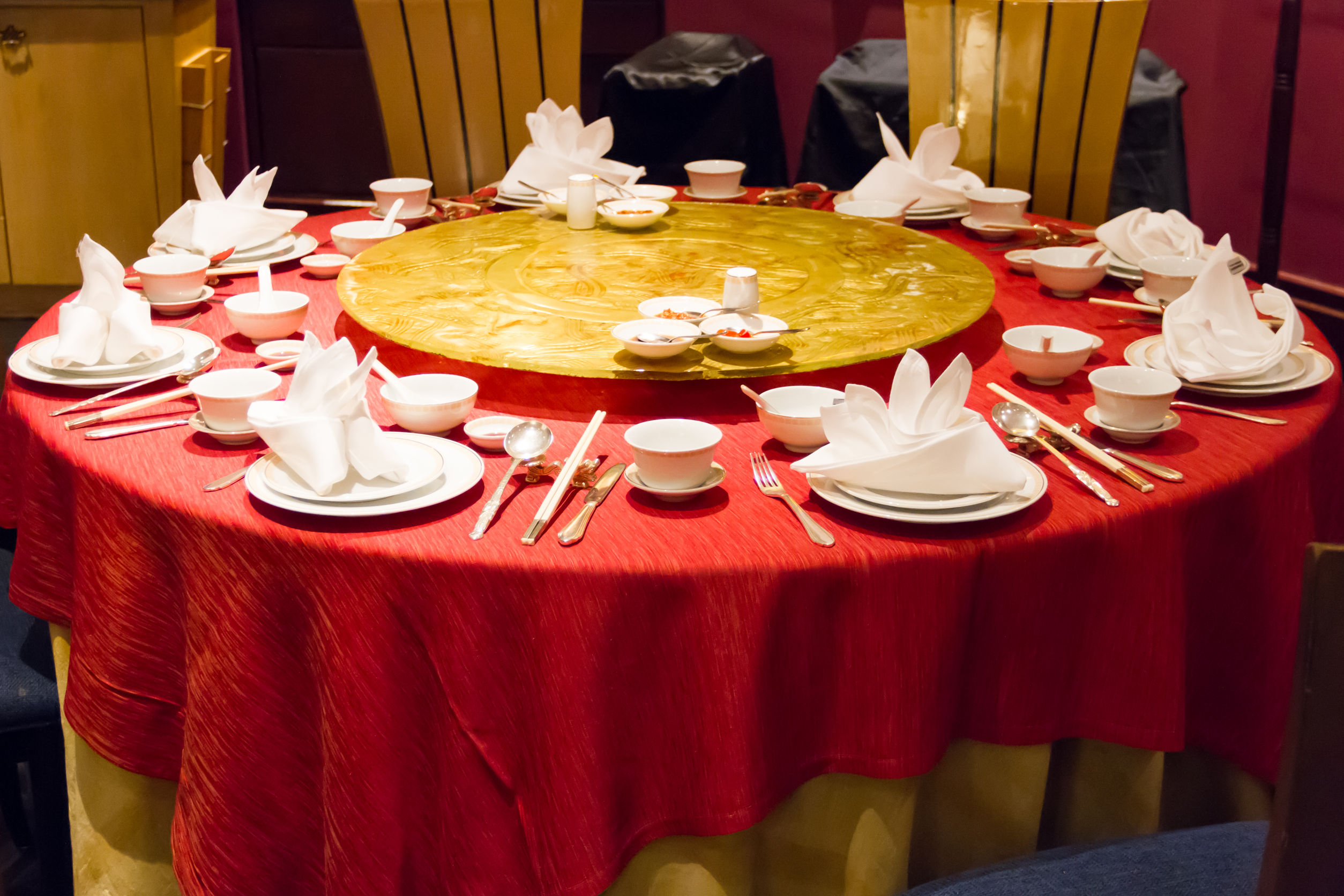 A good friend of mine once observed that some people eat to live, and others live to eat. Many Chinese people, myself included, seem to fall into this second category.

For us, our days revolve around food. After breakfast we think about lunch, and after lunch we plan for dinner. In southern China, there are also dedicated times for morning dim sum treats — zăo chá (早茶)

Food is a central part of Chinese culture. There is great pleasure in sharing meals with family and friends, but there are also important etiquette and table manners, especially in more formal situations.

Chinese formalities around dining are very different, so Westerners who sit down to a delicious meal may sometimes get more than they can chew.

This article walks you through a full Chinese banquet with tips and vocabulary along the way for navigating the dangerous territories of shark fin soup and other dishes.

With this knowledge under your belt, hopefully you can loosen up and enjoy the meal without any worries!

Many restaurants in China offer private dining rooms with large round tables and spinning Lazy Susans.

Seating may not be marked, but don’t be fooled – there are unspoken rules for who sits where.

Generally, the "least important" person of a banquet sits closest to the entrance of the room, directing and communicating with servers. The guest of honor sits across, furthest away from the entrance, back facing the wall.

In formal banquets today, being seated far across from the door is a sign of honor. The most notable guests will be seated near the guest of honor position. Other guests sit nearest the door. 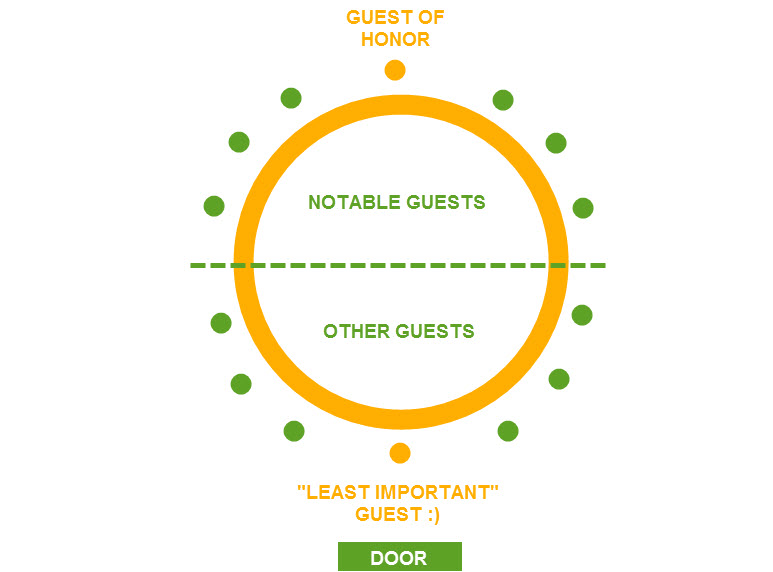 A formal Chinese banquet can involve many courses, with platters of food laid out on the Lazy Susan.

The Lazy Susan eliminates the need to pass the potatoes or ask for yams, but be sure to spin the Lazy Susan in the clockwise direction. If you notice fellow diners sitting with empty plates, it’s also polite to send the platters their way.

Western food is also gaining popularity in China, so don’t be surprised if you see a Chinese potato salad or Caesar salad.

Soup and small cakes may be served between courses as a palate cleanser, and there are typically many proteins as well as vegetarian dishes.

, such as rice, is usually the last course, and you might not want to eat too much of it, as it can signify to the host that you didn’t enjoy the rest of the meal. Fresh fruit is often brought out at the end, as a light dessert.

Fish and seafood are common banquet features, since the character for fish, yú (鱼)

, sounds like the character for abundance, yú (余).  Fish is usually steamed whole and laid out so that the head is pointed toward the guest of honor.

Note that it is also bad luck to flip the fish after the meat on one side has been consumed, as this is like capsizing a boat and can mean capsizing your fortune. Some diners will even refuse to eat the fish if it has been flipped. The better technique is to wriggle the skeleton of bones loose and pull it away.

When you’re dining in a foreign country, it is not uncommon to encounter food you don’t really enjoy.

Your host may still push certain dishes toward you, or someone may even use their own chopsticks to deliver food onto your plate. They do this to demonstrate their hospitality.

It’s polite to give everything a taste, but if you really must decline, you can cite a doctor’s instruction or a food allergy, shí wù guò mĭn (食物过敏)

. This will prevent you from offending your hosts. 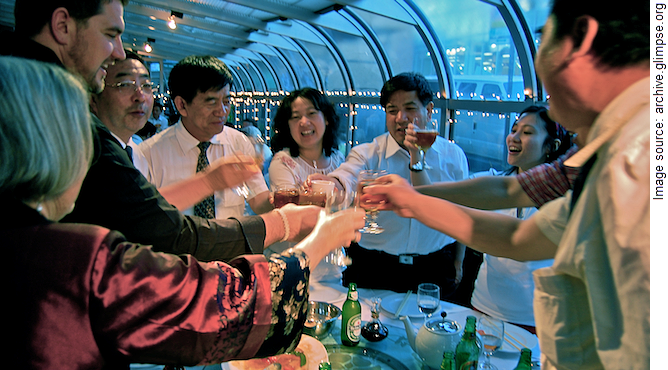 Tea, juice, and alcohol are some of the most common beverages at a meal, and other guests may often refill your glass.

To keep from disrupting conversation, thank them by simply tapping two or three fingers against the table. This supposedly rose out of a Qin dynasty tradition, when the emperor accepted the three-finger tap as thanks because it represented a prostrate figure. But take note where you make this gesture. This practice is common in Southern China and not necessarily done in other regions.

, hard liquor served in small cups, is most common. Beer, wine or other western liquors may also be served. Just keep in mind that they are usually unchilled.

Toasts are common during Chinese banquets, and there may be several versions of the Chinese version of cheers — gān bēi (干杯)

Reaching across a large table to clink cups can feel awkward, so another option is to strike your cup once against the Lazy Susan.

Remember that meals can last a long time, so it’s a good idea to pace yourself with the bái jiǔ (白酒), especially if you are still making that good first impression.

One trick is to keep your lips closed when you raise the cup to your mouth. Although the bái jiŭ (白酒) cups are small, most people take several sips before they actually finish the cup.

At times, personalized toasts may also be raised to the host or the guest of honor. One tradition is to make toasts around the table, so if you ever find yourself in the spotlight, here are a few common toasts to fall back on.

Yoyo Tip: If you'd like to hear the pinyin syllables below enunciated, take a look at Yoyo Chinese's video-based pinyin chart. It has 400+ audio demonstrations for all pinyin syllables and 90+ video explanations for some of the more difficult sounds: /chinese-learning-tools/Mandarin-Chinese-pronunciation-lesson/pinyin-chart-table

For career or personal advancement:

I wish you rise higher with every step!

For the family man:

I wish your entire family happiness!

For the traveler, or for a journey to success (such as for a difficult project):

I wish your path goes with the wind!

I wish you happiness every day!

And, finally, a traditional toast for attaining your heart’s desire:

I wish you good luck!

Finally, with bellies full and appetites sated, we arrive at the dreaded bill. In the simple scenario, an obvious host who has planned the banquet will also take care of the bill.

Unfortunately, most situations are more complicated. 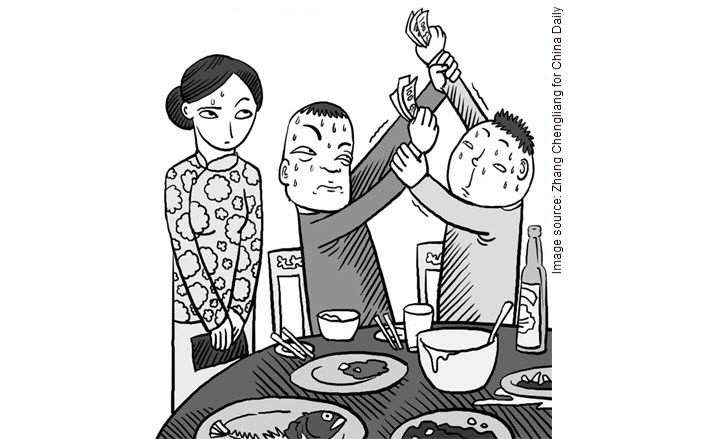 — invite guests — whether it’s out to a restaurant or to a dinner party with home-cooked food.

But even among friends, there may be some mental record-keeping of whose turn it is to qĭng (请)

.The tradition of fighting for the bill stems from fighting to have the honor to host and to invite others.

Nowadays, opinions are split between whether going Dutch, or "AA zhì (AA制)"

is acceptable or not.

In fact, in the Yoyo Chinese Intermediate Conversational Course, we interviewed random Chinese people to hear their thoughts on this matter: 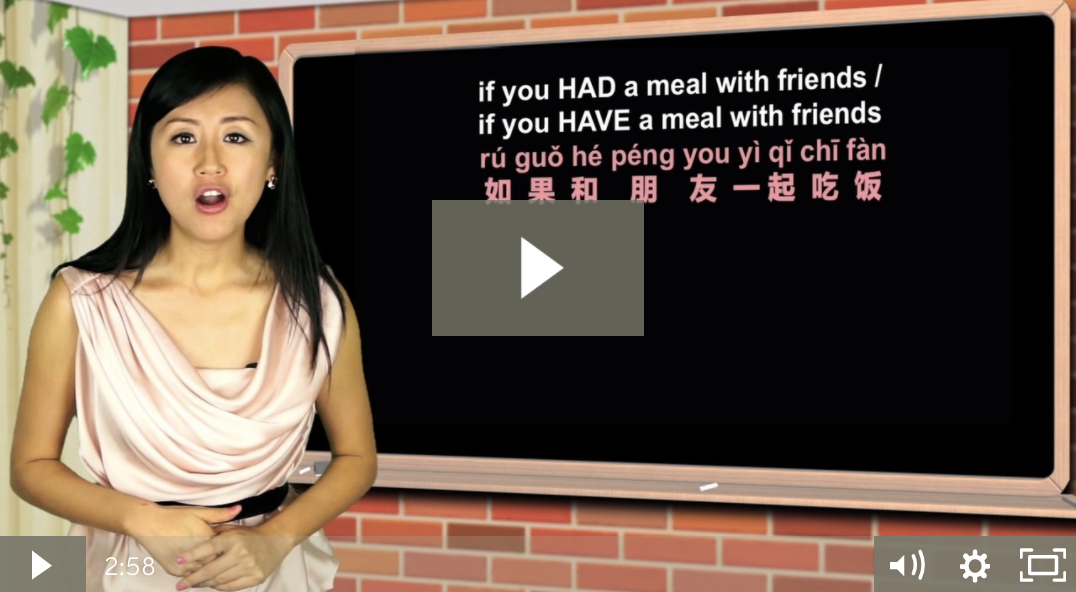 The general consensus is that Chinese people still prefer not to split the bill, so here are my tips for handling various nuanced scenarios:

1. Always make an offer to pay the bill. Here's how it's commonly expressed:

2. If you are serious about demonstrating etiquette and impressing fellow diners with your manners, then offer to pay once or twice more after your initial offer is rejected. You can say:

3. If you’ve made your offers and are ready to end the dispute, then you can give yourself an out by saying you’ll get the next meal

4. If you actually want to get the tab, then you can tell your friend to get you next time:

- You can treat next time

Remember that sometimes, people will be offended if you actually get the bill, because it suggests that you don’t believe they can afford the bill. Saying that they can pay for the next meal helps keep their pride intact.

Of course, on the other hand, they may have already paid for the previous meal, and are ready for you to get this one, and they only offered to pay because they, too, observe good etiquette.

5. If you are truly adamant about paying the bill and your fellow diners refuse to allow it, then direct their attention elsewhere (perhaps by planting a diversion), and grab the bill the moment they look away.

Make a dash toward the cash register, keeping your elbows out to defend against a counter attack. Be prepared to dodge and wrestle your way forward. After all, a post-dinner skirmish is the perfect way to burn those calories.

Confused about anything? See other kinds of etiquette being observed? Tell me about it or your experiences with formal Chinese dining in the comments below.