In my last post, I shared with you one of my favorite suffixes in Chinese, which is “zú” (族)

.  This suffix allows you to form all sorts of interesting and descriptive labels for groups of people who have something in common.  We started with a few examples of various types of “zú” related to technology and lifestyle.

In this post, I’ll share with you a few more of my favorite uses of “zú,” and in order to continue with our theme of groups and labels, I’ll lump them together in two more categories:  job and hobby-related “zú.” 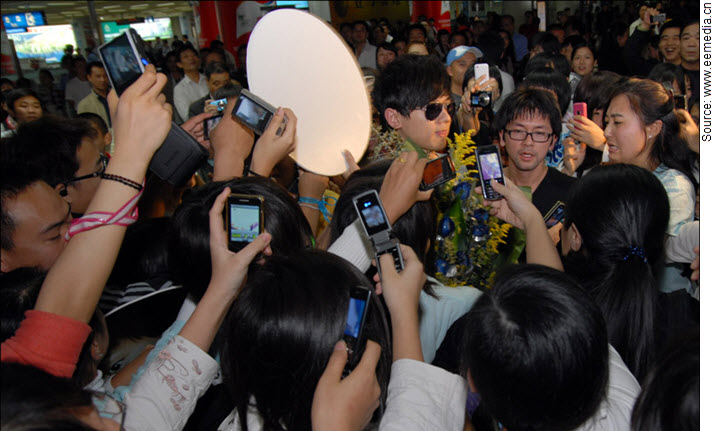 can mean “pursue,” “chase,” or “run after,” both literally and figuratively.

For example, a cat can “zhuī” a mouse and run after it, just as a guy who’s interested in a girl may “zhuī” her, which is a process that usually doesn't require any actual running or chasing (although you never know!).

I learned about this “star chasers” term one time in a Chinese airport. As I was waiting for a friend in the “arrivals” area, a huge group of girls gathered and started jumping and screaming hysterically.

When I asked someone else what was going on, he just shrugged and said, “zhuī xīng zú (追星族)."

Unfortunately, I was never able to catch a glimpse of the celebrity, so I have no idea which famous person was on my friend’s flight that day, but I’ll never forget how to say “groupie” in Chinese.

“zhuī xīng zú” can be terrifying when acting en masse!

How to recognize them:  Same as groupies all over the world. These dedicated fans (a.k.a. “fěn sī” 粉丝

) make it their goal to know everything there is to know about their favorite celebrity, and will do just about anything to get a glimpse or photo of him or her, not to mention an autograph.

This is another very straightforward example, because the Chinese means just the same thing as the English. The difference is that Chinese “backpackers” are still relatively new to the scene.

When people from Mainland China started having the means to travel for pleasure, most preferred to travel as a group with a guide, and stick to an itinerary that allowed them to know what to expect each day of their trip. They just found it to be the most relaxing and enjoyable way to travel.

And that’s still true now, a couple of decades later. Most people don’t want to spend their hard-earned money and vacation time trying to navigate unfamiliar terrain on their own.

But there are a growing number of young people who prefer to travel independently, carrying their own stuff on their backs, and trying to get by on as little money as possible.

They forego shopping opportunities and photo ops in front of famous landmarks that Chinese tourists are famous for and instead pursue hikes and adventures on paths less traveled. They turn away from tour buses and guides with megaphones, and instead rely on guidebooks, locals, and their own two feet.

How to recognize them: In stark contrast to the way their parents travel, Chinese backpackers travel the way backpackers around the world do: they stay in hostels, avoid inflexible travel itineraries, and travel independently, expecting to make new friends along the way. And of course, they always carry their stuff in a bēi bāo (背包)

This refers to workers in a white-collared, office job. They are paid a salary rather than by the hour, and are generally college graduates.  They are officially part of the rat race, whether they like it or not.

, which are blue-collared workers that are doing various jobs rather than following a career trajectory. “dǎ gōng zú” are often paid by the hour and come to big cities from poorer parts of the country.

This “shàng bān” idea of working in an office, pursuing a career, and getting paid a salary according to your qualifications and performance is a relatively new concept in China.

Remember, just a few decades ago, most people were working in jobs that were assigned to them by the government, getting paid more or less the same amount as everyone around them, and wearing basically the same type of clothes that everyone else wore.

The “shàng bān zú” and the idea of climbing a corporate ladder is a big indicator of how much Chinese society has changed within a pretty short amount of time.

How to recognize them: They are checking email on their Blackberries on their way into the office, wearing a suit and looking a little stressed. They stay late at work because they can’t leave until their boss leaves. The younger ones are wondering why they were so eager to find a job in the first place.

Ants are humble little creatures, but they live in strong colonies, know how to get a job done, and are willing to work long and hard. That’s the description applied here for young college graduates who are working their way up from the very bottom of the totem poll.

The media has placed some attention on the plight of these types of young people lately. It seems like most people feel a sense of respect for them.

In a society where spoiled rotten and entitled children of the first generation of rich people in the new China are held in utter disdain, “anties” are like the underdogs that everyone is rooting for.

rely on their parents’ money and connections, the “anties” rely on their own intelligence and each other, and aren’t afraid of making sacrifices now in order to pursue their dreams for a better future.

How to recognize them: They rent a tiny apartment in a big city with several other roommates, sleep in bunks, and live off of ramen noodles. They work long hours and don’t get paid much, but they are smart and resourceful, and their future is bright.

So there you have my list of my favorite uses of the suffix “zú.”  Do you see yourself in any of these?  Or do you have any Chinese friends that might fit any of these descriptions?  Let us know in the comments section!