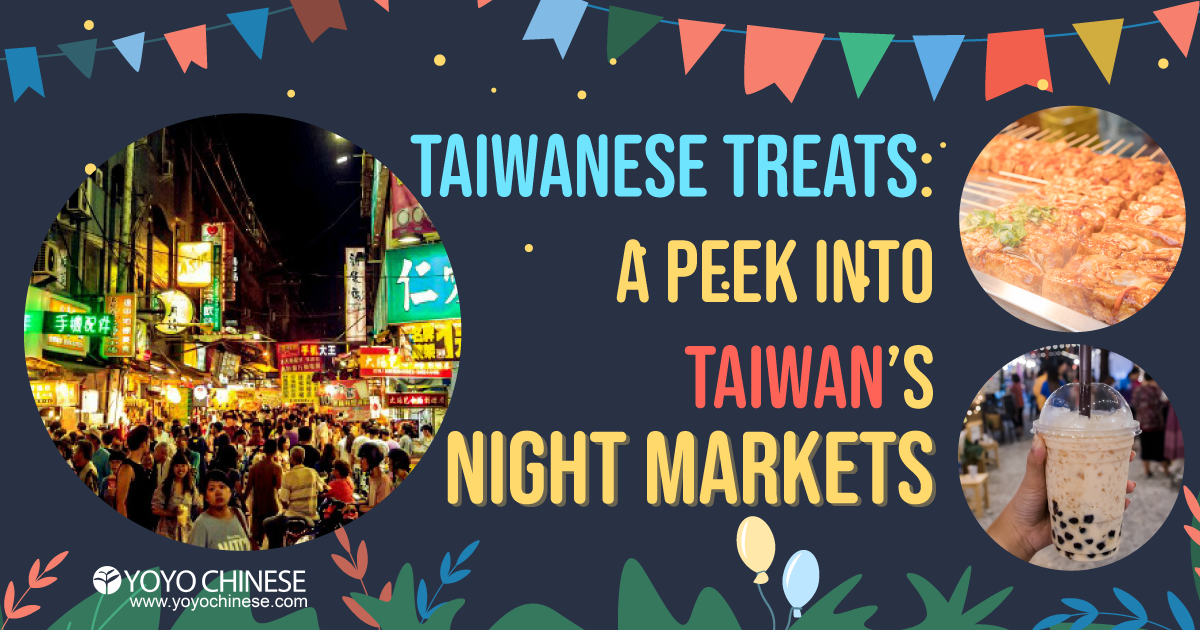 MICHAEL STANCLIFF | MAY 26, 2020
Many years ago, I had the opportunity to study abroad at National Taiwan University, or 台大 (tái dà)

, for short. I got to take some amazing courses, including Chinese Linguistics, Taiwanese Puppetry, and even Economics (I failed the last one gloriously, that’s another story). All of them were instructed in Mandarin.

(I didn’t say I did well, I said I took them. But hey, you’ve got to take risks sometimes, especially when learning languages.)

Like any opportunity to travel abroad, though, the best part was discovering the culture, the people, and, of course, the food. And there is no better place in Taiwan to discover authentic grub than on-site at a night market.

Taiwanese night-life is almost always centered around (or at least accompanied by a trip to) night markets, or 夜市 (yè shì)

. With the literal meaning “night city”, it’s understandable why they are always bustling and never closed; vendors sell their wares almost every night of the year, depending on the location.

Whether it is a large city like Taipei, or a small town like Hualian, you can seemingly always find a street (or a whole couple of blocks) lined with small stands hosted by grandmas and grandpas that have been selling that same singular dish for the past 20, 30, or goodness knows how many years. Sometimes, you even get a peppering of young entrepreneurs as well, putting the latest spin on a classic dish.


Night market stands usually specialize in only one kind of food, such as varieties of Taiwanese sausage, called 香肠 (xiāng cháng)

for those of you taking notes, or one specific food, such as 葱油饼 (cōng yóu bǐng) 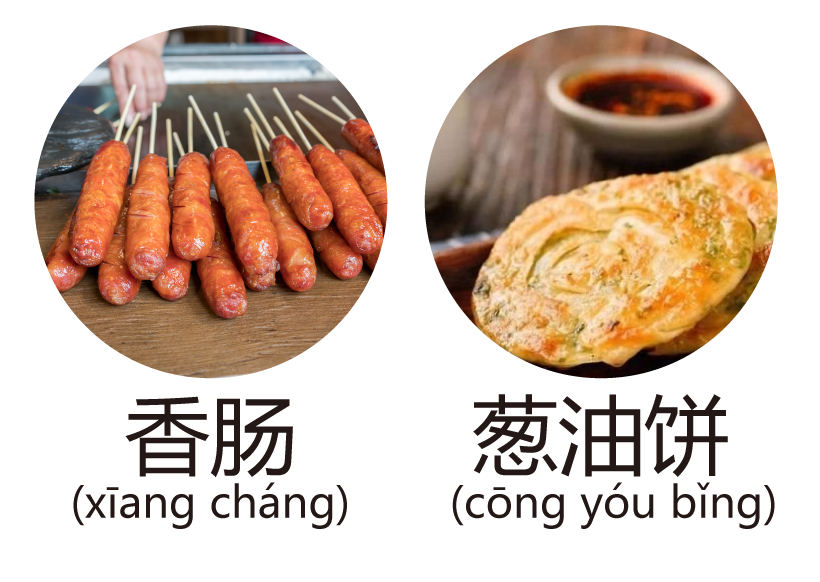 Thanks to all these speciality chefs lined up shoulder to shoulder, you can get high-quality food at a fairly cheap price: I rarely spent more than 100 Taiwanese NTD (New Taiwan Dollars), about 3 American dollars, on any item a-la-carte, or 150 NTD on a full meal, around 5 US.

While some carts are better than others (I certainly had my favorite spots), it’s hard to go wrong with a 鸡排 (jī pái)

, a decadent puff pastry pork bun, from any of these stands.

By the way, Yoyo Chinese has a lesson that covers 鸡排 (jī pái) and some related vocabulary here. 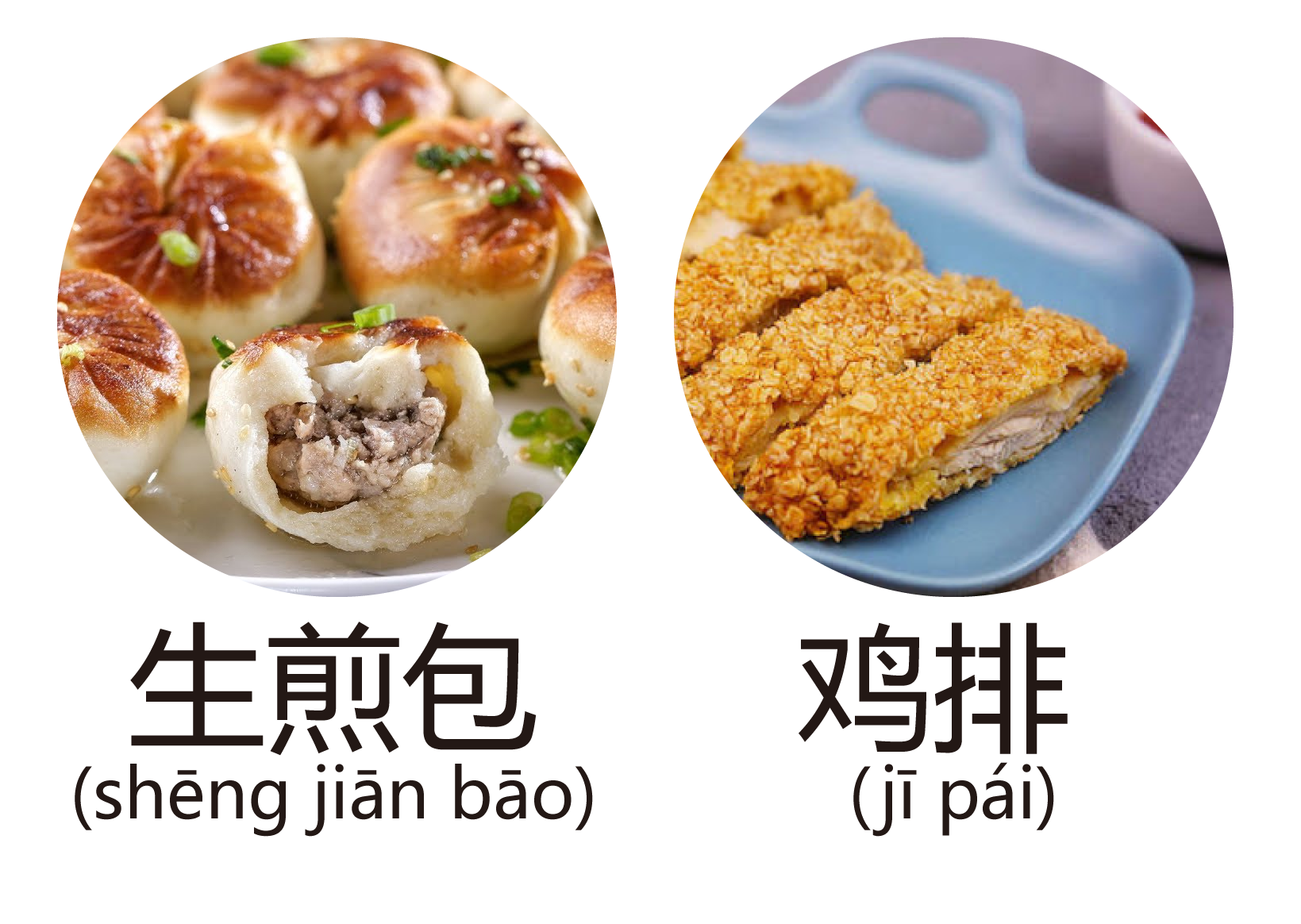 One dish that always surprised me as being extra delicious, despite it’s initial off-putting appearance, was the Taiwanese 蚵仔煎(é ā jiān)

, or oyster omelette. It consists of egg, some veggies (a simple combo such as scallions and celery), oysters (of course), as well as a gelatin (which I later discovered came from sweet potato starch). All this combined to create a yellow-and-clear gooey mound that, honestly, seemed more repelling than appealing at first glance. Top that off with an orange oyster sauce much different from the brown teriyaki one I found at home, and there was certainly call for suspicion.

Until I took a bite. 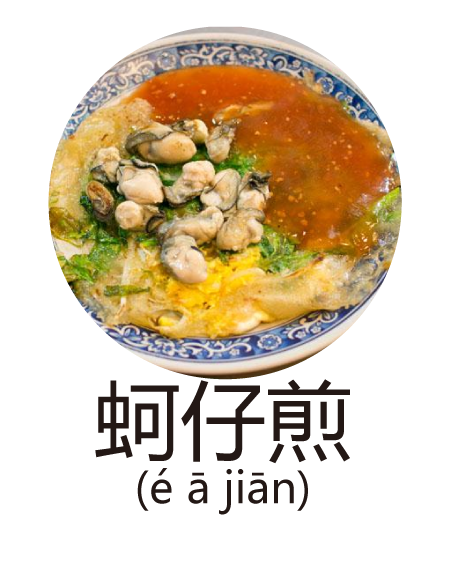 The result was a new love - a true match made in heaven between this amazing cooked concoction and my taste buds. The orange oyster sauce had some of the sweet tanginess of barbecue, but also the spice of the chili-filled hot sauce you can see at nearly every table in Taiwan, whether it be at a restaurant, or in a home. It was a perfect pairing, as long as the sauce wasn’t too spicy.

(That was something you had to be careful with: many of these spots seemed to make their own orange sauce, and what was spicy to one grandma was dull to another. Regardless, this 老外 (lǎo wài)

tried them all, usually with good results.)

The egg combined so well with the richness of the oyster it was something akin to a cheese omelette fresh from the sea. My mouth started salivating whenever I passed a stand that sold them, like a pavlovian dog queued by the scent of the sizzling griddle. I always found myself purchasing one when I went out to eat with friends at night (which was pretty much every night).

Luckily, I was quite into working out at the time, and was also, well, 19, so eating too much wasn’t much of an issue. Even now, at the ripe-old age of 26, I’m certain I would be on the floor if I attempted even half of what I then consumed.

There is no open-bottle law in Taiwan, so you were more than welcome to walk along with an extra large 台湾啤酒 (tái wān pí jiǔ)

- Taiwan Beer (the ubiquitous brand in Taiwan) at the ready as you strolled your way through the lines of delicious, inexpensive salties and sweets. 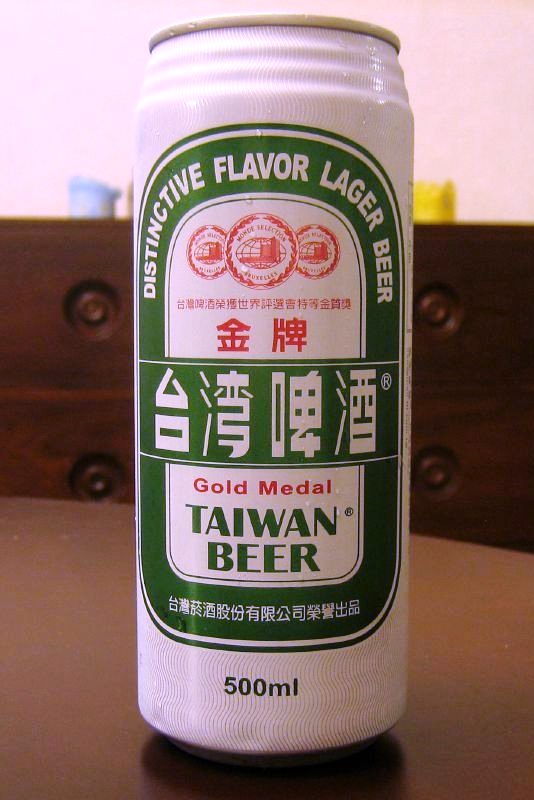 You usually wound up buying more than you could eat, eating it anyway, and finding the the next morning that - although you did still have to go to class at 8 am (a cruel trick on their part, if you ask me) - you wouldn’t have done a single thing differently.


The craziest part is that some of these stands were completely illegal...

...at least, any of the ones that blocked traffic.

And trust me, a lot of them were very often plunked down dead center of the road, in order to allow pedestrians, and therefore customers, on both sides.

, one of the largest night markets in Taipei, and therefore the country.

As I strolled down one of the roads off the main drag (it was just wide enough to have sets of vendors in alcoves built into each side, as well as lining the center of the street), I suddenly found myself dodging a square, dull-brown streak as it shot off from the center of the road and disappeared into I-still-don’t-exactly-know-where.


While exactly howabouts the booth from the center aisle managed to clear its operation so quickly I’ll probably never know, the reason became clear as I looked up. I found myself backing my way out of the street to allow a cop car to pass through the middle of the road, a feat impossible on this small back-alley had there been a now-understandably-illegal stand in the center of it.

Nonetheless, the grandma-made delicacies being pushed out by these ninja carts were, frankly, far more important to the well-being of the city than having something as insignificant as proper traffic patterns be available, at least in the opinion of this hungry foreigner.


Looking back at the two or three times this happened in my six months abroad, I couldn’t help but feel that the cop’s delegated to this work had pulled the short straw at some weekly precinct-night-out.

It was all too easy to see them, drinks in hand, as the captain joked, “All right, who’s going to bust the grandma’s at Shilin this week? Make sure you catch them in the act!” As they all laughed heartily, not a single one wanting to catch or find the nanny who’s perfect puff-pastry like pork buns they themselves had enjoyed long before they ever even considered pulling on a badge.

While I never saw these conversations happen myself, I would certainly be quite unsurprised if I ever did.


Trying the cuisines every night under the lights of a brand new city was always an amazing experience every time I went out, whether I was with a pack of 留学生 (liú xué shēng)

- foreign students - from my study abroad program, or strolling along with a bunch of locals (I took the effort to become part of local college groups, so I could really practice my Mandarin and make friends), there were always endless local foods and delicacies to try, corners of the city to explore, and of course, people to meet and befriend. 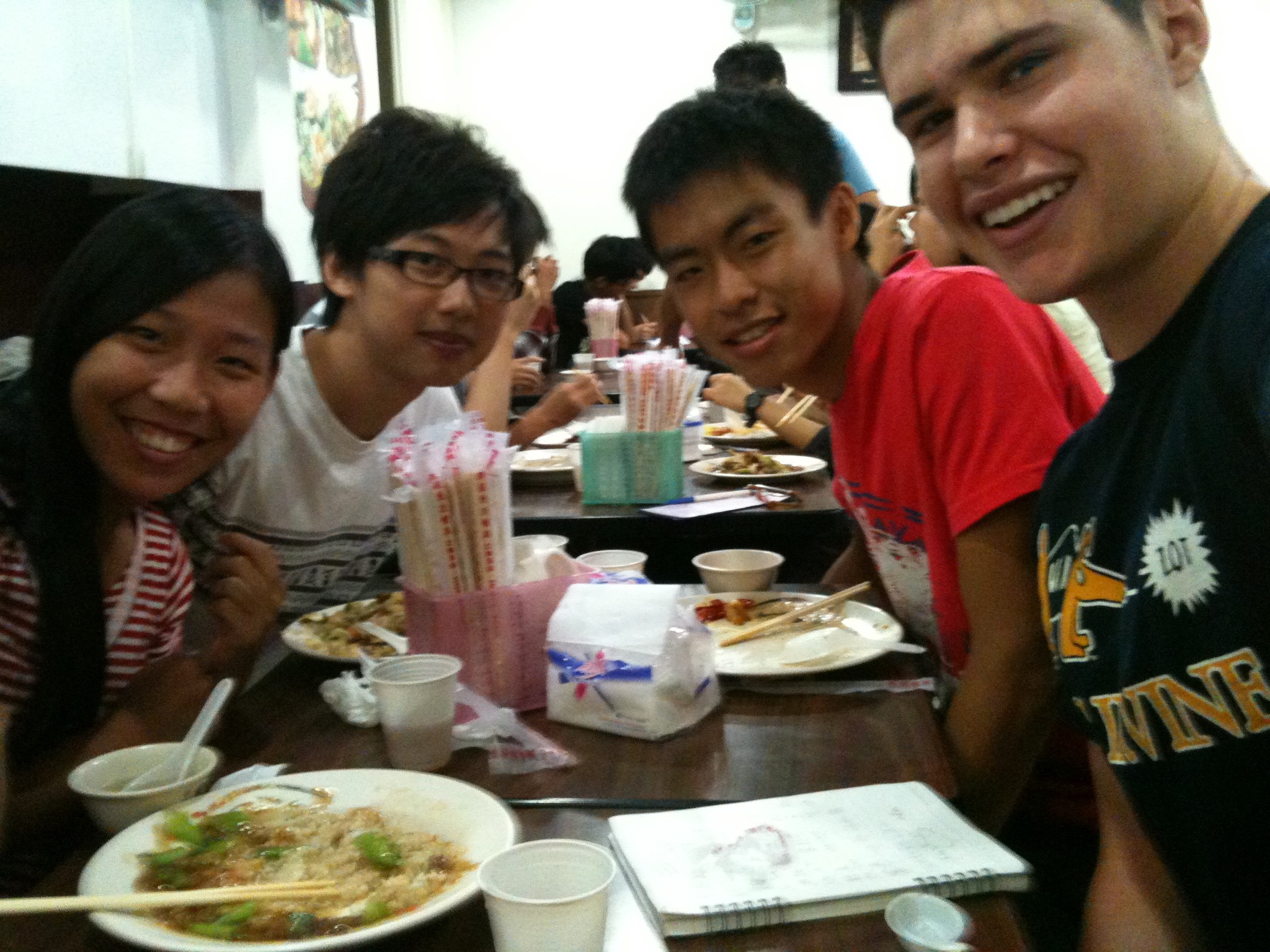 - Taipei 101 (one of the tallest buildings in the world) or by the beautiful countryside in a city like Hualian, diving into a delicious Taiwanese sausage with friends.

Regardless of how long it is until that happens again, those nights (and their markets) will always have a special place in my heart.

I would not have had the same experience in Taiwan (or any Mandarin speaking country) if I hadn’t put in some solid time studying the language before I went.

My biggest advice is to follow a structured, comprehensive program and study every. single. day.

Yangyang, the team here at Yoyo Chinese - and most important their conversational and Chinese character courses - are awesome. It’s why I wanted to write for this company in the first place.

If you plan on studying in Taiwan or China like I did, or visiting and getting some of this drool-inducing night market food - or just want to challenge yourself to learn a new language - TRY THESE COURSES!

Level 1 of their Beginner Conversational Course is FREE, and is like a mini-course in pronunciation, pinyin, tones, and basic grammar and vocabulary. Start here with Lesson 1: 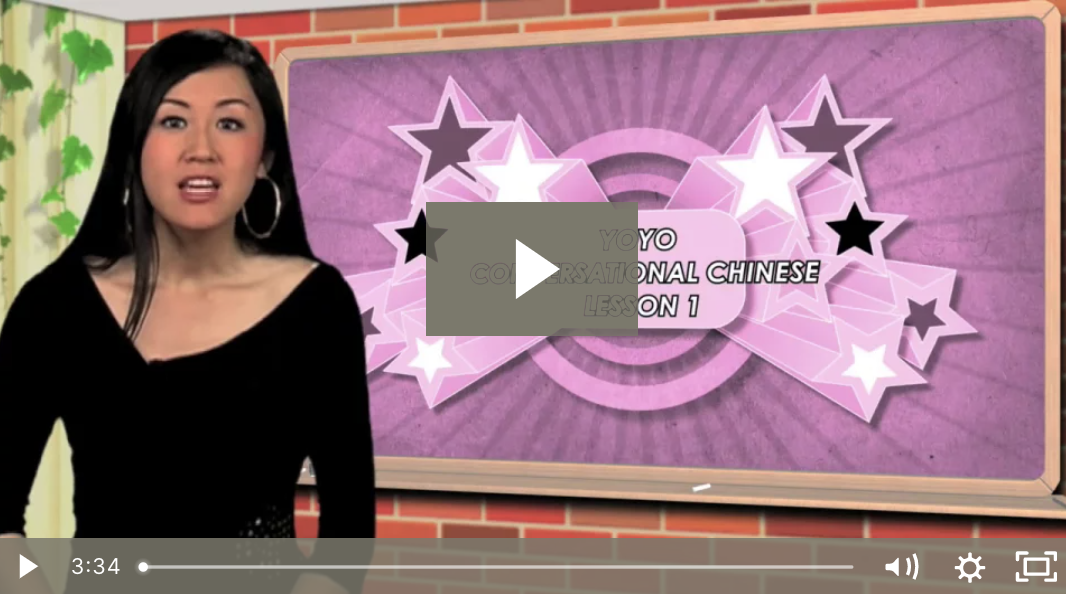 Enjoy exploring all the insightful and informative lessons Yoyo Chinese has to offer, and I’ll see you here again soon, hopefully writing from a far off country in the east, instead of here at my quarantine headquarters just south of Los Angeles.