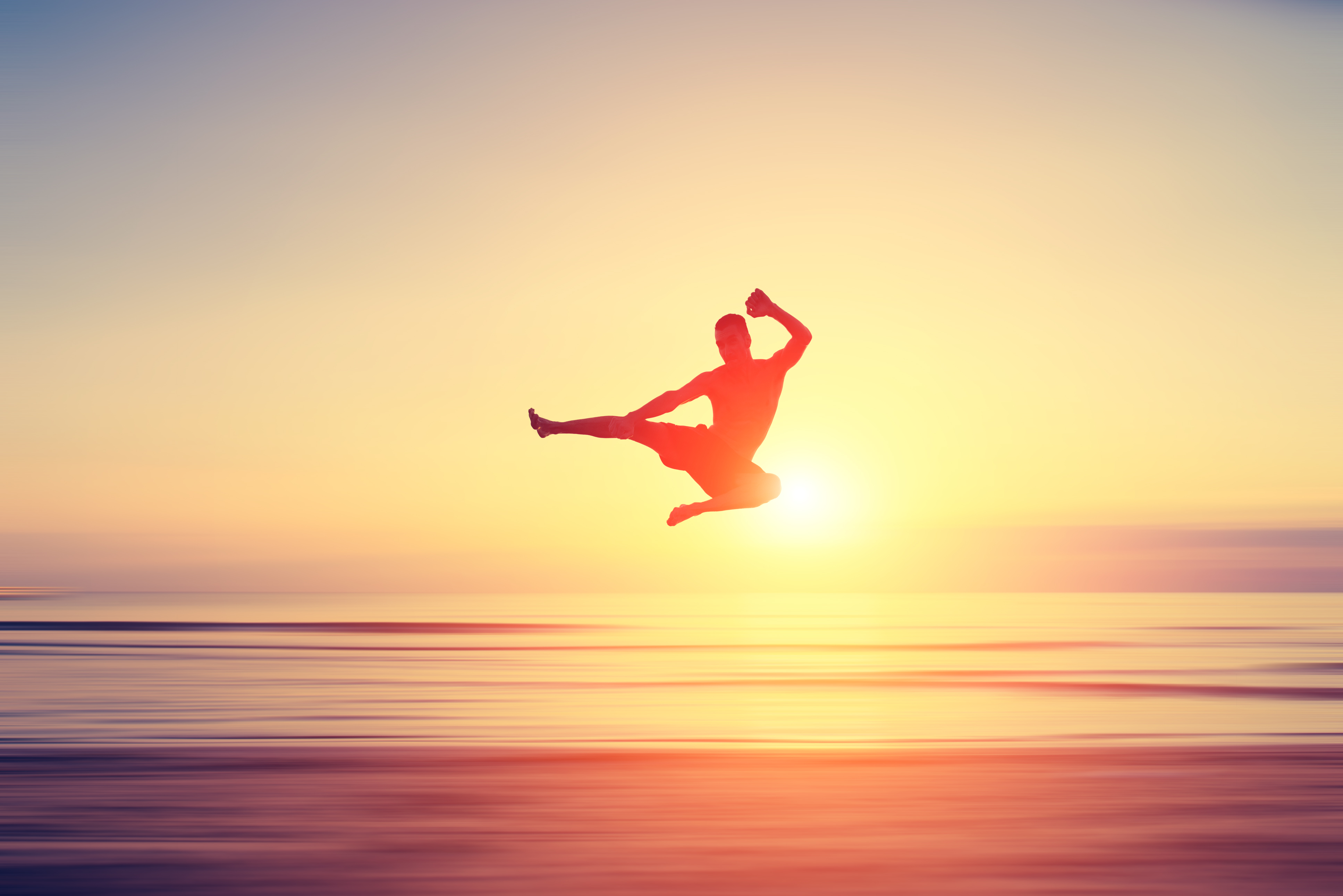 "Be Water, My Friend" - Even When Learning Chinese!

What was the first piece of Chinese culture that you encountered?
The majority of Westerners will answer this question with either Chinese food, Chinese New Year, or kung fu.

When you think of kung fu, who is the first person that comes to mind?
I bet for a lot of you the answer is Bruce Lee!

Bruce Lee's films are indeed the starting point from which many people began to develop an interest in kung fu, and thereby Chinese culture as a whole. Considering what a huge icon of Chinese culture he became, and that 2022 is the Year of the Water Tiger, let's explore some of his teachings and how they can help us better learn Chinese!

In Chinese culture, water is one of the five main elements and is seen as the source of life and ancient civilization. Water has an intimate relationship with people, nature and society. Bruce Lee's life also was deeply influenced by the element of water. As everyone knows, during his time living in Hong Kong, Bruce Lee took on 叶问 (yè wèn)

- Ye Wen, the Ip Man - as his master. While he studied martial arts, Bruce Lee encountered many hardships, and even gave up for a time; but he eventually returned to his master and persevered in his training. There was a period of time where Bruce Lee's progress was extremely slow, almost to the point of stagnation. So Ye Wen told him to temporarily stop his training, and return home to think. Bruce Lee stayed at home for a week, but couldn't figure things out, so he chose to go out to sea to ease his worries. On the boat, the more he thought the more agitated he became, to the point that he punched the water with his fists. It was this action that gave him a sudden realization of the special characteristics of water, which proved to be the exact lesson in kung fu that he needed. For the many years following this moment, Bruce Lee continuously used the essence of water to contemplate martial arts and life.

One thing that many people don't know about Bruce Lee is that not only was he an exceptional martial artist, but he was also considered to be a philosopher. Only 3 months after he was born in the United States, his parents took him back to live in Hong Kong until he was about 19 years old, after which he then returned to the United States. These 19 years gave Bruce Lee the chance to fully immersed in traditional Chinese culture, making him very different from the many recent generations of Asian-Americans that grew up entirely in the United States. Bruce Lee's solid grasp of the Chinese language was the main gate that opened him up towards the culture of China.


After Bruce Lee returned to the United States, he enrolled at Washington University and for one of his minors he chose to study philosophy. As he continuously studied martial arts, his every gesture and motion gradually contributed to his contemplation and understanding of philosophy. Combining this with the inspiration he had about water in his early years, in his 1971 interview on the Pierre Berton Show, Bruce Lee shared his view on the true meaning of martial arts.

Martial arts are the art of expressing the human body in combative form.

On some level, he saw martial arts to be similar to spoken language, music, art, and all other forms of expression and communication. This is even apparent in the meaning of the Chinese word for martial arts: 武术 (wǔ shù).

is like the "naturalness" that our bodies posses as Bruce Lee mentioned in the interview; and 术 (shù)

means "method," "skill," and the control that a social being  holds - just like the "unnaturalness" that Bruce Lee talks about. The combination of the two creates 武术 (wǔ shù)

and contains the true meaning therein. This is similar to language, in that people naturally have an inherent inclination towards language, and how one utilizes and takes control of that language is something that one obtains as they become a social being.

"Be Water, My Friend"

In an 1971 episode of the TV show Longstreet, there's an extremely famous and classic line that Bruce Lee came up with:

“Empty your mind. Be formless, shapeless, like water. Now, you put water into a cup, it becomes the cup. Put it into a teapot, it becomes the teapot. Now, water can flow, or creep, or drip, or crash. Be water, my friend.”

- Way of the Intercepting Fist, was inspired by this same "water philosophy." It had a very unique style and generated vast and deep influence. Understanding this "water philosophy" can also provide excellent inspiration for learners of the Chinese language. First, don't overly expect that the things you learn from Chinese textbooks will be completely congruent with real life. You must adapt to both what you learn from the books and reality and accept their differences. You must proactively adapt, otherwise you will feel disappointed and discouraged, maybe even to the point of giving up on learning. For this very reason, from the very beginning Yoyo Chinese courses selected materials from real life, reducing the frustrations and barriers that our learners experience when they try to use Chinese in their lives and empowering them to gain a better grasp of the language.


Secondly, whether it be listening, speaking, reading or writing; it's best if you start learning whichever skill comes easiest and seems most interesting to you. No need to force yourself to try to master all four aspects of the language from the beginning. Just as Bruce Lee said, "Water can flow, or creep, or drip, or crash," be flexible as you choose whatever method and rhythm best suits you. It's more important to protect your interest in the language and motivation to learn. There's no universal method that is perfect for everyone, so don't try to tackle everything at once; you want time to be on your side.

The element of water also holds a very important seat in Chinese culture. In fact, 2,000 years ago during the spring and autumn seasons, the famous Taoist sage, 老子 (lǎo zǐ)

- Tao Te Ching. In it can be found a incredibly profound illustration of water. On page 78 it is the following line:

and yet for attacking things that are firm and strong, there is nothing superior

nothing can take its place

- Chinese idiom - that captures this nicely:

So returning to the topic of learning Chinese, the essence of water tells us that as long as we are persistent, we will reap the desired reward. Those that just want to learn Chinese through shortcuts, watching a few unsystematic videos, or playing highly gamified apps are never going to be able to truly master this language. And for adults who wish to successfully learn a new language, they must follow the language learning process, learn to adapt, and compliantly follow the laws of systematic learning.

In that same 1971 interview, Bruce Lee delivered his own personal opinion on learning Chinese:

"If you learn to speak Chinese. I mean, it's not difficult to learn and speak the words. The hard thing, the difficult thing....it's behind, what is the meaning, what brought on the expression and feelings behind those words."

This is an extremely important point for Chinese learners. In linguistic terms, Bruce Lee is talking about pragmatics - the ability to effectively use Chinese language based on the situational context. This is the reason that Yoyo Chinese as always been an advocate for using real-life situational context to teach and learn a language. The entire Yoyo Chinese lesson library follows this principle, using video content filmed from unscripted, real-life situations as learning materials; causing learners to understand the importance of context from the very beginning and truly grasp the correct usage of each word in any situation. Bruce Lee's point is very important for Chinese learners even today, in that when on learns a language they must learn the different meanings, implications and expressed emotions of each word in different contexts. Just like "come on" in English, if someone doesn't understand the different meanings and uses it has across different contexts they will never truly elevate their understanding of the phrase.

Famous Chinese Sayings About Water You Should Know

water can carry a boat, and it can capsize it too
Tang Dynasty emperor 李世民 (lǐ shì mín)

frequently used this phrase to warn himself and other  officials about how to govern the country. Water can be soft and weak, but when it gathers together it can also form into an immense power. Every common person is like a drop of water. When they come together, they form a power without equal. This line is often used to warn the government that as they govern the country, they must take seriously the power of the people and respect their rights.

the greatest good is like water
This is also a phrase from Laozi's 道德经 (dào dé jīng).

He explains that water benefits all while striving for nothing. People often take this phrase on as their life's motto or great pursuit.

water that is too clear will have no fish, a person that is too astute will have no followers
In other words, one should be wary of becoming too shrewd, lest they be seen as too harsh and be left with no friends. Nowadays this phrase is most commonly used to tell someone they shouldn't let their expectations of people or things to be too high.

friendship between gentlemen is as clear as water
This phrase implies that when people seek to build a friendship, it should be for the mutual benefit of connecting with a kindred spirit, not for any self-serving motive of vanity.

running water never grows stale
This phrase is a meaningful analogy for how one must continually practice what one learns, lest they forget it; or how one must maintain frequent activity in order to have lasting energy. Bruce Lee often used this line to describe the process of 太极拳 (tài jí quán)

- Tai Chi / Shadowboxing. The hand movements are like running water, always moving without ceasing. It has a kind of 阴阳 (yīn yáng)  - Yin & Yang, an infinite artistic conception. Learning Chinese, or any other language or skill, is the same; only through constant practice and review can one truly master the knowledge that they study.

- the three dots of water - is an extremely important radical of Chinese characters. Basically every character related to water will have the 三点水 (sān diǎn shuǐ). For example:

We hope that during 2022, the year of the Water Tiger, every Chinese learner can be inspired by Bruce Lee's thoughts on water; finding the methods that best suit themselves throughout the learning process; and persistently studying, practicing, reviewing and adapting to differences between what they find in their textbooks and real-life experiences. We also hope that they can make good use of the real-life content and systematic lessons provided by Yoyo Chinese to finally be able to speak fluent Chinese and gain a better understanding of Chinese people and their culture.