If you've paid attention to the Chinese New Year in the past, then you'll likely have an understanding of the firecrackers, dumplings, red envelopes, and ubiquitous red decorations involved. Beyond this, in the Chinatowns of the world, whenever Chinese New Year rolls around, there are also lion dances, dragon dances, and parades organized in order to celebrate. However, in addition to all these things, many people find themselves curious about one other thing: the Chinese Zodiac.

2022 is the Year of the Tiger, and you may find yourself asking:

In today's blogpost, we'll help you understand the answers to all of these questions!

History of the Year of the Tiger

With respect the origins of the Year of the Tiger, there are numerous stories and explanations, but the most popular among them goes something like this:

Originally, there was no tiger among the 12 zodiac signs, in its place was a lion. But the lion was savage and cruel, consequently 玉皇大帝 (yù huáng dà dì)

"the Jade Emperor" wanted to replace him with a tiger. At this time, there was great unrest amongst the creatures on earth, and they were endangering humans. Because of this, the Jade Emperor sent the tiger to the earthly realm to manage the unrest and promised him that for each victory obtained he would be rewarded. After the tiger arrived in the earthly realm, it became known to him that the lion, bear, and horse were the three strongest of the animals there. So he decided to tame them, and in so doing quell the unrest.

The Year of the Tiger

Many people use the internet to check which years are of the tiger, but what many people don't realize is that you only need a simple calculation to determine which years are the Year of the Tiger, or any of the zodiac signs, for that matter. However, before getting into how to calculate it, what we need to first explain is that the 12 zodiac signs are connected to the lunar calendar. For example, if someone was born on January 31, 2022, this person would not actually have been born in the Year of the Tiger. Rather, they would have been born in the Year of the Ox. This is because February 1st, 2022 on the solar calendar corresponds to the first day of the first month of the 2022 lunar calendar. It's only on this day that we officially entered the year of the tiger.

"the beginning of spring" as the first day of the new year. Consequently, we now have the name 春节 (chūn jié)

"Spring Festival" for this time of year. It wasn't until the year 1912 that the government of 孙中山 (sūn zhōng shān)

and instead is treated simply as another solar term. However, because 立春 (lì chūn)

typically falls around the same time as 春节 (chūn jié),

the arrival of spring is always accompanied by a joyous atmosphere. Because of this fact, many people believe that the most accurate way to calculate the zodiac is based on the date of 立春 (lì chūn).

However, culture is typically conventionalized through common practice, and so calculating based on the date of 春节 (chūn jié)

is also reasonable. Which way would you calculate it?

Speaking of how to calculate, the method of doing so is actually quite simple - all you need to do is take the year, subtract 6, then divide by 12; if the result is a whole number, then you'll know for sure it's the Year of the Tiger. Take the year 2022, for example - we first subtract 6 to get 2016, which we then divide by 12, giving us 168, which is a whole number and tells us that this year is the Year of the Tiger. If you want to know the other years, all you need to do is adjust the calculation in accordance with the ordering of the zodiac. For example, the ox comes 5th in the zodiac cycle, so when we do the calculation we would first subtract 5, then divide by twelve. Once again, if the answer is a whole number, we know it's a Year of the Ox.

Of course, for the sake of convenience, we've listed the most currently relevant years of the tiger:

Personality Traits of People Born in the Year of the Tiger 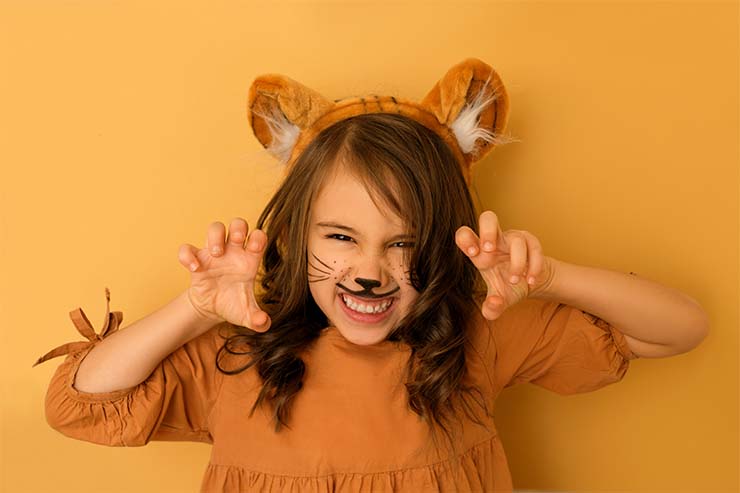 One of the more interesting parts of the Chinese zodiac is similar to that of the western system of astrology, namely personality traits; and everyone hopes to understand what kind of personality is represented by their own zodiac/astrological sign. In one of our previous video series, Make Desserts and Learn the Chinese Zodiac, the main personality traits for each sign were briefly discussed.

This may actually be a natural psychological response, using the positive aspects of something to subtly change one's thinking, and thus influence their personality. So, understanding the personalities of those born in the Year of the Tiger may actually aid in manifesting those very personality traits. What, then, are the positive qualities associated with people born in the Year of the Tiger? They can be summarized as follows:

While each of the zodiac signs possesses positive qualities, they also naturally embody certain negative qualities and shortcomings. For those born in the Year of the Tiger, some of the areas of improvement are summarized as follows:

Of course, these personality descriptions are only generalizations; and in fact, in Chinese culture, the formation of an individual's personality is subject to many variables, such as what time of day they were born, which elemental property is dominant in a given year, and even what name they are given.

Year of the Water Tiger

An especially noteworthy point is that the year 2022 is the Year of the Water Tiger, which only occurs every 60 years. The water tiger is a comparatively complicated notion, but if you're already familiar with the Chinese five elements then it will be easier to understand. Each of the five elements corresponds to two 天干 (tiān gān)

"heavenly stems", which are used in combination with 地支 (dì zhī)

"heavenly stems" are an ordinal system used for indicating the first, second, third, etc. These days, Chinese people still use this ordinal system as they did before, but only for smaller numbers and typically only in indicating people (as in a scripted dialogue). For example: 甲 (jiǎ)

"third", etc. The full list of 天干 (tiān gān) from first to last is as follows:

are also matched with the five elements:

The final two of the heavenly stems, 壬 (rén)

are matched with water.

"earthly branches", which are delineated by the 12 sections of the sky traversed by Jupiter through the course of its 12 year orbit around the sun. These 12 sections in order from first to last are:

Furthermore, these 12 branches are used in the names of each of the zodiac signs: 子鼠 (zǐ shǔ),

etc. In this way the combination of the heavenly stems and earthly branches is used to measure the passage of years, with each cycle lasting 60 years. This means that the year 2022 is 壬寅虎 (rén yín hǔ),

and because 壬 (rén)

is associated with water, this year is called the Year of the Water Tiger.

Check out our previous blogpost, "Be Water, My Friend" - Even When Learning Chinese! , to learn how to apply Bruce Lee's teachings about water to become a better Chinese learner!

In ancient China, the tiger symbolized boldness, valor, and dignity, and was seen as the king of all the beasts. Because of this, the tiger also symbolized power and honor. This is likely because the markings on a tiger's head resemble the character 王 (wáng)

"king", and so the ancient monarchs had a particular fondness for the tiger. In ancient China, when the emperor sent his military forces to fight, the symbol of their imperial authority was made to look like a tiger, thus symbolizing their ferocity on the battlefield and their ability to win time and time again. Consequently, the symbol of imperial authority was also called the "Mark of the Tiger".

Because the tiger symbolized boldness and valor, the ancient Chinese also used the tiger to describe those officers and solders who were fierce warriors and highly capable on the battlefield. During the Three Kingdoms period, there were the 五虎上将 (wǔ hǔ shàng jiàng)

"the five great generals of Liu Bei", characters who are familiar to most Chinese people to this day.

During the 宋代 (sòng dài)

who was later regarded as a model for all officials because of his honesty and freedom from corruption. In many works of art, the three cleavers of 包拯 (bāo zhěng)

"the tiger-head cleaver" is used exclusively for the punishment of corrupt officials.

Beyond just symbolizing boldness, ferocity, dignity, and power - tigers also have a cute side to them. Chinese people will describe boys who are grow to be sturdy and honest as 虎头虎脑 (hǔ tóu hǔ nǎo)

"strong and good-natured", literally "tiger head, tiger essence". But following developments over time, the use of this descriptor has gradually decreased, being largely replaced by words like 聪明 (cōng míng)

has come to imply "not terribly smart".

Words & Phrases that Use the Character 虎 (hǔ) 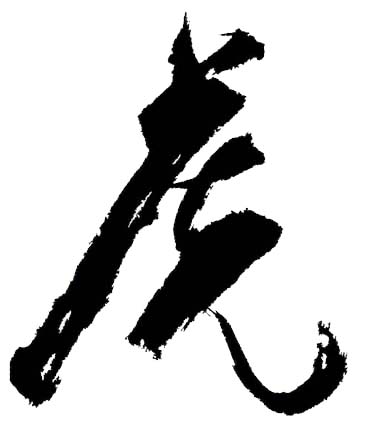 Many words in Chinese make use reference to animals, especially 成语 (chéng yǔ)

"tiger" is a frequently used one. The first 成语 (chéng yǔ)

"careless, half-ass a job" was also explained in our video Make Desserts and Learn the Chinese Zodiac (Episode 3): Tiger and Rabbit Macarons. Other than 马马虎虎 (mǎ mǎ hū hū),

there are plenty of other words and expressions related to the tiger, though in general they aren't used all the often in daily life. Some of the more commonly used expressions are as follows:

Used to describe two people who don't get along, between whom there is often conflict. It's also used to describe situations in which there can only be one winner.

Describes a person who starts strong, but can't keep up the intensity while doing some task or project.

Describes someone with a sturdy and solid physique.

doughty as a dragon, lively as a tiger

Describes someone who is particularly lively and full of vim and vigor.

Describes a place full of skilled and capable people. Also may be seen as: 卧虎藏龙 (wò hǔ cáng lóng)

Describes a dangerous place, comparing them to the places where dragons and tigers live.

Many of the expressions related the tigers have a positive connotation, but at the same time, there are a few that possess
negative connotations. What's particularly important to pay attention to is that in northeastern China, if you simply use the word 虎 (hǔ)

to describe someone, it implies that the person does things carelessly, is a bit stupid, and does things regardless of how dangerous it may be. So, if you're in northeastern China, don't just call anyone a tiger!

Now you know a bit more about the Year of the Tiger and it's significance in Chinese culture! Hope you enjoyed learning with us today and have a few more fun Chinese phrases that you find useful along your Chinese language learning journey as well!