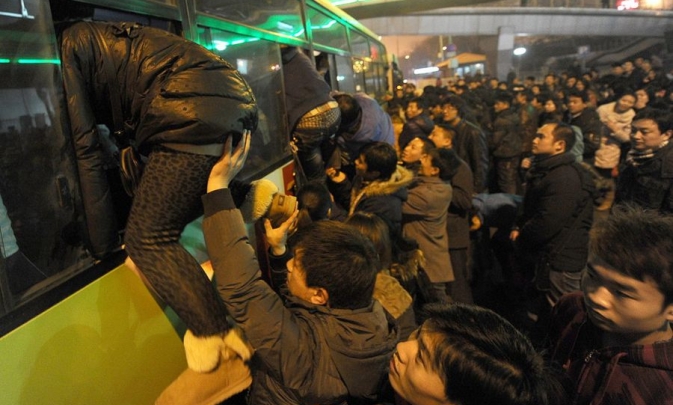 There are a million articles out there on the culture shock Westerners experience in China (we’re guilty as well), but I’ve found that the reverse culture shock you experience upon returning to the West is just as profound, if not more so.

It’s partially the cultural differences, of course, but it’s also due to the cognitive dissonance of finding strange what you should, by definition, find familiar.

So here we go, my top 5 reverse culture shock moments!

One guilty pleasure of life in China is that you can sort of openly say whatever you want (in English or any non-Chinese language) in public, safe in the knowledge that few if any people will be able to understand. Making fun of people’s haircuts, telling personal stories, etc.

It’s so deliciously fun that it becomes habit quickly and so when you return to the US you have to do a lot of self-censorship initially.

I remember one trip back to the States, I was walking around in Brooklyn and said to my friend, “Jesus, there are hipsters everywhere, this is ridiculous!” and he gave me a death stare – the hipsters could understand me (they’ve gained sentience of late)!

After years of going back and forth I’ve gotten better at it but I still occasionally catch myself commenting on the large number of white people around... that must be an odd thing to overhear for the people around me.

The other end of this is that you can instantly understand everything happening around you, like signs, announcements in stores, random conversations, etc. Even if your Chinese is really good, in China these things are almost like white noise, and it’s very easy to tune them out.

It’s a bit overwhelming the first time you walk into a Walmart or Target and there are 8 million things demanding your attention and you’re actually able to fully pay attention to them.

There’s a strange dichotomy for foreigners in China: On the one hand, you’re sort of anonymous, insofar as the locals regard you as more of a curiosity than a real person, and you can kind of get away with doing things you never could in the States because people will just attribute it to your laowai-ness and not want to interfere.

On the other hand though, you’re almost like a celebrity everywhere you go, as you’re likely to get stared at and approached for English lessons and the like (it doesn’t happen so much in big cities anymore, but I still get gawked at in Shanghai every single day – I like to think it’s because I’m just that handsome!).

In the US you are just like everyone else. No one pays special attention to you, no one sneaks looks at you in restaurants, and no one gives a crap about your problems. In China you always feel a little bit special, even if you’re just waiting in line to pay your phone bill.

This change can take a little while to get used to, and it made me realize how hard it must be for real, actual celebrities to deal with their fame fading. As a result, you lose your streetwise-ness, to a certain degree, as you’re so accustomed to standing out.

I got ripped off on buying some scalped tickets last time I was Stateside, for example, because I figured the guy would never try to cheat me since we were both laowai! Whoops.

One of the hardest things to get used to in China is surprisingly hard to get un-used to later: the food.

So much food in China is eaten on the street or family-style in restaurants, and I was so used to ordering a bunch of dishes and then sharing it with everyone that I instinctively forked some pasta off of my sister’s plate at a restaurant and she thought I’d totally lost my mind.

It’s also easy to forget how large portion sizes in the US are.

I’m not a small guy by any means, but I have a hard time cleaning my plate in the States, just because I’m so used to the smaller quantities of food we’re presented with here in China.

That said, one of my favorite parts of being there is the awesome and diverse range of food you can get - though this is increasingly the case in big cities in China too!

Westerners in China constantly complain about the “everyone for himself” attitude that a lot of Chinese people have in public: pushing into elevators, cutting in line, treating the street as a bathroom, general rudeness, etc.

Few will admit, however, how quickly we acclimate to this standard and adopt these habits.

Case in point: me. My mom is mortified to be around me in public on the first few days of my US visits because I’m constantly being rude to people (waiters in particular), trying to cut in line and generally just trying to skirt the rules wherever I can.

I went to a basketball game last time I was home, for example, and sat in the cheap seats a few rows from the back. The arena was pretty empty so my friends and I tried to move up to better seats, but the usher wasn’t having it, and I kept thinking, in China this would be no problem!

Sure there are rules against doing that, but no one really cares, especially when you’re a foreigner, and it’s very easy to get used to how loosely rules like that are enforced.

I actually got a ticket for making a U-turn at a no U-turn intersection because I figured no one would really care – that was a serious wake-up call.

With Spotify, Hulu and the like it’s pretty easy to stay current on what’s happening in the West in terms of pop culture, but there’s still an element that you miss out on by not being there.

You may know some random pop song, for example, but when you mention it to your friends they groan because it’s in some commercial that gets played 100 times a day or it’s played at every bar and they’re sick to death of it.

Let me put it another way: When I last lived in the US, no one knew who Lady Gaga was and Twitter had about 1 million users (as opposed to 500 million today). Obviously I followed these things and know what they are, but I haven’t experienced them to the same extent as my friends in the US have.

I saw a commercial for the first time recently, for instance, and thought it was pretty funny, but my sisters rolled their eyes when I referenced it because, with the way culture works these days, the ads had already been digested, parodied, autotuned and bemoaned for oversaturation by the time I saw one online during a basketball game.

We are itching to hear your reverse culture shock experiences too! Hit us up in the comments below.