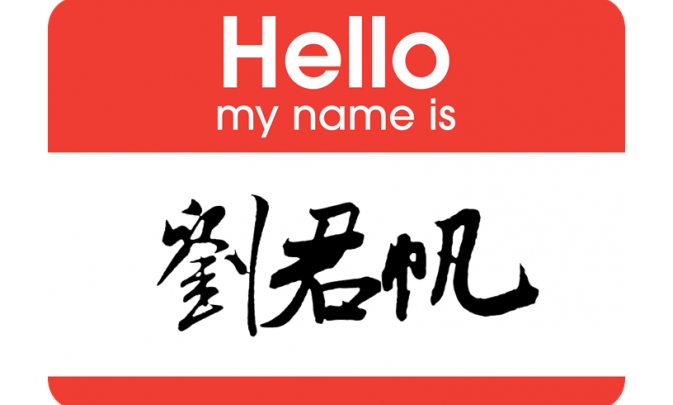 How to Choose Your Chinese Name

I'd always heard that Chinese people put a lot of time into giving their child a good name, there's even a saying about how important a good name is:

Translated it's: "Instead of giving your child gold, teach him a skill; instead of teaching him a skill, give him a good name.”

But I didn't know just how much went into choosing a name until I had my first child and was lucky enough of be put in a two bedroom (as opposed to the regular 8 bedroom) recovery room with a woman who had given birth five days before me.

When we inquired about the little girl and her name, the mother sighed and showed us the dozens of pages of "auspicious" names that they'd printed off and were consulting.

Nearly every waking moment someone – mom, dad or one of the four grandparents – was poring over the papers.

Finding Chinese names for my kids 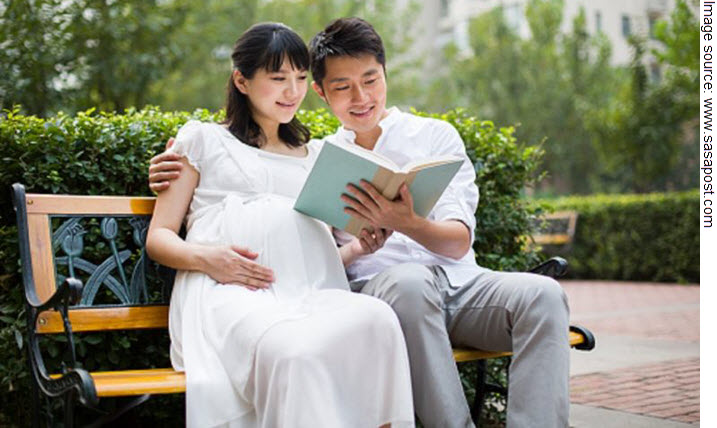 Compared to my roommate, I feel my husband and I didn't put enough effort into choosing our son's name. My husband chose the Chinese name, and thought of it rather quickly, well before our son was even born. He liked the meaning, the sound, the characters and that was that.

Our daughter's name came about in much the same way. This time my husband thought of the name in a dream and wanted to use the same name, but different characters, whether the baby was a girl or a boy.

I picked their English names, which, ironically, took more work than their Chinese ones!

I never did find out the name of my hospital recovery roommate's daughter, but the fact that the grandparents were just as involved in the process as Mom and Dad isn't surprising – a lot of Chinese babies are named by a relative. Grandparents, aunts, and uncles are often called upon to give names to kids.

Back when I taught English classes, students would give a speech about their name. The majority of them said that they were named by someone other than their parents.

My husband's older sister asked him to name her newborn son. He thought he picked a good one: it sounded nice and it had a good meaning.

The boy went by that name until his parents discovered a software which said the name wasn't "lucky" enough.

They changed the boy's name based on what the program suggested!

Besides software and name lists on the internet, some parents even go to fortune tellers for assistance and advice on choosing a name.

What's in a Chinese name? 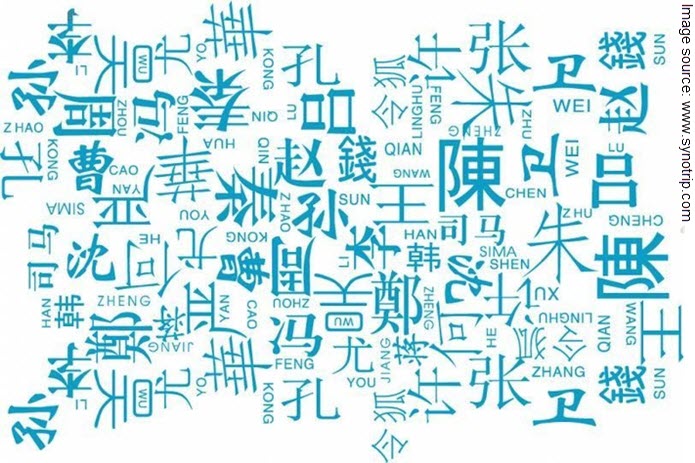 One unique thing about Chinese names is that they use existing words. You can't piece together a few radicals and assign it it's own sound like you can with Western names.

We all know of someone in the West who has a name that looks as though it's been created by randomly putting together a few Scrabble tiles.

On the other side of it, few Western parents would consider giving their child the name "Morning", but in China it's a common name for babies who are born in the morning.

Like Western names, you can have the same pronunciation with different spellings. Just like I know people named Katherine, Kathryn and Catherine, I also know three people named "wáng chén":

Of course, in Chinese, the different characters give each name a different meaning. 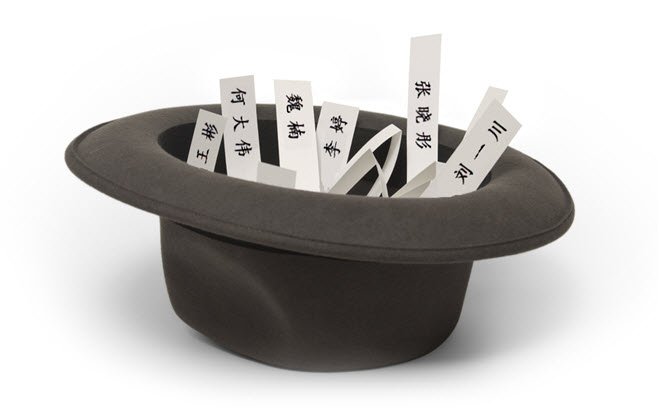 My first name, given by a Chinese colleague, was 爱华 (ài huá)

. After a month in China, it felt good to have a name for the school leaders and non-English speakers to call me.

They tried their best, but "Charlotte" doesn't exactly roll off the tongue for the average Chinese person. Plus, some guy friends were quick to point out that it sounds eerily close to 杀了他 (shā le tā)

But when I started telling my classes of high-schoolers about my name, the room would erupt in laughter.

I thought they laughed because these were classes full of naughty students. However the same things happened in classes one, two and three (the classes of "good" students).

Finally a few brave girls came to me and said that the reason they were laughing was because the name used four Chinese characters.

They also thought my name was hilarious because it used characters that mean "love China" and I'm an American. Obviously, I don't love their country as much as they do, they reasoned.


Read more: Learn how NOT to choose a Chinese name

So I dropped that name and went without a Chinese name for several years. My Chinese name now is simply a transliteration of my given name. It's probably the easiest way to come up with a Chinese name.

It's certainly not a name I'd choose for myself, but somewhere in the process of changing visas and buying a house, I needed to start signing my name in Chinese so I became 夏洛特 (xià luò tè)

. It makes my son's friends laugh, but at least I have a legitimate family name.

Tips for choosing your Chinese name 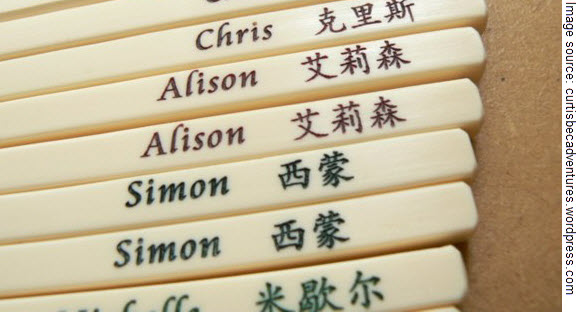 To help you avoid the collective gasps and laughter I experienced when announcing my first Chinese name, here are a few tips to follow:

I was once at a speaking competition and the host introduced the next contestant as having a beautiful name and what a wonderful woman she must be.

, was his male coworker!

Both the guy and the host turned a deep shade of red as he entered the stage. I have no idea why his parents gave him such a name in a country where gender roles are strictly adhered to.

Perhaps this poor guy's parents were hoping that their third son would be a girl and named him as such.

Some names that are masculine:

A few feminine names are:

My husband noticed a recent trend in parents giving their children obscure names. Every year when a new group of preschoolers visit his office to get physicals, he's baffled by at least a dozen names out of the roughly 100 children he sees.

To help your Chinese friends save face, stick with a name that most people will recognize; don't go looking for a character that one will only find in ancient poetry or one that has 60-plus strokes so you can wow your friends with the difficulty of writing your name!

Imagine your name is Wesley Young and you've been studying Chinese for a while. You chose "Yang" as a surname since it sounds similar to your own.

"Wei" is a common name and it would fit well with your given name. But you might get some odd looks when you start introducing yourself as 杨伟 (yáng wěi)

There's another word combination with the same tones and pronunciation, though with different characters. It’s likely to leave a memorable first impression: 阳痿 (yáng wěi) 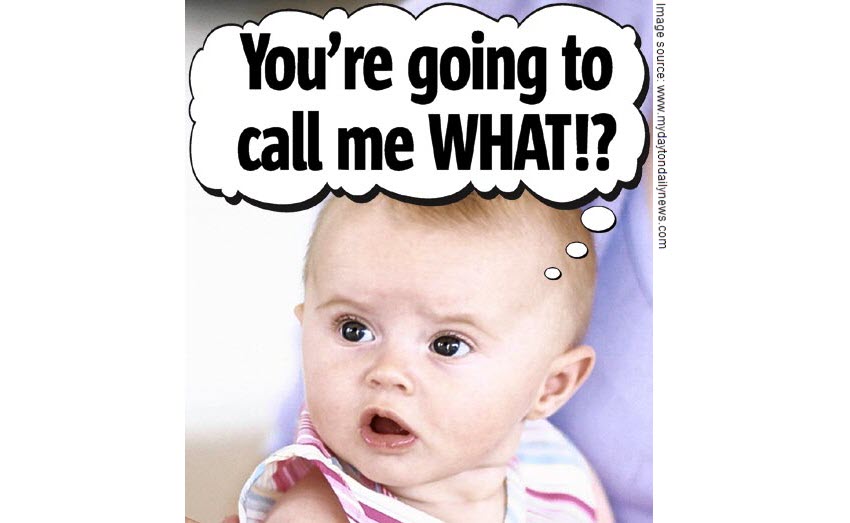 You won't win over many ladies with a name like that!

The Chinese language is so unique in this respect that you're bound to run into other instances like this, so be careful!

Yes, those two North American celebrities have made a killing off of their great speaking and acting abilities, but to Chinese, these names are as laughable as “Spongebob” and “Rainbow” are to Westerners.

Ask a Chinese friend to give you some ideas.

For most Chinese, this will be as easy as it is for you to offer up a dozen English names for a Chinese friend. Although in my case, my friend gave me a name that didn't go over well, which brings us to the final tip...

Before you get too attached to your new name, run it past some friends to get their reactions and comments. We live in a crowd-sourcing world; take advantage of it.

Maybe there's something you missed or there's a new slang word that would put you in the "bad first impression" category.

Do you have a story about how your Chinese name was chosen? Do you want help choosing your own? Tell us in the comments below!