Thanks to the advent of Chinese streaming services like Sohu and Youku, it’s easier than ever for Chinese fans to watch their favorite foreign TV shows.

While pirated versions have been available online for years, lately Western content providers have struck deals with Chinese platforms to allow legal distribution of high-quality, subtitled episodes, resulting in a big jump in viewership.

I actually end up watching a lot of shows on Youku myself just because it’s faster and easier (and it’s fun to see the subtitles and Chinese versions of proper nouns, but that’s just because I’m nerdy about that stuff).

Anyway, here are some foreign TV shows that have achieved immense popularity in China along with some thoughts on why. 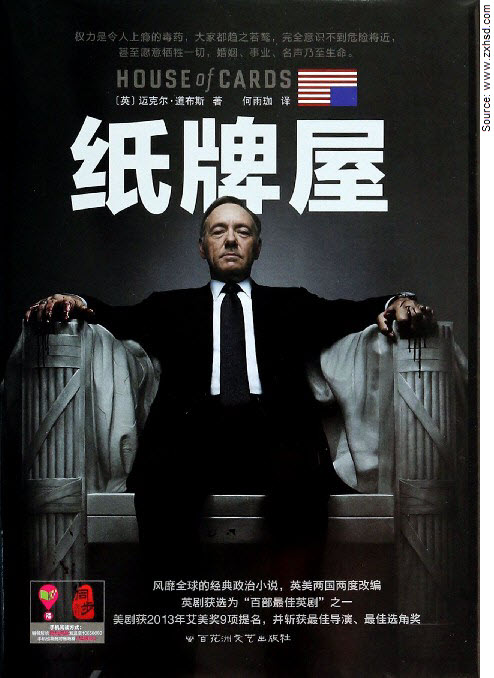 This Netflix drama is a hit Stateside, but in China "zhǐ pái wū (纸牌屋)" has proven unusually popular for a complex drama – generally the shows that play well here are comedies or action drama more broad-appeal in terms of style.

There are a variety of reasons for its popularity, but the most basic one is simple curiosity.

In a country where politics is an opaque process far removed from the average citizen, a show that frankly depicts the mechanics and dark side of political maneuvering provides a perspective that the average Chinese might never otherwise have.

The show is so popular, particularly in Beijing, that it has inspired fan-made parodies including this version of the credits sequence featuring the familiar time-lapse and tilt-shift cityscape shots, but this time of China’s capital rather than America’s.

There’s also influence here from the substantial Chinese curiosity about America. While many Chinese are familiar with American pop culture output, a show about how the government works is something that just hasn’t really been seen here before (this is, of course, part of why it’s a popular show in the US too).

There might also be some schadenfreude from Chinese who resent their countrymen’s “idealized” vision of the US, based on my experiences.

Really, though, House of Cards has struck a chord in China because it helps viewers here see that corruption, political infighting and downright evil leadership isn’t just a Chinese problem; it exists in every government.

It’s no coincidence that the show has become popular just as more and more corruption cases hit the headlines. 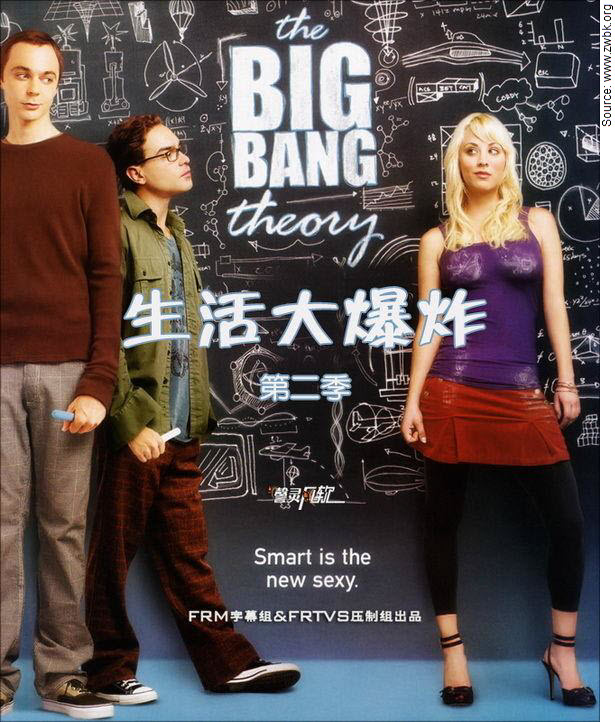 For years, The Big Bang Theory has been the most-watched TV show in the US, so it’s not particularly surprising that it’d prove popular elsewhere.

That said, there’s an enduring and viral element to its fame in China that I find interesting. Literally EVERY university student I’ve met has asked me if I like the show and admitted to streaming it on a weekly or daily basis in their dorm room.

Why is the show such a massive hit?

For one, high-quality versions with subtitles are incredibly easy to access, thanks to licensing deals with the creators.

This may not sound like much, but "shēng huó dà bào zhà (生活大爆炸)" was one of the first shows to do this, and in a landscape of pirated or blurry videos, a crisp HD version with accurate, well-made subtitles is a blessing for Chinese with limited English skills.

Streaming services estimate that episodes of the show were streamed some 1.4 billion times before the show was temporarily pulled from the ‘net this spring. That’s approximately one episode for every Chinese person, which is amazing.

More to the point, though, the show resonates in China because of the more academic-focused culture.

The show is centered around high-achieving researchers at one of America’s top universities, and so for a lot of Chinese students and younger people it’s almost aspirational, a look into the lives of the people they someday hope to see around campus.

A lot of people say that the show is popular in China because Chinese people are nerdier and identify with characters in that respect, but I don’t think it’s that simple.

My view is that the show’s unusual slice-of-life depiction – high end academia – comes off as fresh and relatable for Chinese, particularly students.

This is also reflected in the Chinese translation of the show’s name: "shēng huó (生活)"

means “life,” not “theory,” suggesting that it’s the lifestyles of the characters that appeal most to Chinese fans. 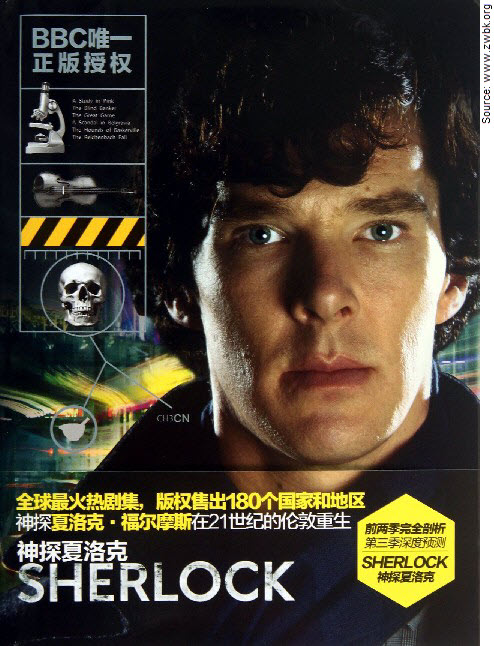 This BBC drama about the classic Arthur Conan Doyle character has proven popular in both the US in China for a host of predictable reasons: great performances, strong writing, familiarity with the character, etc.

But in China, for some it has become something of an obsession.

There are your standard Sherlock viewing parties at bars and apartments, to be sure, but also crazy stuff like a Sherlock-themed cafe that opened in Shanghai last year and a surprisingly plausible theory about a homosexual relationship between Watson and Sherlock.

Precisely why "shén tàn xià luò kè (神探夏洛克)" enjoys such a large and devoted audience in China is hard to pinpoint, but it has a lot to do with the charms of Benedict Cumberbatch.

In stark contrast with brawny, rugged action star-types, Cumberbatch plays the title character with a sort of unassuming, subtle handsomeness that resonates more with Chinese viewers.

His intelligence is also part of his sex appeal, and I can tell you first hand that Chinese girls tend to swoon over his dry wit and ability to deduce the culprit of a crime in a flash.

There’s also the Chinese penchant for classic, storybook versions of Western countries, which Sherlock does a great job of depicting.

Regardless, the cult of Sherlock in China is an amazing thing to watch, and the show’s producers know it – they made sure China was the first market to see release of the show after the UK.

His loyal sidekick Dr. Watson, though, has been given the nickname “huā shēng (花生)"

Why? Because of the phonetic similarity to the common transliteration for Watson, “huā shēng (花生)".

So, when you hear Chinese fans going on and on about their love for Curly Fu and Peanut, you’ll know what they mean. 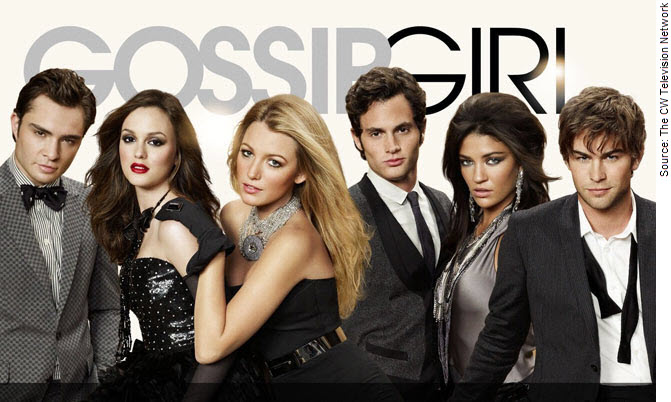 I have to admit that I’ve never seen a single episode of this show, but I can guarantee you that just about every Chinese female between the ages of 15 and 30 has.

The literal translation of the name is actually a bit different from the English: "nǚ hái (女孩)" just means “girl,” but "fēi wén (绯闻)"

means “sex scandal,” which really cuts to the chase in terms of what viewers should expect from the show, and hints at why it’s been such a big hit in China.

For a conservative culture like China’s, and especially for high school and college students with intense study schedules and little time for socialization, there’s a fascination with the debaucherous, sinful student lifestyles that "fēi wén nǚ hái (绯闻女孩)" depicts.

Add that to the exotic, high society Manhattan setting and it’s a must-watch for Chinese students.

I'll leave you with these four of the most popular western shows in China. There are others that have found massive followings, and a quick search through Youku would give you an idea of what they are, but from my experience, mentioning any one of the shows above is a guaranteed icebreaker.

Now that you have a general understanding of why these shows are so popular in China, here's a quick question for you: Do you think the things that make these shows fascinating for viewers in China are universal or uniquely Chinese? Let me know in the comments below!