When I tell people back home in the UK that I can speak Chinese, their responses are often something like: “Seriously? That sounds really hard, no way I’d want to learn!”

As Yangyang wrote in a recent blog post, Chinese has a reputation as a really tough language for Westerners.

But does Chinese deserve its super-difficult reputation? I’ve been learning Chinese for years (and have made lots of mistakes along the way), and in my experience Chinese has its own set of unique challenges that make it different from learning other languages.

But, I’ve also found that Chinese isn’t as scary and confusing as it seems, and that all of these challenges can be overcome.  That’s why I want to share my experiences and advice about the biggest challenges of learning Chinese in this blog post.

1. You can’t just “pick it up naturally” I made my first trip to China in 2010. Naïvely, I arrived with a just a dictionary and a few smartphone apps, and assumed that I could pick Chinese up through watching TV and movies, reading, and listening to the world around me. Needless to say, I returned home having learned next to nothing.

This was totally different to my experiences learning European languages (I’d lived in Colombia previously, and because Spanish is a European language and quite similar to English, I’d found I could learn a lot just through everyday life).

Because Chinese is so different from English, in the early stages there is absolutely no substitute for hard, active learning and a structured curriculum that introduces Chinese in a way that Westerners can relate to.

(Luckily, once you get more advanced in Chinese and have a big enough base vocabulary, it is possible to pick up new things naturally!).

– Mandarin Chinese (literally “common language”). But, I live in Shanghai, where the local language is 上海话  (shàng hǎi huà)

is the national language taught in almost all Chinese schools; other cities, towns and even villages in China have their own languages or dialects. , I often have trouble speaking with people who have limited Mandarin or even just a strong local accent.

An easy way to overcome this is to write things down: luckily, the writing system is the same across all Chinese languages, so even if you can’t talk to each other, you can write.

For example, my former landlord had such a strong Shanghai accent (even when speaking Mandarin) that I really struggled to understand him. We got around this through communicating mainly by text message!

3. Chinese people aren’t used to speaking to Westerners in Chinese Last week, I travelled to a small city outside of Shanghai. On my way home, I called a car on 滴滴出行 (dī dī chū xíng)

– China’s Uber to take me to the train station. When the driver arrived he was totally astonished and asked me repeatedly if it was me who had called him. He just couldn’t believe that a foreigner had learned the (relatively simple) Chinese required to call a car.

While the fact that relatively few foreigners have learned Mandarin means those who do win easy praise, it also brings difficulties as Chinese people are not used to speaking with non-Chinese people in their own language.

For example, if I’m speaking English with Chinese friends, I always make an effort to speak clearly and not to use too many slang words.

But many people I meet have never spoken to a foreigner in Chinese before, so they’re not used to slowing things down and sometimes assume that because I didn’t understand one particular word I don’t understand anything at all.  Let's face it: there's a difference between textbook Mandarin and how Chinese people actually speak.

I’ve found that the best way to deal with this is just to tackle anything you don’t understand head on with:这是什么意思？(zhè shì shén me yì si)

– what does this mean? And, if necessary, ask your conversation partner to 说慢一点 (shuō màn yī diǎn) 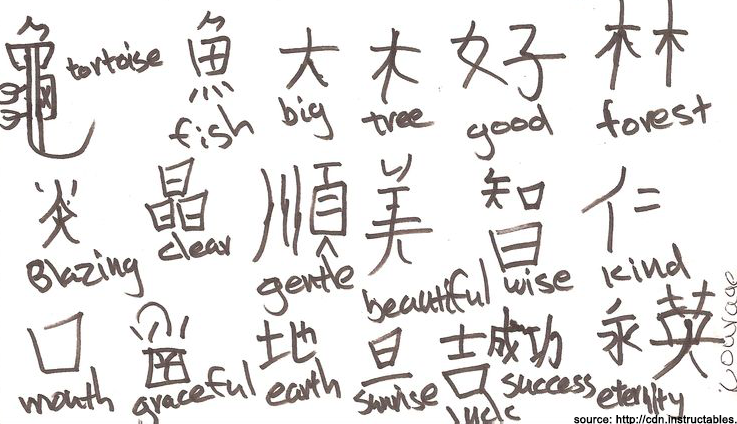 I recently had to go to the local government offices to do some residence-permit related admin. I had been chatting easily with the official on duty, explaining my situation. He complimented me on my Chinese, and I felt pleased with myself. Then, he asked me to fill in a form.

While I could read the form without problem, and would have happily been able to type the answers on the computer, I awkwardly had to confess that I didn’t know how to write some of the necessary characters by hand, and ask him to help me fill it in.

While it’s true that Chinese characters have basic building blocks (radicals) that can make them easier to learn, there’s no way around the fact that writing Chinese is a lot harder than writing using an alphabet!

The good news is that writing using a computer or mobile phone is much, much easier. Not only that, but learning to type in Chinese actually teaches you to recognize characters, and is a big part of how Yoyo Chinese helps you memorize new characters.

Luckily, situations like my embarrassing moment with the government form don’t happen very often, and – although you’ll definitely impress people if you can write fluently by hand – learning to write by hand is just not necessary to learn Mandarin!

You can learn how to set up the Chinese keyboard input on all your devices here.

5. Lots of common Chinese words are really hard to translate into English:

I’d only been learning Chinese for a few months when a colleague asked me if I wanted to “go out to play”. “Huh? We’re not children”, I thought. “Maybe she means play with her kids?”

Actually, she wanted to go see a movie. The misunderstanding happened because the Chinese word 玩儿 (wán(r))

doesn’t translate easily into English. It can mean “to play” (like kids), but it can also mean “to hang out”, or “to have fun together” (for example going to the mall, or going for cocktails).

Chinese has loads of words that are really hard to translate. But, as a beginner, I needed a patient, English-speaking teacher who knew all about Chinese and Western culture to help me understand these nuances.

And ultimately, these unique words are one of the best parts of learning a new language.  Eventually, you will naturally want to use a Chinese word -- even when speaking English -- if it more perfectly describes what you're talking about.  Of course, Chinese people who have learned English do the same thing when there is a word in English for which there isn't a perfect Mandarin equivalent.

What do you think the biggest challenges of learning Chinese are? Do you have any tips to share for overcoming them? We’d love to hear from you in the comments section!